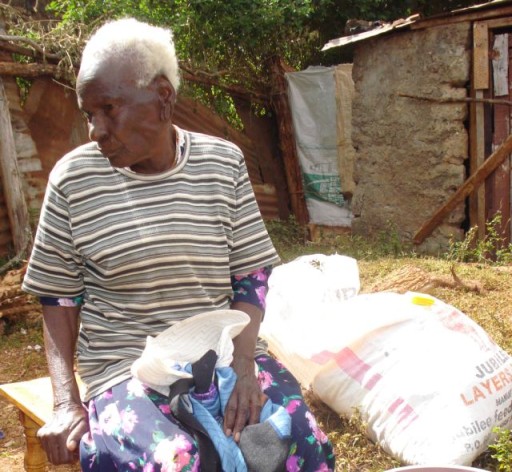 In the face of severe food shortages and with no relief aid, the elderly like Zeinab Wambui, from lower Mukurweini, Central Kenya, are facing very tough times. Credit: Miriam Gathigah/IPS

NAIROBI/NEW YORK, Oct 17 2013 (IPS) - Wambui Karunyu, 72, and her seven-year-old grandson are the only surviving members of their immediate family.  Karunyu’s husband and five children all succumbed to the hardships of living in the semi-arid area of lower Mukurweini district in central Kenya.

In 2009, a drought struck parts of central and southeast Kenya, leaving 3.8 million people in need of food aid. Four years later, conditions in the area remain dire. According to the regional Drought Management Authority, while the upper parts of Mukurweini receive an annual rainfall of 1,500 mm, lower Mukurweini only receives 200mm.

A new report by the Overseas Development Institute (ODI), a U.K. based think tank, identifies Kenya as one of 11 countries most at risk for disaster-induced poverty. The report, entitled “The geography of poverty, disasters and climate extremes in 2030”, warns that the international community has yet to properly address the threats disasters pose to the poorest parts of the world.

The report includes locations where both poverty and natural disasters will likely be concentrated in 2030; and in many instances, these locations overlap.

Hazards and vulnerability to poverty in 2030
Source: Overseas Development Institute

However, the severity of disasters – such as drought, floods and hurricanes – depends on what “disaster risk management” policies the government has put in place, according to ODI.

In 2010, for example, the magnitude 7.0 earthquake in Haiti killed 11 percent of people who felt its tremors, while the Chilean earthquake – of an even higher magnitude, 8.8 – killed 0.1 percent; and in 2008, Cyclone Nargis killed 138,000 people in Myanmar, while Hurricane Gustav of similar strength killed 153 when it struck the Caribbean and the U.S.

“Slow-onset” disasters – such as the drought afflicting Karunyu and her grandson in Kenya – are often the harshest setbacks for development, especially in poor, rural areas that lack social safety nets, according to ODI.

“I plant maize and beans every season, but I harvest nothing. I never stop planting because I hope that this time will be better than the last time. But it’s always the same, loss and hunger,” Karunyu tells IPS.

Simon Mwangi, a resident of Mukurweini and a service provider with the Dairy Goats Association of Kenya, an association of small-scale goat farmers, tells IPS that Karunyu’s story is not unique.

“Life here is characterised by poverty and hunger. A great majority live in rural areas, and they are farmers. Due to prolonged dry spells, the situation is alarming, since they have no other livelihoods,” he says.

Mwangi notes that unreliable rainfall, frequent droughts and the inability of residents to adapt to harsh climatic changes has affected the growth of a variety of crops, such as maize and beans, which used to grow successfully.

“Lower Mukurweini is no longer a corn zone, but farmers continue to plant maize with no success. There are drought-resistant crops that can do well here, including fruits, such as pineapples and indigenous mangoes. But the lack of extension officers has made it difficult for people here to adapt to the dry climate,” he says.

There is also a lack of NGOs and aid workers in Mukurweini to address the residents’ plight. The International Fund for Agricultural Development (IFAD) operated in Mukurweini for nine years, but left in 2011. “Things were much better when [IFAD] ran irrigation and trainings for farmers. Some sub-locations were doing much better, and there was food. But many parts of lower Mukurweini are now at risk of starvation,” says Mwangi. 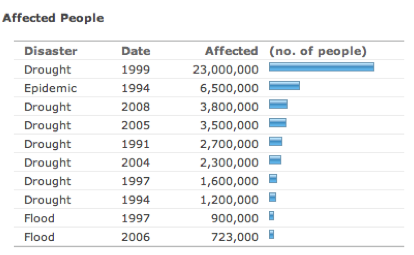 In July 2012, U.N. Secretary-General Ban Ki-moon assembled a team of 27 advisers to help him achieve the lofty goal of ending world poverty. Ten months later, the team – known as the High Level Panel of eminent persons (HLP) – produced a report that advised Ban, among other things, to “build resilience and reduce deaths from natural disasters” by a percentage to be agreed.

The HLP recommended this target on disaster-mitigation to be included in the post-2015 development agenda, a list that would replace the eight current Millennium Development Goals –which do not include the word “disaster” once.

The intensity of natural disasters is expected to increase with climate change. ODI predicts that up to 325 million impoverished people in 49 countries will be exposed to extreme weather conditions by 2030.

“During the day, you barely see anyone outside, it’s too hot. Even the earth becomes too hot, you cannot walk barefoot,” says Mwangi.

“Without food or access to water, the elderly starve and fade away quietly,” he says.