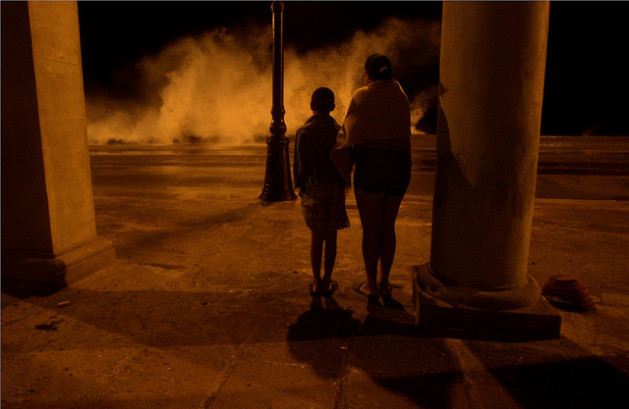 Flooding in areas near the malecón, or seaside drive, in Havana is increasing in intensity and frequency, according to a study by the Institute of Meteorology. Credit: Jorge Luis Baños/IPS

The WDR is the Bank’s most comprehensive publication, released yearly since 1978. This year’s report looks at how managing risks, ranging from economic crises to natural catastrophes and health disasters, can end poverty and increase equity.

“If governments look at development as an investment, they’ll necessarily have to address the crucial question of what are its expected returns.” -- Georgetown's Bardia Kamrad

“Risk management can save lives, avert economic damages, and can provide resilience and prosperity by allowing people to undertake new endeavours,” Norman Loayza, director of the 2014 WDR, said at the report’s launch here in Washington.

A term usually associated with finance, risk management in development looks at those sets of policies that can help alleviate the negative effects of natural disasters, economic shocks, or health crises.

“A practical example of successful risk management would be for a flood-prone country to allocate funds for simple projects such as building dams, or making sure houses are built on stilts,” Anne Ralte, the director for the Monitoring and Evaluation programme at the International Relief  and Development (IRD), a non-profit organisation here, told IPS.

Loayza and his team are warning that there are currently several obstacles to successful risk management in pursuit of development aims. These include the behavioural failures of decision-makers, lack of resources, and low levels of information with which to make decisions.

For instance, a farmer’s ability to withstand a drought can be considerably affected by how previous yields were managed. It will be up to local governments to ensure that the proper agricultural strategies to counter droughts are in place.

Yet if governments and decision-makers can create successful environments for managing risks, these trends can be reversed, Loayza suggests. In the vision laid out in the report, governments should be at the forefront of this effort, by providing tools for risk management in the financial sector and by creating a risk-free environment for vulnerable people.

“We’re advocating a sea change in the way risk is managed,” World Bank Group President Jim Yong Kim said Monday. “Our new approach calls for individuals and institutions to shift from being ‘crisis fighters’ to proactive and systematic risk managers.”

Governments and international institutions are at the centre of this new strategy. Decision-makers are called upon to take a number of preventive measures aimed at limiting the uncertainty that is associated with risks.

Bardia Kamrad, a professor and an expert on risk management at Georgetown University’s School of Business, here in Washington, says that one way governments can approach this new idea would be by looking at development as an investment.

“If governments look at development as an investment, they’ll necessarily have to address the crucial question of what are its expected returns,” Kamrad told IPS. “Asking that sort of question would be a great starting point for governments to create the right kind of risk management environment.”

Once development is seen as an investment, he suggests, the international community could more easily tackle the inherent risks associated with it, such as financial shocks and natural disasters.

“If governments around the world start taking an active role in managing these risks, this can be very meaningful,” he says. “The best way would be for governments to actively absorb the risks the WDR identifies.”

Indeed, beyond top-down processes, the WDR also finds that preparing people for potential risks induces them to be less risk averse in the first place. For instance, having access to rainfall insurance can encourage farmers to invest in fertiliser, seeds and other such products, instead of refraining from spending money for fear of future droughts.

These are the types of strategies the World Bank is now calling on governments around the world to focus upon in coming years.

At the same time, there are areas where the report may be lacking, says Tom Mitchell of the London-based Overseas Development Institute. He notes that the report is missing a careful analysis of future developments.

“Despite highlighting dynamic risk contexts, there is precious little analysis of the future,” Mitchell said Monday in a statement. “[For] an organisation so publicly focused on ending extreme poverty by 2030, this missing context and perspective is strange.”

However, “risk management in today’s world has taken on a very new perspective and structure,” Kamrad says. “The new WDR shows that we’re heading in the right direction.”

The publication of the WDR also marks a new way of functioning for the World Bank itself. The new strategy will now see the World Bank including uncertainty- and risk-related components to its country partnership frameworks, the overarching processes that define the bank’s relationships with individual countries.

“So far, [the World Bank] has been very risk-averse, trying to avoid risks when we are faced with uncertainty,” the WDR’s Loayza says. “Instead, we should actively tackle uncertainty with rigorous risk management.”

Indeed, although there are several downsides to uncertainty, there is also a positive side to it, Georgetown University’s Kamrad says.

“If we look at the upsides of uncertainty, we’ll realise that there are also many opportunities involved with risks,” he told IPS. “If risks are properly managed, and governments implement strategies that successfully mitigate risks, we’ll block the downsides of uncertainty and benefit from its upsides.”

This means that, instead of avoiding risks, governments will need to adopt a more preventive approach. Countering financial shocks and taking steps to prepare for or mitigate natural disasters means that governments will increasingly need to strengthen their banking sectors, and build stronger infrastructure that can better counter natural catastrophes such as earthquakes and tsunamis.