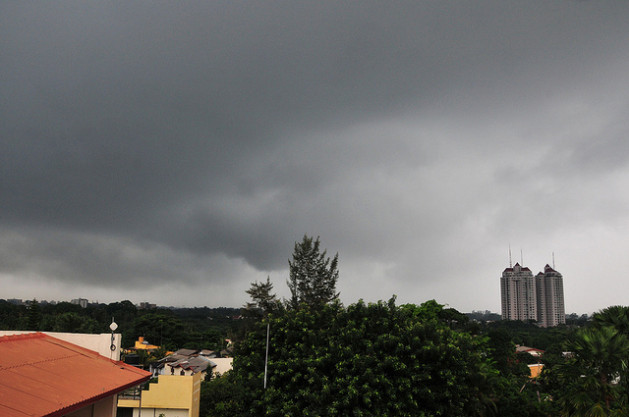 The gathering rain clouds in the Sri Lankan skies are a source of trepidation for many. Credit: Amantha Perera/IPS

COLOMBO, May 28 2013 (IPS) - The monsoon in Sri Lanka is always a much-awaited event. There is something about the sight of the gathered clouds, the washed trees and the drenched landscape that stirs romance even in the most hardened of souls.

The monsoon rain now comes to Sri Lanka mostly in short bursts, lasting some 15 minutes, accompanied by thunder. One minute it could be calm and sunny, the very next, winds could pick up, the delicate coconut palms sway dangerously and the heavens descend.

The short bursts of rain are a common scenario in the western plains. It is only when the rains decide to stay longer that their beauty recedes and the beast takes over.

Cities and villages get flooded, roads are jammed and thousands are left stranded, sometimes for days.

The island nation has had a brush with this scenario already this year, when Cyclone Mahasen swept past its eastern cost, leaving eight people dead, over 100,000 stranded and over 2,000 structures damaged.

There are also few who can erase the memory of the Dec. 2004 tsunami that left 35,000 people dead and close to a million displaced.

That disaster struck Sri Lanka hard, because there was no warning system in place.

The tragedy left the nation wiser, and one of the first things it did in the aftermath was to spruce up its early warning system and disaster mitigation effort.

“We are used to the monsoon and cyclones now and, more importantly, we are better prepared than ever before,” Sarath Lal Kumara, deputy director at the Disaster Management Centre (DMC), told IPS.

The DMC came into being in August 2005 as the nodal agency for disaster risk management in the country under the National Council for Disaster Management (NCDM), which later became the ministry of disaster management and human rights.

Each of Sri Lanka’s over 300 divisional secretariats further has a regional disaster management committee, the lowest administrative body in the government’s disaster management system. Every unit has a separate budget allocation for emergencies; funds are also allocated on a case-by-case basis by capital Colombo.

The DMC too has its own disaster management units in each of Sri Lanka’s 25 districts that make up the country’s nine provinces. Colombo once again coordinates their activities, but every unit has a senior manager of its own as head.

“They are stationed in the regions so that we can take quick decisions without having to go back and forth,” said Kumara. The units have also been provided with the resources to disseminate early warnings and coordinate initial rescue and relief work, he added.

Other non-governmental organisations too have upgraded their disaster monitoring and assistance capacities. The Sri Lanka Red Cross Society, for instance, has district-level disaster management units and routinely mobilises thousands of its volunteers in early warning and relief work.

Staffers and volunteers also go through regular refresher courses on disaster preparedness. All of which came in handy, most recently when Cyclone Mahasen struck Sri Lanka.

“I think we are in a better position than we ever were to meet natural disasters,” Bob McKerrow, head of a delegation for the International Federation of Red Cross and Red Crescent Societies (IFRC), told IPS.

It is just as well that Sri Lanka is investing some resources in early warning and preparedness, say experts. South Asia, they warn, will be subjected to a barrage of extreme weather events, and will have to deal with them on a long-term priority basis.

Over 25 million people have been displaced in the region between 2011 and 2012 due to natural disasters, according to the Internal Displacement Monitoring Centre in Geneva.

Millions are at risk in South Asia due to extreme weather events, Bart Édes, director of the poverty reduction, gender and social development division in the Asian Development Bank (ADB), told IPS.

“All around South Asia,” he said, “in addition to the current vulnerability to cyclones, flooding and drought, those living along South Asian coastlines confront the slowly rising seas.”

With millions affected by disasters, already stretched resources like water, healthcare, schools and other infrastructure can collapse under renewed pressure, Édes added.

“Environmental migration is exacerbating the urbanisation trend being witnessed across South Asia,” the ADB official told IPS. “The physical and social infrastructure of many cities is already stretched to capacity.” As a result, climate-related migration was becoming a serious issue in the region, he added.

A recent study by the World Food Programme (WFP) and the Sri Lankan ministries of disaster management and economic development on the impact of the December 2012-January 2013 flooding offered a glimpse into the scale of damage that natural disasters can inflict.

Titled the ‘Rapid Flood Assessment Report’, it noted that over half a million people in Sri Lanka’s northern, north central, eastern, southern and northwestern regions were affected in early January by the flooding.

They have, in fact, been hit by a double whammy, as 67 per cent of the flood victims surveyed said they were also impacted by the 10-month drought preceding the floods.

An earlier assessment by the IFRC in November 2012 had put the number of drought-affected in Sri Lanka at over 1.2 million.

The WFP report also found 37 per cent of the households surveyed were severely ‘food insecure’ and 44 per cent were ‘borderline food insecure’. And the bulk of those who bore the brunt of the twin disasters were employed either in agriculture or in casual jobs.

“Loss of livelihoods, extreme poverty and losses to cultivation are the key drivers of food insecurity, among the flood-affected households,” the report noted. It also pointed to the fact that over 67 per cent of the flood-affected lived below the poverty line.

DMC’s Kumara cited anecdotal evidence to suggest that these victims of disasters were moving into cities, especially when harvests failed, looking for an income.

“We cannot stop natural events, we cannot alter them,” Kumara said. “What we can do is to be prepared for the worst-case scenario. God willing, we are on that track.”

Ask Kusumlatha Tammitta, who lives in the remote village of Mamaduwa in the Vavuniya district of Sri Lanka’s Northern Province, if this is enough, and she tells you that what they really need is better, accurate forecasting that will indicate how the monsoon will be.

Till that is available, people like her are condemned to live at the very edge of existence.