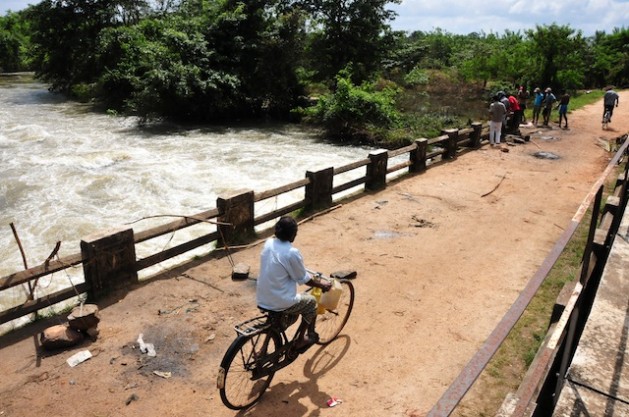 COLOMBO, Mar 12 2013 (IPS) - Sri Lanka has paused for breath after the extreme weather conditions last year that many associate with climate change.

The reservoirs had hit new lows after a dry spell. That has now changed. “Thank god the weather has helped, all the reservoirs are at spill level,” finance secretary P. B. Jayasundera announced last month. “It is a kind of a bonus.”

During the first ten months of the year, regions ranging from the north through the east to the south and south-west suffered a serious drought. When the drought was finally broken in November, the weather hit the other end of the spectrum.

Since November 2012, the same regions have suffered major floods on at least three occasions. The drought had affected at least 1.2 million people, according to the Sri Lanka Red Cross and Red Crescent Society. The ensuing floods left at least a million stranded.

It was the dry weather that proved challenging for Jayasundera and other decision makers tasked with keeping the economic engine in top gear. The falling reservoir levels placed a heavy burden on thermal power generation. Usually, around 40 percent of the country’s power demand is met through hydro-generation. In some years when the rains have been exceptionally good, like in early 2011, it has gone up to 55 percent.

By August 2012, at the worst of the drought, hydro generation capacity was 17 percent. The bulk of the demand was met by thermal power generation using furnace oil imports.

The drought meant the country paid high oil prices for its power needs. Around a fifth of the island’s imports last year were fuel, according to the Central Bank.

Jayasundera admitted there were other effects as well. The Department of Agriculture warned that 23 percent of the staple rice harvest could be lost due to the drought. Rice prices were up 12 percent by the beginning of 2013.

Finance officials have been publicly acknowledging the impact of extreme weather events. The trail of destruction they leave can be long-term, and they are hard to predict, at least for a nation with poor technological resources.

“Dealing with climate change is a costly business,” W. L. Sumathipala, senior technical advisor to the Ministry of Environment and former head of the national climate change unit at the ministry told IPS.

Sri Lanka’s carbon footprint is small but that does not insulate it from changing weather patterns, he said. He said the country’s dry zone, especially the eastern region, is becoming drier. The region is home to some of the largest rice production areas of the country.

“There was a rhythm for the monsoon that the country was used to in the past; it has been broken in the past few years and every aspect of our lives is getting affected,” Sumathipala said.

The 233-million dollar Metro Colombo Urban Development Project, which began last year and is due to be completed by the end of 2017 aims to flood-proof the capital. Colombo and its suburbs are the economic heart of the country, accounting for at least 50 percent of the national GDP.

The capital is also home to 2.3 million people, more than a tenth of the island’s population of 20 million. The population density here is 3,330 persons per sq km, ten  times the national average.

Sumathipala said rising sea levels were another cause for concern. According to the Coast Conservation Department, some parts of the island’s 1,500 km coastline have recorded annual erosion rates of more than five metres. Some of the most vulnerable coasts are located just north of the capital.

“What if sea level rise becomes really bad and we have to move people and businesses away from the coast, imagine the cost then,” Sumathipala said.

For the time being Jayasundera is hoping that the quirks of nature can work in the country’s favour, at least occasionally. “We feel we can get a premium on potential growth because of favourable weather conditions,” he said.

If more power generation can be moved over to hydro, the effect will be felt immediately. It costs less than a third to generate a unit using hydropower compared to thermal generation.