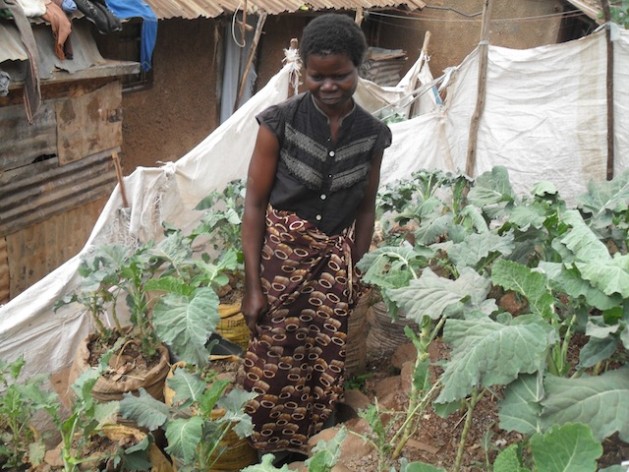 Alice Atieno attends to her vegetables, right on the doorstep of her shanty in Kibera slum. Credit: Miriam Gathigah/IPS

NAIROBI, Aug 9 2013 (IPS) - Tucked deep in Kenya’s sprawling Kibera slum is the shanty that Alice Atieno calls home. It is just one among many small, badly-lit shacks built close together in this crowded slum where an estimated one million people live on about 400 hectares.

But right on her doorstep stalks of green leafy vegetables grow in soil-filled sacks. For the mother of six, these kale plants are the source of her livelihood.

Her children have learnt to go about their play without knocking the plants over. “Children in the slum understand hunger, they stay clear of the plants. They know that it’s where their food comes from,” Atieno tells IPS.

This is urban farming for slum dwellers. “I grow seedlings in sacks filled with soil. I usually grow vegetables like kales, spinach, sweet pepper and spring onions,” Atieno says.

According to Map Kibera Trust, a non-governmental organisation that seeks to improve the participation of Kiberan residents in policy processes by providing them with information, sack farming increases weekly household income by at least five dollars and can produce two or three meals per week.

“This is significant since the average household earns between 50 and 100 dollars per month,” economist Arthur Kimani tells IPS.

Statistics from the Kenya Agricultural Research Institute show that more than 10 million of this East African nation’s total population of 40 million are food-insecure – the majority of whom live on food relief. For these, sack farming is proving to be a much-needed solution.

Kiama Njoroge, an agricultural extension officer in Central Kenya, says that sack farming is healthy and costs little, since the materials are readily available and the low-labour way of producing wholesome foods is simple.

“Foods grown in a sack are also free of chemicals,” he tells IPS.

“Children in the slum understand hunger, they stay clear of the plants. They know that it’s where their food comes from.” -- Kibera sack farmer Alice Atieno

Peris Muriuki, a sack farmer, agrees. “One sack costs about 12 cents, some farmers buy the soil for close to a dollar but most of us just collect it from where we live. Stones are readily available, on the roads, and can even [be found on] construction sites,” Muriuki tells IPS.

Courtney Gallaher is an assistant professor at Michigan State University researching food systems and sustainable agriculture. Her research on urban agriculture in Kibera reveals that “most households in Kibera spend 50 to 75 percent of their total income on food. Sack farming can generate about 20 to 30 dollars in revenue per month for farmers that sell some of their vegetables, excluding water expenses.”

“Urban slum areas have become notorious for sewer farming, placing unsuspecting consumers at great risk for diseases such as cholera, amoeba, typhoid and even cancer,” Patrick Mutua, a public health expert with the Ministry of Health tells IPS.

“The sewers that these farmers use comes from industries and contain heavy metals such as lead and mercury, placing consumers at risk of cancer and kidney failure,” Patricia Mwangi, another public health expert, tells IPS.

“Not only does exposure to lead interfere with the development of the nervous system, it can also lead to permanent learning and behaviour disorders,” Mwangi says.

But unsuspecting Kenyans have been consuming foods rich in such heavy metals. Some of these foods have been grown by Kibera resident Fenice Oyiela.

Showing great tolerance for the stinging stench of open sewers, and oblivious to the health implications, Oyiela uses her bare hands to direct sewer water through the narrow troughs she has dug in her land.

Oyiela, who has been growing vegetables such as kale, African amaranth and arrowroot at a sewer line adjacent to the Kiberana slums, says that her market base is overwhelming.

“There are days I sell up to 10 bags of vegetables. Lorries collect them from me to take to Nairobi’s leading food markets such as Marikiti, Gikomba and Muthurwa,” Oyiela tells IPS.

The Ministry of Agriculture statistics for 2010 show that of the 30 percent of Nairobi residents engaged in urban farming, the majority use sewer water.

Consequently, sack farming is emerging as a solution, especially among those with no land on which to farm.