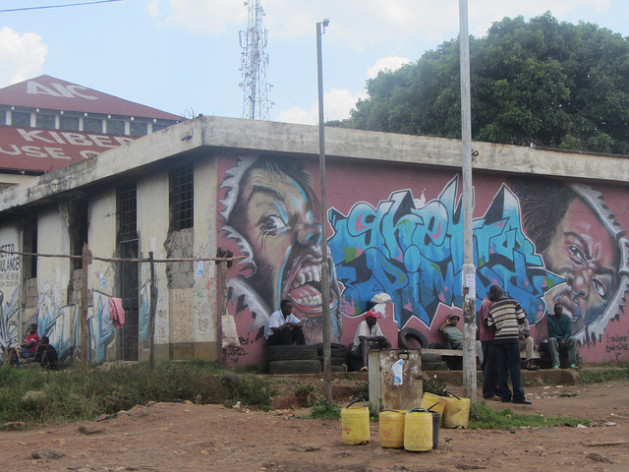 This area in Kibera Slum was among the most affected by the 2007 tribal clash. Residents fear that the controversy over land ownership in Kibera may spark similar violence. Credit: Miriam Gathigah/IPS

NAIROBI, Jan 3 2014 (IPS) - Controversy continues to brew here over ownership of the land under Kibera slum, one of Africa’s largest.

Nubians who have lived in the area for more than 100 years want Kibera registered as Nubian land, but their efforts are opposed by countless Kenyans who over the past six decades have also settled there.

“People here are ready to fight for what is theirs.” -- Gary Otieno

Nubians first arrived in Kenya as Sudanese soldiers in the British army during the late 19th century but went unrecognised as an official ethnic group until the 2009 census.

Unable to return home after the Second World War, the colonial government settled the soldiers and their families in the southwest outskirts of Nairobi. The land on which they were relocated was named Kibra, a village which grew into Kibera.

Although Nubians have since laid claim to Kibera, they were never legally recognised as its owners and the land still officially belongs to the government.

“My grandfather Deyeb Aljab was among the first Nubians to be settled in Kibra,” said Hussein Dong’, a landlord in Kibera. “He owned 1.6 acres but we were never given land title deeds.”

The Nubian community, says Dong’, is “concerned over the growing animosity towards us by the other tribes over government’s plans to issue us with land title deeds for 288 acres in Kibera slum.”

But many residents say that they are not against the Nubian community owning land in Kibera, only concerned with their own parcels.

Gary Otieno, who lives in Makina, one of the 13 villages in the slum, told IPS that residents “want the government to share the land in Kibera slum fairly amongst all the tribes that live here.”

“Some of these Nubians have already sold their shanties to people from other communities,” said Otieno. “Will the new owners live in ‘floating shanties’ once the land on which these shanties are built has a title deed belonging to a Nubian who no longer owns that shanty?”

While official government figures count only 15,000 Nubians in Kenya, the country’s Nubian council of elders has contested these figures. Yusuf Diab, an elder and secretary of the council, says that in 2009 there were at least 100,000 Nubians in the country.

Dong’ says the majority of Nubians live in Kibera, with others scattered across the country in major towns.

“We are still growing in numbers. It is unfortunate that while the British settled Nubians in over 4,000 acres of land, we are now being offered 288 acres.”

Human rights activist Felix Omondi, a member of the local lobby group Bunge la Wananchi (people’s parliament) says that the stakes are high over the ownership of land in Kibera.

“It is prime land due to its proximity to Nairobi city. There are many vested interests in Kibera. Powerful investors are also interested. In September 2013, Lands Minister Charity Ngilu said that land in Kisumu Ndogo, Gatwekera, Laini Saba and Kianda has already been sold. Nobody knows who owns this land.”

Omondi says that there are more questions than answers.

“Who sold this land, is it the government or the Nubians? Also, National Environment Management Authority (NEMA) has plans to evict Kibera residents who live close to Ngong River,” said Omondi. “The Kenya-Uganda railway line cuts across the slum and with the recent December accident where a train lost control and smashed into some of the shanties, there are plans to demolish shanties close to the railway line.”

Although a 2009 census reported 170,000 people living in Kibera, the Kibera Law Centre estimates there are over one million crammed into a space smaller than New York’s Central Park.

“A majority of them are the from the Luo community and have significant influence over the politics in Nairobi county,” said Omondi. “The slum also provides ready-for-hire youths for political demonstrations and even violence was seen during the disputed 2007 presidential elections. There was a lot of violence and bloodshed in Kibera and none in the adjacent middle class homes.”

Otieno says that the situation is so volatile that if not well handled, it could lead to bloodshed.

“People here are ready to fight for what is theirs,” he said.

“During the violence, many landlords lost control over their shanties and have since been unable to collect rent from the tenants. Those who held on tightly to their property will not let go.”

But for all the recent tensions, the battle to register Kibera as Nubian land is not new.

“It began in 1938,” said Diab. “Since independence, Kibera has been contested land.”

Although in 1971 parliament passed a bill requiring the government to demarcate and issue titled deeds to Kibera’s rightful owners, the plan was never carried out.