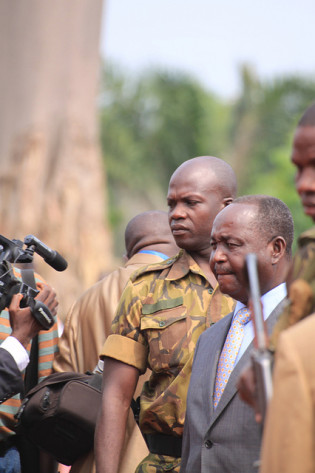 By Arsène Séverin
Authorities in the Republic of Congo are showing an encouraging new readiness to arrest and prosecute people trading in endangered species.

CONGO: Many Indigenous Women Still Give Birth in the Forest

By Arsène Séverin
Marguerite Kassa feared she would find herself alone in the small crowd of a dozen other pregnant women at the integrated health centre in Mossendjo, in the southwestern Republic of Congo. "I am six months pregnant already, but I hesitated to come here before now, because there is so much contempt for us," the thirty-year-old indigenous woman tells IPS. "Yet I was warmly welcomed."

By Arsène Séverin
Only two of the eleven countries that share the Congo Basin have validated their plans to participate in the forest conservation process known as REDD+.

By Arsène Séverin
Heads of state from the Amazon, Congo and Borneo-Mekong basins are meeting in the Congolese capital, Brazzaville: leaders hope to reach an accord on sound management of valuable rainforest ecoystems, but civil society actors believe the problems faced by local populations may be ignored.

By Arsène Séverin
It's noon at Jean-Félix Tchicaya Primary in Pointe Noire, the economic capital of Congo. Students are settling into their chairs, but not to resume their lessons. They are waiting eagerly for the hot meal that's served in the classroom each day, their plates already laid out on their desks.

By Arsène Séverin
In the hope of strengthening its agricultural production, the Republic of Congo has handed over 80,000 hectares of arable land to a company owned and operated by 14 South African farmers.

By Arsène Séverin
The Autonomous Port of Pointe-Noire has evicted 8,000 residents of a fishing village to make way for expanded facilities. The move is a blow to the community's livelihoods, as well as closing down the market that supplied the city's poor with affordable protein.

By Arsène Séverin
An emergency vaccination campaign against polio begins Nov. 12 in the Republic of Congo, where an epidemic centred on the southern city of Pointe-Noire has killed at least 100 people since the beginning of October.

By Arsène Séverin
"Today, I'm ashamed to have signed the documents creating this park, because I didn't know that we would die of hunger in the middle of the forest." Mpaka- Mbouiti is a leader in the village of Loussala, in the Conkouati-Douli National Park.

By Arsène Séverin
"I came here out of curiosity, but I ended up taking an AIDS test. I have the results," Gerard, 30 years old, told IPS. He adds, right before leaving: "The results are negative."

By Arsène Séverin
The trees are falling in Pool, and there are plenty of people to hear the sound. In a painful irony, the end of armed conflict in 2003, has signaled the wholesale devastation of forests in this southern region of the Republic of Congo.

By Arsène Séverin
"But why do they kill gorillas, why do they trap them and put them in cages? One day, if i'm president, i'll stop all those who kill gorillas, chimpanzees and bonobos," says 11-year-old Judicaëlle, a student at the Holy Sprit of Moungali School in Brazzaville.

AGRICULTURE-CONGO: All Hands On Deck to Repair Rural Roads

By Arsène Séverin
Two kilometres from the village of Ngouha II, a party of villagers are busy repairing an old bridge made of logs, and filling in a massive pothole.

By Arsène Séverin
As Omar Bongo Ondimba, the Gabonese president who died at age 73 in Barcelona on Jun. 8, is buried in Franceville in the south-west of Gabon on Thursday, his 41-year-reign as absolute ruler of this oil-producing country of 1.5 million has received mixed reviews.

By Arsène Séverin
At the Integrated Health Centre of Bissita, located in the Bacongo area of Brazzaville, the capital of the Republic of Congo, pregnant women seated on a long bench wait to have prenatal examinations.

By Arsène Séverin
As 2007 draws to a close, citizens of Congo can look back on another year in which the challenge of introducing greater accountability into the Central African country's opaque and corrupt oil sector loomed large.

By Arsène Séverin
Sixteen-year-old Bamanandoki Pitchou hasn't finished his apprenticeship in hairdressing yet, but he already has a small business. A former street child who lives in Kinsoundi - a suburb in the south of the Congolese capital, Brazzaville - Pitchou trains in the morning, and attends to clients in the afternoon.
ADVERTISEMENT ADVERTISEMENT