POINTE-NOIRE, Congo, Nov 24 2010 (IPS) - The Autonomous Port of Pointe-Noire has evicted 8,000 residents of a fishing village to make way for expanded facilities. The move is a blow to the community’s livelihoods, as well as closing down the market that supplied the city’s poor with affordable protein. 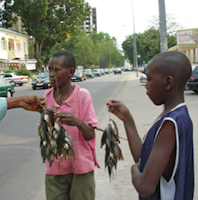 Fish is an important source of protein in Congo. Credit: Laudes Martial Mbon/IRIN

Several hundred metres of red and white markers surround what is known as Village des Popos, not far from the Nzoko military barracks. Port authorities assert they have been the owners of the land in question since 1939, but the community, dominated by migrants from Benin, does not want to leave.

“I have fished here since my youth, and I don’t know where we can go,” said Joseph Takpo, an elderly fisherman.

Seated beside a corrugated iron shack, Charlotte Makaya, a Congolese woman married to a Béninois fisherman, is perplexed. “This is our life. How will we live away from the sea?”

Adelar Sossou is arranging several parcels of fish beside his canoe. “While we wait to be definitively evicted from here, we can still fish to survive,” he said, negotiating a price with one of the few clients who have ventured out to the displaced village.

“We used to come here every day to get fresh fish for very low prices. Now there’s not so much as a sardine,” said Clémentine Milandou, a resident of Pointe-Noire.

The port is embarking on an expansion of its infrastructure with $14.5 million of funds from international donors. According to port officials, several meetings were held with residents beginning in 2008.

“This was a humane and coordinated eviction, after considerable delays,” according to a communiqué from the director general of the port, Jean-Marie Aniele.

In October, the Pointe-Noire High Court ruled the villagers had to move, threatening those who resisted with stiff fines of $110 a day.

According to the residents of Village des Popos, their community of 8,000 residents – government insists no more than 5,000 lived there – included citizens of both Congo and a large majority from the Benin Republic.

Some of the Congolese have rejoined their families living elsewhere in Pointe-Noire. But others, particularly women, are still there, on the edges of their former village, with nowhere to go in a city already struggling with a general housing crisis in the city.

“Those who only had wooden shacks, got a compensation payment of 50,000 to 58,000 francs CFA (between 110 and 125 dollars),” explained Joseph Itsalou-Mombo, the commercial director of the Autonomous Port of Pointe-Noire (PAPN). “But there are some who think they are due millions.”

The port has paid out only 504 people so far. “The others did not want to take the money. Now they have come back and we are working through an additional list,” he told IPS.

“These people have been in this area for years. They make a living from the informal sector. The compensation is insufficient for these families,” said Christian Mounzéo, president of the Coalition for Peace and Human Rights, an NGO based in Pointe-Noire.

“You also have to realise that these people sell their fish at a low price, allowing poor people in Pointe-Noire to survive,” said Mounzéo.

According to official statistics, these artisanal fishermen catch 12,000 tonnes of fish every year, against only 9,000 tonnes from the industrial fishery. And while imported frozen chicken costs an average of four dollars, an equivalent amount of six to eight fresh fish from the Village des Popos costs the equivalent of a dollar.

The loss of this fish market, so close to the city will have an impact on the diets of the poorest.

To avoid leaving the fishers completely destitute, the port has assigned them another space for their activities, at Loango, 30 kilometres down the coast. PAPN is building a warehouse there for fishing gear.

“It’s not a place to live, but rather to store outboard motors, nets and other things,” said Itsalou-Mombo.   No space has been found for the Béninois to live. “If we have proceeded with compensation, it’s so that each one can fend for themselves to find a shack in the city,” said Itsalou-Mombo. But a plot of land costs around 1,000 dollars in the peri-urban areas of Pointe-Noire, fully ten times the amount of their compensation.

Many from this fishing community are prepared to set up fishing at the new location, despite its drawbacks. “It’s now a matter of cooperatives; I don’t know if we can fish individually from that place,” says Takpo.

The balance sheet for Pointe-Noire’s port thus starts in deficit, with the destruction of thousands of livelihoods.