BRAZZAVILLE, Nov 4 2010 (IPS) - “Today, I’m ashamed to have signed the documents creating this park, because I didn’t know that we would die of hunger in the middle of the forest.” Mpaka- Mbouiti is a leader in the village of Loussala, in the Conkouati-Douli National Park. 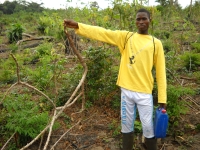 Villager in a field destroyed by elephants. Credit: Arsène Séverin

At Ngoumbi, another village within the park’s boundaries, Celestin Mavoungou said, “The animals are more important than we are. We have no rights, even when the elephants destroy our fields, our complaints to the authorities and conservationists are not taken into account.”

Congo has 3.6 million hectares of conservation zones, slightly more than 11 percent of the country’s total area. The government is determined to strengthen protection in these areas.

Conkouati-Douli covers half a million hectares in the south of the country, stretching inland from the Atlantic. It is home to a number of threatened species, including chimpanzees, gorillas and forest elephants; along the sea it hosts one of the world’s most important seat turtle hatcheries.

It is also home to roughly 3,000 people who support themselves by fishing, farming and hunting.

The park’s ecosystem is threatened by deforestation, pollution from the offshore oil industry and poaching. When a Global Environment Facility- funded conservation project there ended in 1999, anti-poaching patrols also ceased. Conservation groups saw an increase in the numbers of professional hunters shooting animals to sell their meat in Pointe-Noire, the country’s second largest city.

In November 2008, Congo enacted a law governing national parks and protected areas. The law strips forest-dwelling people of all usage rights within the core conservation zones, while defining peripiheral areas where hunting, fishing and cultivation is permitted. Hunters must have a permit, ranging in cost from $30 to $100 depending on the quarry.

But locals say the law has caused confusion and hardship.

“We don’t even know where the areas zoned for our use are; everywhere it’s the park. We even hesitate to farm,” said Mpaka-Mbouiti.

The situation is no different around parks in the north. “Not only do the rangers forbid us to hunt, they come right into the kitchen, right into our pots to fish out a piece of meat (to see if it’s bush meat),” said Clémentine, a resident of Ngombé, near the Nouabale Ndoki National Park.

Confronted over these claims, the head of the conservation and wildlife management service not only justified government’s action, he issued a warning. “It’s a group of stubborn people who defy park rangers. In the discussions we had with people before signing the agreements that created the parks, they knew very well that hunting would be forbidden there,” said Pierre Kama.

“If there are people with bad intentions who try to ignore the law, then we will punish them. Sometimes the rangers react in self-defence, the hunters being equally armed,” he said.

“It’s true, people are experiencing a restriction of their activities. But they can hunt and fish, they just have to respect the law,” said Kama.

The U.S.-based non-governmental organisation Wildlife Conservation Society, which has supported Congo’s efforts to create and manage parks for over 20 years, also rejects the complaints by locals.

“It’s a lie. No one can show us the villages where we will find this,” said Nazaire Massambe, responsible for communications for WCS Congo.

“If a park ranger goes to see, on his own, what’s in some woman’s pot, he’ll lose his job, that’s clear. All we are trying to do is to prevent is the sale of bushmeat to the cities. But not local consumption.”

But several human rights organisations lend support to locals’ claims. “We are not against conservation,” said Roch Euloge N’zobo, from the Congolese Human Rights Observatory, “but what’s taking place here, the rights of locals are completely violated.”

N’zobo says there is widespread confusion over the boundaries of the zones designated for different activities, leading villagers to plant crops only in small areas adjacent to their homes. He also reports communities facing problems protecting their fields from animals.

“Around the Conkouati-Douli Park, for example, the locals share the fields with elephants. They are forced to plant behind their houses,” said N’zobo.

One such coordinating committee has been functioning since 2009 in the northern district of Sangha, where communities are carrying out projects to resolve problems of transport in particular.

“The government is responsible, it carefully considers the use-rights of affected communities,” says Joseph Moumbouilou, in charge of research and projects at the country’s Ministry for Sustainable Development.

For WCS, the local communities are actually the first beneficiaries of conservation.

“We employ more than 300 agents, and the majority come from these communities,” says Massamba, adding that at Bomassa, near the Odzala Kokoua Park, in the north, students enjoy free education. These communities also have access to a discount store where they can buy staples at reduced cost. The management of this park, at 1.5 million hectares the most important in the country, has just been entrusted to a South African company, the African Park Network.

Elsewhere, in Ntandou Ngoma village near the Conkouati-Douli Park, the community enjoys access to clean drinking water, television stations and satellite dishes all thanks to conservation groups.

N’zobo is scornful. “It’s smoke in the eyes: the communities have truly gained nothing. Conservation has not only alienated them from their rights, it has also made them poor,” he said.

“We are in the process of drawing up maps, with the participation of locals, so that their areas of activity can be clearly defined and guaranteed.”

The tone is confrontational, but the outcome need not be. Daniel Akouele- Oba, president of the Movement of Congolese Youth for Reflection and Analysis, underlines the essential point. “The protection and conservation of biodiversity will only succeed with the participation of local communities.”

*This story is part of a series of features on biodiversity by IPS, CGIAR/Biodiversity International, IFEJ and UNEP/CBD, members of Communicators for Sustainable Development ( http://www.complusalliance.org).