BRAZZAVILLE, Nov 12 2010 (IPS) - An emergency vaccination campaign against polio begins Nov. 12 in the Republic of Congo, where an epidemic centred on the southern city of Pointe-Noire has killed at least 100 people since the beginning of October. 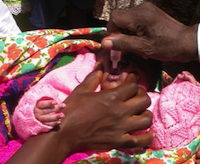 Administering oral vaccine: a risk of polio epidemics remains as long as the disease exists anywhere in the world. Credit: IRIN

According to Congolese health authorities, the epidemic has killed 97 people in Pointe-Noire, the economic capital of the country, two people in Dolisie and one in Nkayi, in the southwest.

A World Health Organization update released on Nov. 9 reported 184 cases of acute paralysis and 85 deaths, noting that the majority of cases have occurred in the population aged 15 and older. Polio usually affects children under the age of five.

“This is a very high death rate, given the number of cases. “It’s a real national catastrophe,” said Dr Jean Vivien Moumbouli, director of research at the National Laboratories based in Brazzaville.

According to the Centers for Disease Control, based in Atlanta in the U.S., where samples were sent for analysis, the epidemic is of virulent strain of the type 1 polio virus.

In Pointe-Noire, the epicentre of the epidemic, the population is désembarées. The government has said very little about the illness. “We don’t even know what’s happening, we’re just guessing,” said Jean Bakala, a resident of the Loandjili commune, which has so far reported the largest number of victims.

“My 45-year-old father contracted polio. But the doctors didn’t want to go near him, fearing that they themselves could be infected. That shocked me,” Hermane Bouity, told IPS. His father, who died several days later, was admitted at the Adolphe Cissé Hospital in Pointe-Noire.

All cases in this coastal city have been referred to the two general hospitals at Loandjili and Cissé. “We are overwhelmed. We ourselves are afraid,” confessed a nurse at Loandjili hospital.   The government has come in for criticism.

“One doesn’t know what precautions to take, because we are ignorant of this illness. The population has been abandoned,” said Brice Mackosso, secretary general of the Commission for Justice and Peace, an NGO close to the Catholic Church in Pointe-Noire.

“The government is totally responsible for the spread of this epidemic, because it has failed to communicate. On television and radio, on sees nothing, hears nothing,” said Roch Euloge N’zobo, from the Congolese Observatory for Human Rights, an NGO based in Brazzaville. “The authorities’ reaction has been hugely ineffective.”

Three weeks after the first cases emerged, government was still trying to identify the exact nature of the epidemic. It was only at the beginning of november that they began to hesitantly communicate over the threat.

“It’s a virus which attacks the nervous system, which paralyses the body and which kills,” Dr Alexis Elira Dokekias, national director general of health, told state media. “It’s necessary to observe basic hygiene. The virus is found in faeces/stool and transmitted orally. In the absence of proper hygiene, it can contaminate through water, it can be passed on through careless handling of vegetables or fruit.”

The vaccination campaign that begins on Nov. 12 will first target the residents of Pointe-Noire, then the rest of the country’s population. Twelve million doses of the vaccine will be required, according to Elira Dokekias.

“The vaccines have arrived very late. Those who are affected can no longer be saved, because it needs at least three weeks to take action, said Anatole Bikou, a medical officer in Pointe-Noire.

The United Nations Children’s Fund, UNICEF, has announced support with five million doses coming from stockpiles in Denmark. UNICEF is looking for around $3 million to acquire the remaining doses.

Dr Edouard Ndinga, the official in charge of the country’s Expanded Programme of Immunisation, declined to say how many doses Congo already had on hand.

“We have nothing. We are waiting for the international community to come to our assistance,” said N’zobo.

Figures from the EPI for 2009 showed the rate of coverage for polio in Congo was 90 percent. The last polio infection in the country was recorded in 2000. Authorities suspect the virus came from “a neighbouring country”.

According to the World Health Organization, Angola has reported 25 cases of polio IN 2010, and 28 were recorded in the Democratic Republic of congo. Among the cases found in Pointe-Noire, four people came from Cabinda, the Angolan province adjacent to Congo. “We have relaxed our epidemiological surveillance at the border,” said Elira Dokekias.

The outbreak comes in spite of recent progress in controlling polio. According to WHO, the number of cases globally this year stands at 767, around half the number at the same point in 2009. This is largely due to steep reductions in cases reported from Nigeria and India.

Containing the outbreak in Congo with a vaccination campaign that will extend to neighbouring DRC and Angola is a top priority.