BRAZZAVILLE, May 31 2011 (IPS) - Heads of state from the Amazon, Congo and Borneo-Mekong basins are meeting in the Congolese capital, Brazzaville: leaders hope to reach an accord on sound management of valuable rainforest ecoystems, but civil society actors believe the problems faced by local populations may be ignored. 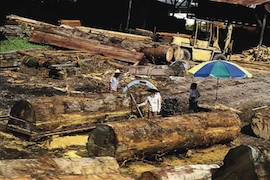 The host of the meeting, the president of the Republic of Congo, Denis Sassou Nguesso, said the summit constitutes a final “decisive step” before the United Nations Conference on Sustainable Development which will take place in Rio de Janeiro in 2012. According to organisers, the Brazzaville summit will also allow the reinforcing of South-South cooperation; the Congolese environment minister, Henri Djombo, told reporters the objective was to ask all the countries involved to form a united bloc.

Ahead of the summit, forest policy in several countries came under the spotlight. In Brazil, the government is considering a controversial revision to its Forest Code, which if passed by the Senate, will expand the amount of forest that is threatened by deforestation. The same day that the lower house of Brazil’s legislature approved the code, forest defenders José Cláudio Ribeiro da Silva and Maria do Espírito Santo, were shot to death by as-yet unknown assailants. The two had received death threats for their activism against illegal logging in the northern Amazon state of Par”.

The loosening of protections for forests in Brazil comes at the same time as satellite data revealed that forest losses in March and April 2011 were at least five times greater than during the same period last year. Nearly 600 square kilometres of forest were destroyed in these two months, the damage attributed to ranchers and soy farmers.

In Indonesia, a moratorium on the issuing of new permits to clear forests belatedly went into force on May 19, freezing proposed logging or conversion of some 64 million hectares of peatland and primary forest according to a report in the Jakarta Globe. But the measure – which included exemptions for permits already agreed in principle, extensions to existing permits, and for projects linked to production of sugar, rice or energy – has been criticised by activists.

“This is a bitter disappointment,” Paul Winn of Greenpeace Australia-Pacific told the paper. “It will do little to protect Indonesia’s forests and peatlands. Seventy-five percent of the forests purportedly protected by this moratorium are already protected under existing Indonesian law, and the numerous exemptions further erode any environmental benefits.”

Greenpeace elsewhere raised concerns that timber certified as sustainably harvested by the Forest Stewardship Council in the Democratic Republic of Congo and elsewhere did not meet the required standards. A May 27 press release specifically cited two companies operating in the DRC, Société de Développement Forestier and Congolaise Industrielle des Bois, for damaging valuable areas intended to be left undisturbed and for violating human rights in the provinces of Bandundu and Equateur.

Reached by phone, the minister for communication for the provincial government of Equateur Province, Rebecca Ebale-Nguma, said she had appealed to the government in Kinshasa to take advantage of the Brazzaville summit to take note of the problems of the population in this forested region.

“In Lisala, in Mbandaka and at Basankusu (in the north of DRC) for example, the population see tremendous wealth leave the province in the form of timber, but live in extreme poverty,” said Ebale-Nguma.

“Entire cities here – in Equateur – are without clinics or schools.”

The Republic of Congo’s environment minister said the ten countries of the Congo Basin have between them drawn up a plan for convergence over the management of their forest ecosystems. “There can be some differences, but these will not compromise the overall plan,” said Djombo.

But numerous civil society groups in the Congo Basin and beyond believe the summit will fail to take into account the problems facing forest communities and indigenous peoples.

“The participation and consultation of the people affected does not seem to be taken seriously,” said Indra van Gisbergen, a member of the Forest European Resources Network. “There must be real access to information and awareness campaigns for these people.”

For van Gisbergen, the Brazzaville summit will be more about the commercialisation of carbon than the good of the people. “It is clear from reading the draft declaration and cooperation agreement, that the emphasis is on promoting the carbon market and financing emission reductions via the market,” she told IPS.

In a position paper published ahead of the summit, the Congo Basin Network, based in Cameroon, expressed its indignation over the direction indicated in draft documents.

“Given that the outcome of this summit will be very influential, our organisations are calling on heads of state to not give priority to carbon trading with regards to the REDD (Reducing Emission from Deforestation and Forest Degradation) process,” Roch Euloge N’zobo, one of the spokespersons for the network, told IPS.

Maixent Fortuné Hanimbat, another member of the Congo Basin Network, said the draft documents do not clearly define a role for civil society in following up the recommendations of the summit.

Representatives of indigenous pygmy communities are also complaining. “Our association of indigenous people does not even know how to register. Once again, we will be present, but not to give our point of view,” said Jean Nganga, president of the Association for the Defence and Promotion of Indigenous Peoples, based in Brazzaville.

“Perhaps we will be the most significant absentees from this event.”

* Terna Gyuse in Cape Town contributed to this report.