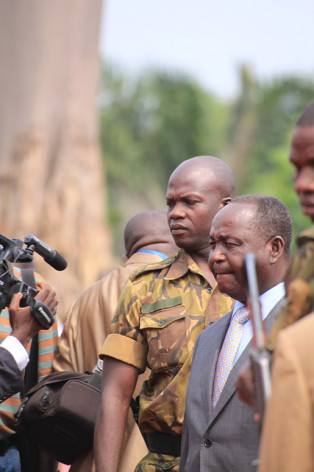 Central African Republic President François Bozizé (in suit) was ousted by a rebel coup on Mar. 24. Credit: Kayikwamba/CC by 2.0

BRAZZAVILLE, Mar 27 2013 (IPS) - Despite assurances by the leader of the Séléka rebel alliance, self-proclaimed president of the Central African Republic Michel Djotodia, that a “red brigade” would be established to stop the looting and violence that has ensued since Sunday’s coup, citizens do not feel security has been restored.

“We are not safe, even though the rebels have imposed a curfew in Bangui. There is shooting everywhere, which scares us and the children,” Bibi Menbgi, a mother living in the capital Bangui, where electricity and water cuts have persisted since Sunday Mar. 24, told IPS.

“There are fewer armed youths firing in the air and looting, but tensions are still high. (Former President François) Bozizé had been distributing arms to groups of young men,” John Mourassen, a Bangui-based journalist, told IPS.

Djotodia suspended the country’s constitution, government and parliament on Sunday. The African Union condemned the coup d’état and suspended CAR from the regional organisation, issuing a travel ban and an asset freeze against the seven Séléka leaders, including Djotodia. The United Nations Security Council also condemned the suspension of CAR institutions and called for the reinstatement of constitutional rule.

In his first official statement, on Mar. 25 in the CAR capital Bangui, Djotodia indicated that he would implement the Libreville Agreement, a peace accord signed in January between Séléka and Bozizé’s government.

Séléka, a coalition of rebel groups, had launched an offensive against Bozizé’s rule last December.

Djotodia undertook to retain Nicolas Tiangaye, the prime minister of the government of national unity, to set up a new cabinet. The new president also said that he would organise elections within the next three years.

Contrary to Djodotia’s assurances, the Libreville Agreement provided for parliamentary elections in 2014, and a presidential election in 2016 at the end of Bozizé’s second term. The agreement also stipulates that the current leaders of the transition — the president and the ministers — would not stand for election. There are questions as to whether the rebels will respect this clause.

According to Jean Kinga, a lawyer in Brazzaville, the self-proclaimed CAR president is likely to resort to extrajudicial action. “He has suspended all the legislative and judicial institutions, so he has the freedom to do as he likes. There might be reprisals against members of the old regime,” he told IPS.

To gain people’s confidence Djotodia needs to bring all parties together, “particularly the Bozizé camp and the political opposition,” said Mourassen.

Over the weekend, the situation in Bangui escalated after Séléka rebels decided to seize the capital as the Central African Multinational Force, known by its French acronym FOMAC, stood by.

The Central African Multinational Force, which is under the command of Congolese General Guy Pierre Garcia, did not engage in any fighting during the capture of Bangui. Indeed, FOMAC forces are said to have been shot at by the CAR army, which is loyal to Bozizé, who fled Bangui on Mar. 24 for Cameroon. It is reported that his family members took refuge in the Democratic Republic of Congo.

Since May 2012, relations between Bozizé and the sitting chair of the Economic Community of Central African States, Chadian President Idriss Deby, cooled after Bozizé rejected his advice to engage in dialogue with his opponents. The 500 Chadian soldiers who made up Bozizé’s closest forces left CAR in October 2012 after he accused them of committing atrocities.

Bozizé was left high and dry by other heads of state in the Central African region in retaliation for ignoring their advice and seeking military protection from South Africa instead.

Djotodia accused Bozizé of becoming increasingly authoritarian, and of reneging on the Libreville Agreements sponsored by the President of Congo-Brazzaville Denis Sassou Nguesso, the mediator in the CAR crisis.

At the time of writing, the government of Congo-Brazzaville had not made any comment on the coup d’état. However, sources close to the presidency in Brazzaville declared that Bozizé “had violated the Libreville Agreements and consequently lost the trust of President Sassou Nguesso. He no longer deserved support.”

Jonas Mokpendiali, a Central African resident in Bangui since 2003, said that he is concerned about the future of his country. “Nothing seems to change. (Jean-Bédel) Bokassa was ousted, Andre Koligba was ousted, (Ange-Félix) Patassé was ousted and now it’s the turn of Bozizé, who thought he was the master of Bangui with his brutal dictatorship,” he told IPS.

Gabriel Mialoundama, a sociologist at the University of Brazzaville, considers the events in Bangui to be the latest in a long-standing crisis. “From the time he came to power, Francois Bozizé has failed to unite the people. His approach was to exclude his opponents, particularly President Ange-Félix Patassé who died (in 2011) because of his ineptitude. He wasn’t a strong leader,” he told IPS.

“If Djotodia works hard to bring in a new constitution and put the CAR’s house in order by organising elections where he is not a candidate, he will have done the CAR a great service,” Mialoundama added with optimism.

But the academic doubts that the new leader will have a free hand.

“CAR is in the grip of Congo (Brazzaville) and Chad, who are believed to have supported rebels with the blessing of Sassou Nguesso. As they did with Bozizé, Deby and Sassou will maintain their hold on Bangui; Djotodia will be their puppet,” he said.