JOHANNESBURG, Nov 9 2011 (IPS) - They should be wary of each other. The historical conflict between their ethnicities has resulted in Africa’s largest genocide. 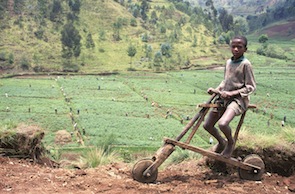 Refugees say Rwanda's problems do not stem from economics, access to land – but rather a lack of peace. Credit: Wendy Stone/IRIN

But Claude Kayitare sits on the verandah of a popular Johannesburg restaurant, chatting to his friend, Theogene Nshimyimana. It seems an easy friendship, a sight that does not raise eyebrows in South Africa, but it took years for mutual distrust and suspicion to move towards friendship.

This is because Kayitare is Tutsi and Nshimyimana is Hutu. In 1994 an estimated 800,000 Tutsis and moderate Hutus were killed by Hutus in just 100 days. Both men have since fled Rwanda and become refugees living in exile in South Africa, enjoying the freedom of expression and association that South Africans take for granted.

Since this meeting, Geneva has indicated it will move to recommend implementation of the cessation clause for Rwandan refugees by December 2011.

Designed to be narrowly interpreted, cessation requires a fundamental and profound change in the country conditions that provoked the need for asylum. Based on the Geneva convention, the premise is that political, social and other changes in country conditions enable its citizens to seek the protection of their own governments once again.

This renders refugee status – protection stemming from a host government – obsolete. It also requires that the change is demonstrably enduring.

The UNHCR can recommend cessation, yet it is up to individual states to agree and enforce the cessation clause. Exceptions to the clause are yet to be finalised, and some such exceptions include those who are in Hutu-Tutsi life partnerships or marriages.

But Nshimyimana has no faith in such exceptions. “On paper, there may be exceptions. But in practice, the implementation is this: the cessation clause allows countries to remove foreigners. We will be forced to go home.”

Many non-governmental organisations, civil society organisations and Rwandan refugees themselves have raised numerous questions about Rwanda’s applicability under these conditions.

Since it was announced in 2009 that the UNHCR was considering recommending cessation, Rwanda has been under increased scrutiny by human rights institutions. The information coming out of the country is not encouraging.

Kayitare left Rwanda in 2003, as a direct result of his involvement with the Rwandan army. “I am from the Rwanda Patriotic Army. As a soldier, I worked for the Department of Military Intelligence (DMI).”

He goes on to disclose that the government uses the military to eliminate opposition in the form of political opponents, media critics and even civilians who did not toe the line.

“(Rwandan President) Paul Kagame achieved 95 percent of the votes in the 2010 presidential election. Is such a majority likely in any election? Imagine you are going to vote. You stand in your booth with a soldier and his gun. Now imagine your fear if you think the soldier has seen you have not put your cross by Kagame. You might imagine the soldier would check your ballot after you left. You would fear getting home safely that night,” Kayitare says.

Kayitare and Nshimyimana are able to cite many examples of how Kagame’s authoritarian governing style has created a military state that uses fear and intimidation to control the population. Kayitare explains that the DMI has extensive networks of civilian informants that the government can use to monitor its population.

Nshimyimana was a personal victim of this process. After fleeing Rwanda for the second time in 1994, he was forced to return home due to the spread of disease and cholera in the Democratic Republic of Congo refugee camp he was living in.

“I arrived home safely, but my family felt they would be forced to declare me, a refugee returning home, to the administration if I stayed. The government keeps tabs on all of those who speak out against it – my father feared being killed if I was discovered in our home,” Nshimyimana says.

Kayitare shakes his head angrily and corroborates this. “It is a cut-throat environment. It is kill or be killed. I have been sent to clear the bones of people who have been killed.”

These are not merely the reports of scared and traumatised men. Amnesty International, Human Rights Watch and church groups have submitted recent reports that detail incidences of political disappearances, arbitrary arrests and prevention of opposition politicians to register their political parties.

These facts are a strong contrast with the international image Kagame has developed of himself and his country. The organisation Kayitare represents, the Rwandan Platform for Dialogue, Truth and Justice, states that Kagame has focused on improving his international image and building a veneer to present to the West – an image of a well-functioning state.

Kayitare and Nshimyimana are both quick to point out that when high-level visitors arrive in Rwanda, they are well managed. “You can never be left alone to see whatever you (want to). You are guided,” explains Kayitare.

Which leads to what Kayitare and Nshimyimana fear as Kagame’s biggest public relations exercise – the return of Rwandans who still remain refugees in countries like South Africa, Zambia and Tanzania.

“Refugees are a blot on his public image. He wants us to come home to resolve this damaging situation where refugees speak out against his politics. He builds a good image overseas and then calls us dogs, flies and frogs to his parliament at home,” says Kayitare.

Indeed, Paul Kagame has been recorded as stating that Rwandan refugees are akin to human waste that must be excreted.

His opinion about the cessation clause is summed up as he explains his emotions. “Do you think I need to consult with someone else about going home? If I could go home, I would not even be here talking to you. I would be long gone,” Nshimyimana adds.

It is clear that years of suspicion, fed and watered at the very grassroots of Rwanda’s society, in the way neighbours and families are intimidated by fear and distrust, have not been effectively dealt with.

Kayitare states that Rwanda’s problems do not stem from economics, access to land – but rather a lack of peace.

“Instilling fear in citizens runs so deep that Kagame will continue in power. That is what dictatorship is – people so scared they cannot imagine anything different,” Kayitare says.