UNITED NATIONS, Jun 14 2012 (IPS) - “When I was still at school I was abducted by the Lord’s Resistance Army, along with 139 other girls,” says Grace Akallo. “I spent seven months in captivity, but I survived, I escaped and I went back home.”

Twelve years ago, when Akallo was still a child, her life took an unexpected turn when she fell into the hands of Joseph Kony’s notoriously brutal rebel force known as the Lord’s Resistance Army (LRA). 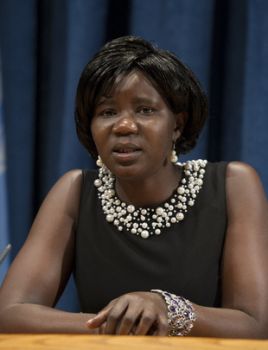 Today, she is married with a child, a masters degree and a mission in life: to give a voice to the female child soldier.

Formed in Uganda in the 1980s, and now operating in the Democratic Republic of Congo, the LRA remains among the most persistent perpetrators of grave violations against children, according to a recent U.N report.

“When girls are first abducted, it is the same as for boy soldiers,” Akallo told IPS. “They are beaten and mistreated, they are trained to become child soldiers, given AK-47s, and forced to kill.

“Most of the children are sent to the forefront, with the leaders behind them. Your bullets are finished? You shoot your friend in order to get more bullets. At the same time the leaders used children as shields, so that the children get shot and they survive.”

What makes a girl child soldier different is the sexual abuse that they are forced to endure, says Akallo. “Most girls were sexually abused, including me. I was lucky I did not return home with a child, or get infected with HIV or any other disease.

“Many of these girls had to give birth while in captivity, some of them had to go fighting with children on their backs, and some gave birth on the battlefield,” she said.

But the plight of the female child soldier is largely hidden from view, masked by the leaders of armed groups who refer to girl combatants as “wives” or “sisters”.

Girls are summarily awarded to male combatants, and Kony is reported to have had up to 50 girls in his immediate household at one time.

Due to the roles that girls play, including cooking, domestic tasks, transporting provisions and sexual services, they are rendered almost invisible, under the radar of international law and disarmament initiatives.

Disarmament, Demobilisation and Reintegration (DDR) programmes have been in operation since the 1980s and the U.N launched its formal set of guidelines in 2006. But progress has been patchy, especially regarding girl soldiers.

“When you disarm somebody, you ask them to return their arms. Many of the female child soldiers do not carry arms. They are used as sex slaves and bush wives. From that point of view, I do not think that DDR has been successful,” Ugoji Adanma, founder of the Eng Aja Eze Foundation, which helps women and girls emerging from conflict, told IPS.

International law has also “dramatically excluded” female soldiers, according to Matthew Brotmann, director of international programmes and adjunct professor of law at Pace Law School, speaking at a Jun. 4 conference titled “The Incidence of the Female Child Soldier and the International Criminal Court”.

By failing to include specific gender-related definitions in legal instruments and policy guidelines, “We are forcing a square peg into a round hole,” Brottman told IPS.

“We cannot treat all victims the same regardless of gender,” he said.

In the recent trial of Congolese warlord Thomas Lubanga Dyilo, the enlistment of children as soldiers was enshrined as a war crime for the first time.

But commanders of Lubanga’s militia group, the Union of Congolese Patriots (UPC), were not held to account for allegations of rape, which raises fundamental questions about the bias of international law.

“The incidence of the female child soldier was not really taken into consideration. It was noted, but why did the prosecutors not tender the evidence of core witnesses as to the sexual violence against females? That is my concern,” Adanma told IPS.

The reintegration of female child soldiers poses one of the greatest challenges for ex-combatants and those endeavouring to protect them, from grassroots NGOs to governments and the international community.

Funding is lacking, and though donors are quick to respond in emergencies, reintegration often falls into the murky area between emergency assistance and development assistance.

“In Sierra Leone, where we worked on rehabilitation hospitals and education, to open up schools where girls could go, my message was carry the pen and not the gun,” Rima Salah, former deputy executive director of the U.N. children’s agency UNICEF, told IPS.

But the complexity of reintegrating ex-combatants defies simple solutions.

“With boys, people can forget that they used to be soldiers, but the girl soldier walks with a child, which makes her past unforgettable. The stigma stays with her,” Akallo explained.

“Personally, I struggled a lot. I was called names – ‘Kony’s wife’, ‘Kony’s prostitute’ – even the girls that I worked with would call me names.

“Social workers, and people working with girl child soldiers have to be really very strong to be able to walk with these girls in the community.”

Akallo recently founded an NGO based in northern Uganda called United Africans For Women and Children Rights that emphasises the importance of ensuring former child soldiers are accepted back into their communities.

“What we do is mostly focused on the reintegration and rehabilitation of children,” Akallo told IPS.

The NGO is currently in the process of building a community health centre and a counselling centre, which will focus on reconciling the community.

“It is very important that girl child soldiers are reintegrated into the community otherwise they are left to fend for themselves,” she said.

Looked upon as soiled, stigmatised as HIV carriers, and ostracised as mothers to children born of war, without support female ex-combatants have few doors open to them in society.

“Many female ex-combatants turn to prostitution,” she said. “They may no longer be child soldiers but they are forced to trade in their freedom once more.”