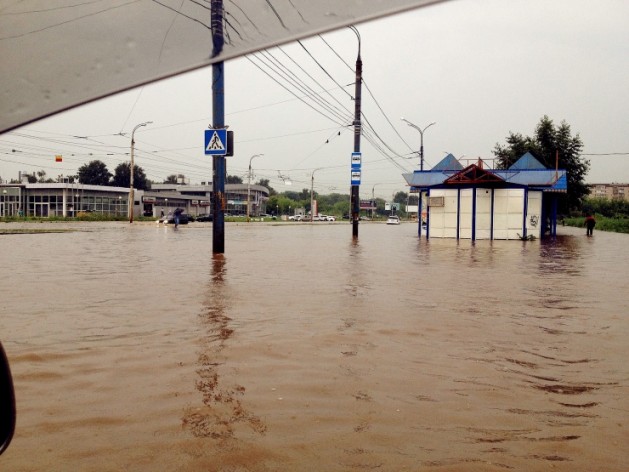 MOSCOW, Aug 30 2014 (IPS) - The recent call from Russian Prime Minister Dmitry Medvedev for “tightening belts” has convinced even optimists that something is deeply wrong with the Russian economy.

No doubt the planned tax increases (introduction of a sales tax and increases in VAT and income tax) will inflict severe damage on most businesses and their employees, if last year’s example of what happened when taxes were raised for individual entrepreneurs is anything to go by – 650,000 of them were forced to close their businesses.

Nevertheless, it looks like some lucky people are not only going to escape the “belt-tightening” but are also about to receive some dream tax vacations and the lucky few are not farmers, nor are they in technological, educational, scientific or professional fields – it is the Russian and international oil giants involved in oil and gas projects in the Arctic and in Eastern Siberia that stand to gain.

“In October [2013], Vladimir Putin signed a bill under which oil extraction at sea deposits will be exempt from severance tax. Moreover, VAT will not need to be paid for the sales, transportation and utilisation of the oil extracted from the sea shelf,” noted Russian newspaper Rossiiskie Nedra.

“It looks like some lucky people are not only going to escape the ‘belt-tightening’ but are also about to receive some dream tax vacations and the lucky few are not farmers, nor are they in technological, educational, scientific or professional fields – it is the Russian and international oil giants involved in oil and gas projects in the Arctic and in Eastern Siberia that stand to gain”

Some continental oil projects were alsoblessedby the “Tsar’s generosity”: “For four Russian deposits with hard-to-recover oils [shale oil, etc.] – Bazhenovskaya [in Western Siberia] and Abalakskaya in Eastern Siberia, Khadumskaya in the Caucasus, and Domanikovaya in the Ural region – severance taxes do not need to be paid. Other deposits had their severance tax rates reduced by 20-80%.”

In fact, the line of thinking adopted by Russian officials responsible for tax policy is very simple. Faced with the predicament of an economy dependent on oil and gas (half of the state budget comes from oil and gas revenue, while two-thirds of exports come from the fossil fuel industry), they decided to act as usual – by stimulating more drilling and charging the rest of the economy with the additional tax burden.

There have been many warnings from well-known economists about the “resource curse” [the paradox that countries and regions with an abundance of natural resources tend to have less economic growth and worse development outcomes than countries with fewer natural resources] – and its potential consequences for the countries affected: from having weak industries and agriculture to being prone to dictatorships and corruption.

For a long time, however, economists have been keen on separating the economic and social impacts of fossil fuel dependency from the environmental and climate-related problems. But now, these problems are closely interconnected, and Russia might be the first to feel the strength of their combination in the near future.

Medvedev may not have read much about the “resource curse” but he should at least be familiar with the official position of the UN Framework Convention on Climate Change (UNFCC), whose Executive Secretary Christiana Figueres has said that three-quarters of known fossil fuel reserves need to stay in the ground in order to avoid the worst possible climate scenario.

One should at least expect this amount of knowledge from Russia as a member of the UN Security Council and it will be interesting to note whether the Russian delegation attending the UN Climate Summit in New York on September 23 will be ready to explain why, instead of limiting fossil fuel extraction, the whole country’s economic and tax policy is now aimed at encouraging as much drilling as possible.

However, it is not just the United Nations that has been warning against the burning of fossil fuels due to the related high climate risks. In 2005, Russia’s own meteorology service Roshydromet issued its prognosis of climate change and the consequences for Russia, stating that the rate of climate change in Russia is two times faster than the world’s average.

Roshydromet predicted a rapid increase in both the frequency and strength of extreme climate events – including floods, hurricanes, droughts, and wildfires. The number of such events has almost doubled during the last 15 years, and represent not only an economic threat but also a real threat to humans’ lives and their well-being,

Consider this summary of climate disasters in Russia during an ordinary July week (not including any of the large natural disasters such as the floods in Altai, Khabarovsk, and Krymsk, or the forest fires around Moscow in 2010):

“Following the weather incidents in the Sverdlovsk and Chelyabinsk District where snow fell last weekend, a natural anomaly occurred in Novosibirsk, resulting in human casualties … Two three-year-old twin sisters died after a tree fell on them during a strong wind storm in the town of Berdsk, Novosibirsk District.”

“The flood in Yakutia lasted a week and resulted in the submersion of Ozhulun village in Churapchinsky district last Saturday. Due to the rise of the Tatta River, 57 house went under.” 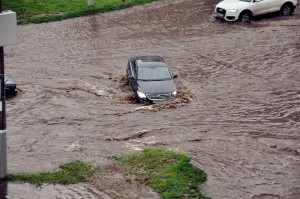 Cars swept away in July 2014 floods in Russia. Credit: takeme.ru

Is it not worrisome that so many climate disasters have to occur before Russian officials start to realise that climatologists are not lying? Or perhaps they are simply not inclined to take the climatologists’ warnings seriously.

Another significant problem could arise for Russia if oil consumers start taking U.N. climate warnings seriously – and there is evidence that this is happening.

The European Union (still the main consumer of Russian oil and gas) has announced an ambitious “20/20/20 programme” – increasing shares from renewables to 20 percent, improving energy efficiency by 20 percent, and decreasing carbon emissions by 20 percent. The United States has decided to decrease carbon emissions from power plants by 30 percent. These are only first steps – but even these steps can help decrease fossil fuel consumption.

Fossil fuel use has only very slowly been increasing in the United States and decreasing in Europe in the last five years. On the other hand, demand for oil has continued to rise in China and Southeast Asia, and it is perhaps this – rather than the recent “sanctions” against Russia over Ukraine – that inspired President Vladimir Putin’s recent “turn to the East”.

But there are serious doubts that Asia’s greed for oil will continue into the future. China recently admitted that it will soon be taking measures to limit carbon emissions – for the first time in its history. China has already turned to green energy andled the rest of the worldin renewable energy investment in 2013.

Will other Asian countries follow suit? Perhaps – because they certainly have a very strong incentive. According to Erin McCarthy writing in the Wall Street Journal, South and Southeast Asia’s losses due to global warming may be huge, and its GDP may be reduced by 6 percent by 2060, despite the measures taken to curb its emissions.

What does this mean for Russia?

Well, if the oil-consuming countries meet their carbon emission targets, we can expect a 10-20 percent decrease in oil demand in the next ten years, maybe more. Any decrease in demand usually induces a decrease in price – but not always proportionally. Sometimes, especially if the market is overheated, even a small decrease in demand can trigger a drastic falls in price. Economists call such a situation a “bursting bubble”.

Today, the situation in the oil (and, in general, fossil fuel) market is often called a “carbon bubble”. Because of high oil prices, investors are motivated to make investments in oil drilling in the hopes of earning a stable and long-term income.

But once the world starts taking climate issues seriously and realises that most of the oil needs to be left in the ground, oil assets will fall in value. Investors will try to withdraw their money from the fossil fuel sector, and, facing a crisis, oil companies will be forced to decrease both production and prices.

If the “carbon bubble” bursts, Russia will be left with sustainable businesses (that are being choked by the nation’s own tax politics) and with a perfect network of shelf platforms, oil rigs, and pipelines (which will be completely unprofitable and useless). Thus, by making fossil fuels the core of its economy, Russia is taking twice the number of risks.

First, it risks ruining the climate, and second, it risks ruining its own economy. It looks like Russia will lose at any rate: if the leading energy consumers are unable to decrease their oil consumption, the climate will be ruined everywhere, including Russia. If they manage to decrease their dependence on fossil fuel, the Russian economy will be ruined.

This certainly is not looking pleasant, especially if we add in the high probability of a major disaster like the Gulf of Mexico Oil spill happening in the Arctic, as well as countless minor leaks possibly occurring along the Russian pipelines.

But maybe Russia just has no other alternative to an economy dependent on fossil fuels?

In that case, perhaps it is worth mentioning a recent article by Russian financier Andrei Movchan in the Russian Forbes magazine. Movchan convincingly shows that the Achilles’ heel of the modern Russian economy is its extremely underdeveloped small and medium-sized businesses. And it looks like the current tax plans would literally exterminate them.

If Russia were able to reverse this tax policy and make small businesses play as big of a role in the economy as they do in the United States or Europe, there could be economic growth comparable to the growth expected from oil and gas – without all the frightful side effects of an economy driven by fossil fuels.

Sounds like a dream, but the first step to making it a reality can be simple: get rid of big oil lobbying in the government and try to reform the taxation system to suit the interests of Russian citizens instead of the interests of the big oil corporations.