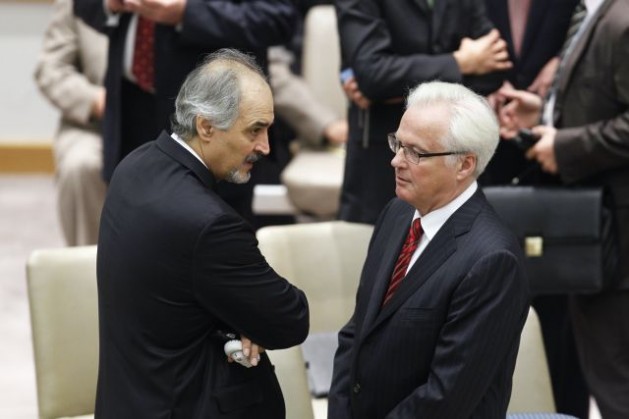 UNITED NATIONS, Jul 19 2012 (IPS) - Syria became the first country in the history of the United Nations to be “protected” for an unprecedented third time by double vetoes cast by Russia and China in the Security Council.

Jose Luis Diaz, head of the U.N. Office of Amnesty International, told IPS that in recent history, Myanmar (Burma) and Zimbabwe have benefited from double vetoes, but on one occasion each.

As a result of the three double vetoes over a 17-month period, the United Nations will remain politically paralysed – even as a growing civil war, which has already claimed the lives of over 10,000 civilians, continues to spin out of control.

“I think the repeated double vetoes by Russia and China on Syria, other than feeding the perception of a Security Council outliving its usefulness, will justifiably draw attention to the need to curb or limit that power when crimes against humanity, war crimes and massive human rights violations and abuses are being committed, as some countries have proposed,” Diaz said.

The vetoes were cast against three Western-inspired resolutions threatening to penalise the government of President Bashar al-Assad since the outbreak of an ongoing uprising 17 months ago.

On Thursday, the third of the resolutions, this time the brain child of Britain, garnered 11 out of 15 votes, with two abstentions (Pakistan and South Africa).

But it failed to be adopted because of the vetoes by Russia and China, two of the five permanent members of the Security Council besides the United States, Britain and France.

But if the Syrian government fails to stop using its heavy weapons on civilians, the resolution left open the possibility of diplomatic, economic and military sanctions against Syria under Chapter VII of the U.N. charter.

Asked what comes next, U.S. Ambassador to the United Nations Susan Rice told reporters, “Sadly the message from the two permanent members (Russia and China) is that they are willing to support Assad to the bitter end.”

In a statement released Thursday, U.S. Senator John Kerry, chair of the Foreign Relations Committee, said that Russia and China’s veto of the Syria resolution is as surreal as it is dangerous.

“As Rome burns, they’re worried about saving Nero,” he said, adding that Assad and his supporters need to hear unequivocally from the international community that they are losing.

Phyllis Bennis, director of the New Internationalism Project at the Washington-based Institute for Policy Studies, told IPS that all the outside powers are focused far more on their own self-defined national interests than they are concerned about the people of Syria.

She said that Russia’s veto is based partly on the need to continue its longstanding commercial and military alliance with the Assad regime, but more urgently and immediately on a commitment to maintain its sole military presence on the Mediterranean – its naval base at Tartus, on the southern Syrian coast.

China’s veto, she said, is almost certainly framed by its longstanding resistance to any Council approval of military intervention anywhere, out of concern it could be a precedent.

For the U.S. and its European allies, the concern is primarily to maintain control or at least significant influence over any potential post-Assad regime.

“That explains the official CIA (Central Intelligence Agency) focus on aiding its Saudi, Qatari and Turkish allies by helping decide who among the opposition forces should actually get the arms being shipped in,” she said.

Israel has not been a major force demanding regime change in Damascus, for the simple reason that both Assad regimes (Bashar and his father Hafez) have been more or less reliable neighbors – keeping the Israeli-occupied Golan Heights and the Syria-Israel border largely quiet, and helping the U.S. when it comes to interrogating/torturing suspects in the global war on terror, sending warplanes to join the U.S. coalition against Iraq in 1991, etc., said Bennis.

Amnesty International’s Dias told IPS that in the case of Syria, it’s not so much the Security Council “outliving its usefulness”, but of not having been very useful, period.

For better or worse – and in this case, for worse – the Council can only be useful when the interests of its permanent members are aligned or at least don’t contradict each other, he said.

“When those interests don’t align, as in this case, they use their veto,” he added. “This is obviously not the way it should be.”

Dias also said the Council is an anachronism, but it is not going away anytime soon.

Pending reform, however, its members, especially the permanent ones, should really exercise the utmost restraint in using the power they accorded themselves decades ago and which they use ostensibly in the name of the whole international community, Dias said.

“If they’re perceived as acting based on narrow or national interests, then the Council will rightly be judged irrelevant, or worse.”

And there are risks to that, not least that it could encourage states to bypass the Council and act outside the international legal framework, he added.

Meanwhile, the mandate of the U.N. Supervision Mission in Syria (UNSMIS), led by General Robert Mood, and which has been monitoring the situation in Syria, expires Friday.

Bennis told IPS that extending the U.N. observer team mandate is vital, particularly as the military battle inside Syria escalates. With increasing threats to Syrian civilians, any potential for negotiations must be taken seriously.

Gen. Mood’s assessment that the bottom-up negotiations beginning in places like Deir Ezzor and then expanding to a national phenomenon as a way to lessen the violence could be a crucial last-ditch effort to achieve a diplomatic, rather than military resolution of this crisis.

“It is not surprising that Russia rejected the U.S.-led resolution to extend the mandate given Washington’s insistence on the resolution being taken under the terms of Chapter VII – U.S. claims that its goal is ‘only’ increased sanctions ignores the reality that Chapter VII is also the necessary precursor to military force – and the Libya model looms large in which an officially narrow Council resolution under Chapter VII was quickly transformed into an all-out U.S.-NATO war against Libya,” said Bennis.

By insisting on the link between extending the observer mandate and Chapter VII, the U.S. is essentially holding the Council hostage to its own intentions of escalation, she added.