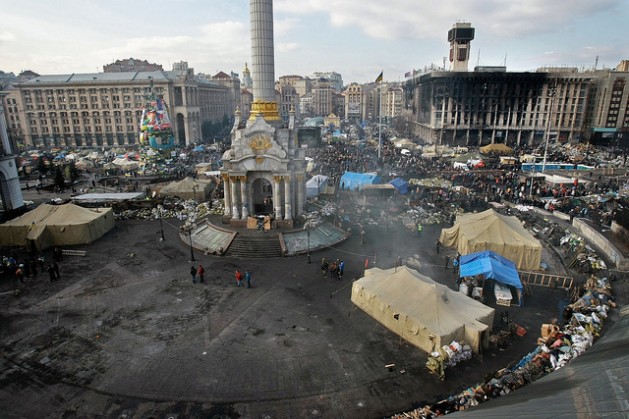 Independence Square in Kiev. In the aftermath of the revolution Ukraine now faces a difficult path to EU integration. Credit: Natalia Kravchuk/IPS.

NEW YORK, Sep 4 2014 (IPS) - The crisis in Ukraine is a man-made disaster created by world leaders who have been trying to pull Ukraine apart – either towards Europe or Russia.

As geo-political tensions in the world rage unabated, world powers rush to impose sanctions that cause unintended consequences.

A Washington Post editorial, ‘The Snake Oil Diplomacy: When Tensions Rise, The US Peddles Sanctions’, published as far back as July 1998, stated, “No country in the world has employed sanctions as often as the United States has… it has imposed economic sanctions more than 110 times.”

Historically, the League of Nations, United Nations, United States and the European Union have resorted to mandatory sanctions as an enforcement tool when peace has been threatened and diplomatic efforts have failed.

“No country in the world has employed sanctions as often as the United States has… it has imposed economic sanctions more than 110 times.” -- Washington Post
During the 1990s, we witnessed a proliferation of sanctions imposed by the U.N. and U.S. against Cuba, Iran, Iraq, Libya, Liberia, Somalia, Cambodia, Haiti – to name a few.

These sanctions brought disastrous consequences – where those in power thrived and the poor suffered.

A few countries such as Iran, Iraq and North Korea scoffed at U.S. sanctions as they had resources or the will power to survive. Sanctions against China and India failed to change the leadership or hinder the country’s economic drive and growth.

But in most countries, especially Cuba, Iraq and Haiti, sanctions deteriorated their economic, social and healthcare systems.

At times, sanctions were used as an ulterior motive for “regime change” which is a violation of the U.N. Charter and the basic norms of international law.

Such a devious practice has nothing to do with protecting human rights, and promoting democracy and freedom.

Now, the sanctions against Russia – over the crisis in Ukraine – have boomeranged.

The U.S. and the EU imposed sanctions on Russia when Crimea joined Russia after the Crimeans held a referendum to declare independence based on the right of nations to self-determination that is stipulated in Article 1 of the U.N. Charter.

The right to “self-determination” was applied when former Yugoslavia and Czechoslovakia were divided, and when several small states like East Timor declared independence.

People in East Ukraine – 70 percent of who are ethnic Russians – felt violated when the Ukrainian Government decided to ban the Russian language from its official status.

They too invoked their right to self-determination and held a referendum to establish their own State.

The U.S. broadened sanctions when the Malaysian plane was downed in East Ukraine. No evidence surfaced from the black boxes, satellite images or OSCE inspectors’ revelations to prove culpability – unless it was a deliberate, pre-meditated act to blame a warring faction.

Also Western leaders claim that Russia provides weapons to the rebels in Ukraine. It may be true, but again the U.S. has not provided any evidence and Putin denies the charge. It’s like Iraq’s WMDs all over again.

More U.S. and EU sanctions against Russia froze the assets of Russians in power, banned their travel to EU countries, restricted Russian banks’ sales of debt or stocks in European markets, and targeted Russia’s defense, energy and financial sectors – to name a few.

Russia’s agriculture minister, Nikolai Fyodorov, said, “We now have the unique chance to improve our agricultural sector and make it more competitive.” He said that Russia has already identified other non-Western countries to import banned food items, and that he is confident that Russians will use locally available food.

From what we hear, European growth has slowed down; some countries creeping back into recession; U.S. investors have withdrawn over four billion dollars from Euro stocks; European farmers and Norway’s fishermen are affected and the EU has set aside 167 million dollars to compensate farmers for their loss of revenue; and companies that transport cargo to Russia have come to a halt.

While it is difficult to predict how this tit-for-tat will ultimately affect both Russian and Western economies, Hungarian Prime Minister Viktor Orban said that the sanctions have, in fact, harmed the West more than they have hurt Russia. He said, “In politics, this is called shooting oneself in the foot.”

Also the toll on human suffering is increasing. The U.N. claims that the war in Ukraine has already killed over 2,500 and injured nearly 5,000 people.

According to UNHCR, over 730,000 Eastern Ukrainians have fled to Russia. The Ukrainian government acknowledges that over 300,000 of its citizens are displaced inside Ukraine.

The U.N. Charter and international law provide for settling conflicts between states through negotiations based on mutual respect for each other’s independence, sovereignty and non-interference in the internal affairs of the other.

This disaster can be resolved only if power-hungry world leaders renounce their arrogance and interventionism, and help Ukraine become a prosperous but neutral buffer nation between Western Europe and Russia. If not, the partition of Ukraine will be inevitable.