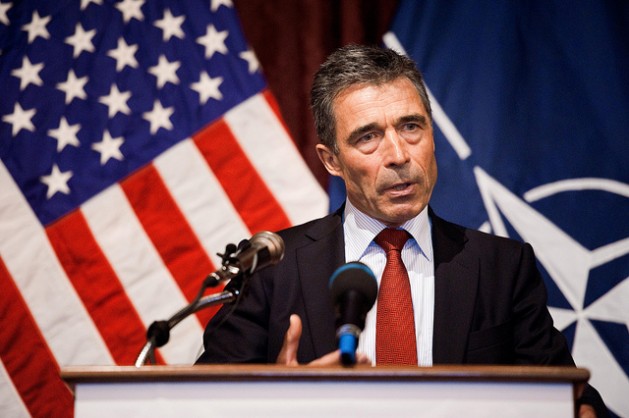 NEW YORK, Sep 2 2014 (IPS) - It is ironic that at this moment in history when so many people and nations around the world are acknowledging the 100th anniversary of our planet’s hapless stumble into World War I, great powers and their allies are once again provoking new dangers where governments appear to be sleepwalking towards a restoration of old Cold War battles.

A barrage of conflicting information is broadcast in the various national and nationalistic media with alternative versions of reality that provoke and stoke new enmities and rivalries across national borders.

Moreover, NATO’s new disturbing saber-rattling, with its chief, Anders Rasmussen, announcing that NATO will deploy its troops for the first time in Eastern Europe since the Cold War ended, building a “readiness action plan”, boosting Ukraine’s military capacity so that, “ In the future you will see a more visible NATO presence in the east”, while disinviting Russia from the upcoming NATO meeting in Wales, opens new possibilities for endless war and hostilities.

The world can little afford the trillions of dollars in military spending and trillions and trillions of brain cells wasted on war when our very Earth is under stress and needs the critical attention of our best minds [...].
With the U.S. and Russia in possession of over 15,000 of the world’s 16,400 nuclear weapons, humanity can ill-afford to stand by and permit these conflicting views of history and opposing assessments of the facts on the ground lead to a 21st Century military confrontation between the great powers and their allies.

While sadly acknowledging the trauma suffered by the countries of Eastern Europe from years of Soviet occupation, and understanding their desire for the protection of the NATO military alliance, we must remember that Russia lost 20 million people during WWII to the Nazi onslaught and are understandably wary of NATO expansion to their borders in a hostile environment.

This despite a promise to Gorbachev, when the wall came down peacefully and the Soviet Union ended its post-WWII occupation of Eastern Europe, that NATO would not be expanded eastward, beyond the incorporation of East Germany into that rusty Cold War alliance.

Russia has lost the protection of the 1972 Anti-Ballistic Missile Treaty, which the U.S. abandoned in 2001, and warily observes missile bases metastasizing ever closer to its borders, in new NATO member states, while the U.S. rejects repeated Russian efforts for negotiations on a treaty to ban weapons in space, or Russia’s prior application for membership in NATO.

Why do we still have NATO anyway? This Cold War relic is being used to fire up new hostilities and divisions between Russia and the rest of Europe.

Civil Society demands that an independent international inquiry be commissioned to review events in Ukraine leading up to the crash of Malaysian Airlines flight MH17 and of the procedures being used to review the catastrophic aftermath, including this latest outbreak of hostile actions from NATO.

Indeed, Russia has already called for an investigation of the facts surrounding the Malaysian airplane crash. The international investigation should factually determine the cause of the accident and hold responsible parties accountable to the families of the victims and the citizens of the world who fervently desire peace and peaceful settlements of any existing conflicts.

More importantly, it should include a fair and balanced presentation of what led to the deterioration of U.S.–Russian relations since the fall of the Berlin Wall, and the new hostile and polarized posture that the U.S. and Russia with their allies find themselves in today with NATO now threatening greater militarisation and provocations against Russia in Eastern Europe.

The United Nations Security Council, with U.S. and Russian agreement, has already passed Resolution 2166 addressing the Malaysian jet crash, demanding accountability, full access to the site and a halt to military activity, which has been painfully disregarded at various times since the incident.

One of the provisions of Resolution 2166 notes that the Council “[s]upports efforts to establish a full, thorough and independent international investigation into the incident in accordance with international civil aviation guidelines.”

Further, the 1909 revised Convention on the Pacific Settlement of International Disputes adopted at the 1899 Hague International Peace Conference has been used successfully to resolve issues between states so that war was avoided in the past.

Regardless of the forum where the evidence is gathered and fairly evaluated, all the facts and circumstances should be made known to the world as to how we got to this unfortunate state of affairs on our planet today and what might be the solutions.

All the members of NATO together with Russia and Ukraine are urged to end the endless arms race, which only feeds the military-industrial complex that U.S. President Eisenhower warned against.

They must engage in diplomacy and negotiations, not war and hostile alienating actions.

The world can little afford the trillions of dollars in military spending and trillions and trillions of brain cells wasted on war when our very Earth is under stress and needs the critical attention of our best minds and thinking, and the abundance of resources mindlessly diverted to war to be made available for the challenges confronting us to create a livable future for life on earth.