UNITED NATIONS, Oct 15 2012 (IPS) - After 20 long years of negotiations on a proposed expansion of the Security Council, African countries continue to be left out in the cold – even as African leaders complain that the international community has failed to respond to their demands for two permanent seats in the most powerful body at the United Nations. 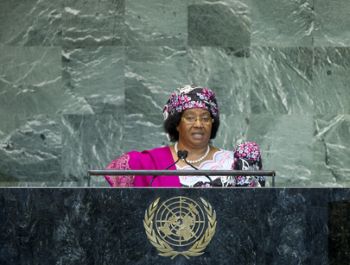 Joyce Banda, the president of Malawi, said Africa makes up the single largest region within the United Nations, and a very significant proportion of issues discussed in the Security Council concern the African continent. Credit: UN Photo/J Carrier

When heads of state took the podium at the General Assembly sessions last month, an overwhelming majority of the more than 40 African political leaders criticised the marginalisation of their continent.

Speaker after speaker complained about the continued absence of Africa among countries which hold the five permanent seats (P5) in the Security Council – the United States, Britain, France, China and Russia.

Africa’s longstanding demand for at least two permanent seats with veto powers, and five non-permanent seats, as agreed by African heads of state back in March 2005, is still far from reality.

But there is a reason for this, says Dr. Kwame Akonor, associate professor of political science at Seton Hall University in New York, who has written extensively on the politics and economics of the continent.

“That the membership and power relations of the U.N. Security Council (UNSC) are anachronistic and inequitable, given the geopolitical realities of the 21st century, is irrefutable,” he told IPS.

But any significant reform aimed at changing the membership or procedures of the UNSC will meet fierce resistance from the five veto-wielding permanent members, who are unlikely to relinquish their rights easily, said Akonor, who is also director of the Centre for African Studies and the African Development Institute, a New York-based think tank.

Addressing the General Assembly sessions last month, Joyce Banda, the president of Malawi, said Africa makes up the single largest region within the United Nations, and a very significant proportion of issues discussed in the Security Council concern the African continent.

But still, she said, Africa’s longstanding demand is in limbo.

Robert Mugabe, the longtime president of Zimbabwe, was one of the most vociferous in demanding representation in the Security Council.

“For how long will the international community continue to ignore the aspirations of a whole continent of 54 countries?” he asked.

“Is this good governance? Is this democracy? And is this justice?” he asked. “We shall not be bought off with empty promises, nor shall we accept some cosmetic tinkering of the Security Council disguised as reform.”

The president of Gambia, Yahya Jammeh said, “Our collective security will continue to be undermined by geopolitical considerations unless and until we find the courage to reform the Security Council.”

The demand for permanent representation in the UNSC also came from several other leaders and officials from Africa, including Equatorial Guinea, Central African Republic and Tanzania.

At a meeting of African leaders in Ethiopia in March 2005, the African Union (AU), which represents virtually all of the states in the continent, adopted a resolution calling for two permanent and five non-permanent seats.

But the AU did not identify the two countries for the permanent seats because that question has remained divisive, with at least three countries making claims: South Africa, Nigeria and Egypt, among others.

The resolution laid down the following conditions: Even though Africa is opposed in principle to the veto, it is of the view that so long as it exists, and as a matter of common justice, it should be made available to all permanent members of the Security Council.

Secondly, the African Union should be responsible for the selection of Africa’s representatives in the Security Council, and most importantly, the question of the criteria for the selection of African members of the Security Council should be a matter for the AU to determine, taking into consideration the representative nature and capacity of those chosen.

Akonor told IPS that for Africa, the question of representation is more fraught because it cannot seem to agree on which country (or countries) to represent it at the Security Council.

“The paralysis, amongst African leaders, when it comes to how it will be represented has contributed to the continent’s marginalisation on discussions on any plausible reform measures,” he said.

One solution, he argued, is for African states to take the concept of Pax Africana seriously and rely on themselves when it comes to the establishment, enforcement and consolidation of their own peace and security.

As current negotiations stand, there are four countries (G4) who are frontrunners for permanent seats (without vetoes): India, Brazil, Germany and Japan.

A longtime political observer who has been monitoring the negotiations told IPS the simple answer is that the G4 never gave the African countries a firm commitment for two African seats (with veto powers).

Subsequently, the G4 gave up their bid for veto powers, agreeing to a new category of “permanent seats WITHOUT veto power”. But this is not acceptable to the African Group.

Had the Africans ever come on the side of G4, they would have had the required two-thirds majority in the General Assembly to push forward their claim for permanent seats, he added.

Rev. Gabriel Odima, president of the Africa Center for Peace and Democracy, told IPS there is no doubt the West has marginalised the African continent. But he also blamed African leaders for the status quo.

Impoverishment and conflict are the basic tools and economic forces which have engulfed the continent of Africa for years, he pointed out.

The absence of democracy, human rights abuses and poor governance continue to undermine Africa’s effort to play a role on the world stage, said Rev Odima.

“How could (permanent UNSC seats) be possible when the continent has failed to prevent the massacre in the Democratic Republic of Congo, human rights violations in Uganda and the looming crisis in Kenya? How could this be possible when African leaders have failed to manage their own affairs at home?” he asked.

The international community should help Africa move from the stigma of colonial legacy to a viable society where hunger is no longer a threat to human existence, where ballots replace guns, and where dictators will be brought to justice and held accountable for their atrocities against their people, he added.