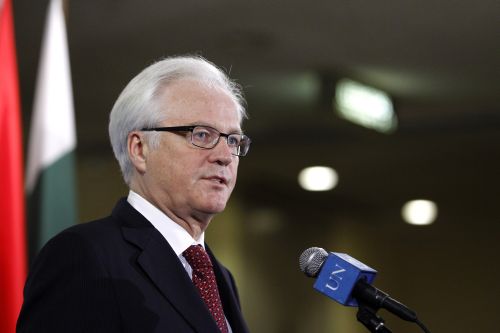 UNITED NATIONS, Jul 23 2012 (IPS) - Just before the Western-inspired resolution against Syria was vetoed in the U.N. Security Council (UNSC) last week, Russian Foreign Minister Sergey Lavrov was quoted as saying the United Nations was trying to support a revolutionary movement inside the country – which happens to have strong political, economic and military links to Moscow.

“If we are talking about a revolution,” he said, “then the U.N. Security Council has no place for this.”

As a former Russian permanent representative to the United Nations, Lavrov knows the Security Council inside out because he not only served in the U.N.’s most powerful political body but also presided over some of its meetings.

But when Russia cast its veto, along with China, to “protect” the regime of President Bashar al-Assad, Moscow sent a strong message to the United States and Western powers: the United Nations will not be party to a conspiracy to oust the Syrian president, as the Security Council did in Libya last year.

Last week’s double veto – for the third time against threatened sanctions on Syria – proved once again that Western nations have limitations on the exercise of their power in the Security Council chamber.

The vetoes also demonstrated there are limits to the extent to which the United Nations can be mobilised as an instrument of Western policy in the Middle East – despite the unilateral 2003 U.S. attack on the Saddam Hussein regime in Iraq without Security Council authorisation.

Having reached a dead end at the United Nations, and with no appetite for a new war in the Middle East, the North Atlantic Treaty Organisation (NATO), spurred by the United States, will try to undermine Assad by providing increased support for rebel groups and tightening Western sanctions, according to diplomatic sources here.

“The Western powers have hit a brick wall,” says one Asian diplomat, “and the United Nations has turned out to be an insurmountable barrier.”

Mouin Rabbani, a contributing editor to the Middle East Report, told IPS: “If the Western powers do reach the conclusion that it is in their interest to intervene in Syria, don’t expect them to wait for UNSC authorisation. Remember Iraq?”

A series of newspaper articles, moreover, have demonstrated that the U.S. and other Western powers, and a number of their Arab allies, are essentially doing as they please in Syria, he said.

“In other words, these states are doing more or less as they please, and are acting on the basis of their evaluation of how to implement a Syria policy, rather than being governed by constraints imposed on activities by the absence of U.N. cover,” said Rabbani, a veteran Middle East analyst.

The Syrian uprising, which began about 17 months ago, has claimed more than 10,000 lives, including civilians and also military personnel defending the Assad regime.

On Friday, the Security Council approved a one-month extension of a 300-member U.N. monitoring mission in Syria, which has been trying to track the situation inside the war-torn country.

“But I am not able to verify that it is true that Syria has a considerable amount of chemical weapons,” he said.

Ban said what is of concern is that Syria is not a party to the chemical weapons convention which bars the deployment of these weapons of mass destruction.

Still, he said, all countries have an obligation not to use any weapons of mass destruction – whether or not they are state parties to the convention.

Analysing the ongoing developments, Rabbani told IPS there is a widespread belief that China, and even more so Russia, are today seeking to teach the West a lesson in the context of the manner in which Russia and China believe NATO abused UNSC resolutions in early 2011 to invade Libya and manage regime change – or, for that matter, abused the UN Charter a decade ago with the invasion and occupation of Iraq.

“There’s likely an element of truth to that, and senior Russian and Chinese officials have more or less made this point themselves,” he said.

Nevertheless, he pointed out, “I wouldn’t exaggerate this point. It was abundantly clear from the moment the UNSC Libya resolution was passed that there was going to be an armed attack on that country, and it materialised almost immediately.”

“I have difficulty believing that seasoned Russian and Chinese diplomats were so tremendously naive they had no clue about the consequences of permitting that resolution to pass, and about what would come next,” said Rabbani.

In terms of an explanation of Russian policy, he argued, this is not the Cold War, where Washington’s loss is necessarily Moscow’s gain.

“Syria is the only remaining unambiguously pro-Russian Arab state, and rather strategically situated at that, and I think this, more than factors such as access to the Tartus naval base and military sales and debts, explains Russian support for the regime in Damascus,” Rabbani said.

There are apparently more important strategic considerations, and not just quantifiable interests, at stake, added Rabbani.

He pointed out that Bashar’s father Hafiz emerged from the twin blows of the Muslim Brotherhood uprising and the 1982 invasion of Lebanon stronger and more secure, so much so that upon his death in 2000 power easily passed to his son.

“It seems inconceivable that Bashar can emerge from the present crisis in similar fashion, if at all,” he added.

Rabbani said there is much talk in the Arab World that for the West and Israel the preferred outcome is a weakened and more pliant Bashar – “preserving the neo-liberal brat but jettisoning the ally of Iran and Hezbollah.”