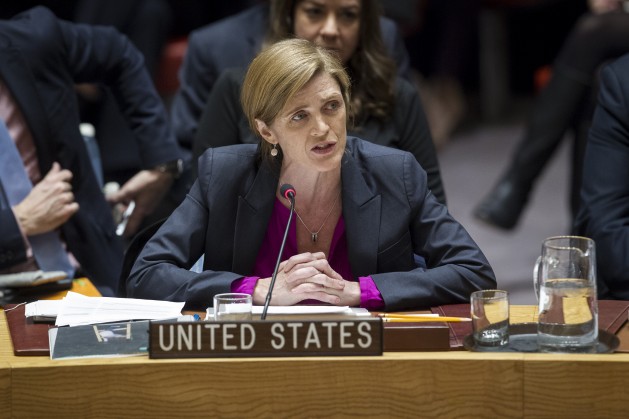 Samantha Power, outgoing Permanent Representative of the United States of America to the UN, addressing the council after a controversial vote on Israeli Settlements in December 2016. Credit: UN Photo/Manuel Elias.

UNITED NATIONS, Jan 18 2017 (IPS) - South Carolina Governor Nikki Haley, nominated to be the next U.S. Ambassador to the UN, outlined her vision of a strong U.S. role in the human rights institution at a confirmation hearing today.

Noting her potential role as a “fresh set of eyes” and an “outsider,” Haley highlighted the need for a strong U.S. leadership position at the UN.

“When America fails to lead, the world becomes a dangerous place. And when the world becomes more dangerous, the American people become more vulnerable,” she told the Senate Foreign Relations Committee, adding that she will bring back the U.S.’ “indispensable voice of freedom.”

When asked about Russia, Haley expressed caution in trusting them but suggested that their government could be an asset.

“Russia is trying to show their muscle right now…and we have to continue to be very strong back. We need to let them know that we are not okay with what happened in Ukraine and Crimea and what is happening in Syria, but we are also going to tell them that we do need their help with ISIS,” she said.

In her last major speech, current U.S. Ambassador to the UN Samantha Power similarly noted U.S. interest in solving problems and cooperating with Russia, but expressed dire concerns over Russia’s “aggressive and destabilizing actions” in Crimea, Syria and its interferences in numerous governments.

“Russia’s actions are not standing up a new world order. They are tearing down the one that exists. This is what we are fighting against—having defeated the forces of fascism and communism, we now confront the forces of authoritarianism and nihilism,” she said.

During her hearing, Haley acknowledged that Russia violated the international order when it invaded Crimea and its actions in Syria constitute war crimes, and that she supports preserving sanctions against the government. She also noted the need to stand up to any and all countries that attempts to interfere with the U.S.

This represents what could be perceived as a break with President-elect Trump who has previously denied intelligence pointing to Russian involvement in the recent U.S. elections.

When asked about these comments, Haley again differentiated her position from Trump’s:

“It is important that we have alliances…I think as we continue to talk to him about these alliances and how they can be helpful and strategic, I do anticipate he will listen to all of us and hopefully we can get him to see it the way we see it,” she said.

“I’m going to control the part that I can,” she continued.

Haley also blasted the UN for what she described as its “biased” position on Israel during the hearing, stating: “Nowhere has the UN’s failure been more consistent and more outrageous than its bias against our close ally Israel.”

Like President-elect Trump, Haley particularly criticised the recent passage of a Security Council resolution demanding an end to Israeli settlements, calling it a “terrible mistake” that makes a peace agreement even harder to achieve.

During the vote in December, the U.S. broke with long-standing foreign policy towards Israel by abstaining, rather than vetoing. The other 14 members of the 15 member council all voted for the resolution.

Haley vowed to never abstain when the UN takes action that comes in direct conflict with U.S. interests, including actions against Israel.

She highlighted the need for UN reforms, stating that the goal is to “create an international body that better serves the American people.” To bring about changes, Haley suggested using U.S. funding as leverage.

“We are a generous nation but we must ask ourselves what good is being accomplished by this disproportionate contribution. Are we getting what we paid for?” she asked. She pointed to the Human Rights Council as an example, questioning their role in supporting and promoting human rights while countries such as Cuba and China are members.

The U.S. currently contributes 22 percent of the UN’s budget.

Recent legislation proposed by two U.S. Republican Senators would see the United States withdraw its funding not only to the UN Secretariat but also to the entire UN-system, including UNICEF, the UN Development Program and UN Women.

Though initially stating that she would not “shy away” from withdrawing U.S. funds to achieve reforms, Haley later backtracked and said that she does not support a “slash and burn” approach in terms of pulling funding from the UN when there are undesirable outcomes, but rather use funds as leverage to help make agencies more effective.

Haley is a South Carolina-born daughter of Indian immigrants and is the first female and first minority governor of her state. She gained national attention after calling for the removal of the Confederate flag from the state’s Capitol. Haley will replace Ambassador Power as the only woman on the 15-member council.