Joseph Chamie is a former Director of the United Nations Population Division. 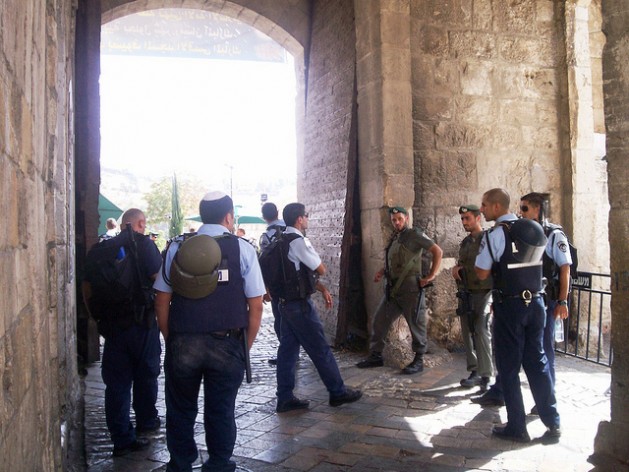 UNITED NATIONS, Apr 9 2015 (IPS) - The large majority of countries, and most of the people in the world, already recognise Palestine as an independent state.

Among the member states of the United Nations, for example, 135 countries – representing about 82 percent of world population – officially recognise Palestine as an independent state versus 50 countries that do not recognise the Palestinian state. 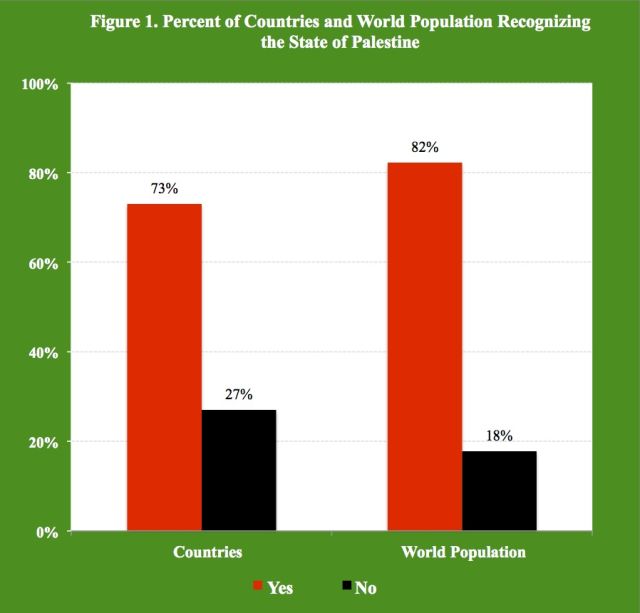 In addition to Israel, key countries that do not recognise Palestine as an independent nation include France, United Kingdom, the United States – each with a veto in the U.N. Security Council – as well as Australia, Canada, Germany, Italy, Japan, Mexico, Netherlands, Republic of Korea, Spain and Switzerland.

The general position of these countries is that the recognition of an independent Palestinian state can only be achieved from direct negotiations between Israelis and Palestinians.

However, due to frustration over stalled peace talks many of the countries whose governments do not currently recognise the Palestinian state are encountering initiatives and pressures from parliaments and the general public to modify their policies.

Also, a multi-country survey done several years ago found that more people backed recognition of Palestine as an independent state than opposed it. Across the 19 countries survey, 49 percent supported the proposal while 21 percent said their government should oppose recognition of a Palestinian state.

In the United States public opinion regarding Palestinian statehood has fluctuated considerably over time. As recently as 2012, a majority of the American public, 51 percent, supported the establishment of an independent Palestinian state in the West Bank and the Gaza Strip, with 37 opposing it and 12 percent having no opinion.

A survey of Americans in March 2015 reported that 39 percent are in support, 36 percent in opposition and 25 percent with no opinion concerning the establishment of a Palestinian state.

However, when details of the two-state solution are spelled out regarding such contentious issues as territorial compromise, settlement evacuation and dividing Jerusalem, support collapses. Approximately three-quarters of Jewish Israelis recently polled, for example, opposed the establishment of a Palestinian state along the pre-1967 borders.

Similarly, following the disappointing failure of recent U.S.-mediated peace talks, a poll of Palestinians found about one-third expressed support for a two-state solution.

In addition to the collapse of the U.S.-mediated Israeli-Palestinian negotiations, an important element influencing this possible shift in the policies of countries that do not recognise Palestine is the election campaign statement made by Israeli Prime Minister Benjamin Netanyahu that caused an international uproar.

Although he subsequently toned down his remark, the Israeli prime minister pledged prior to the Israeli election that a Palestinian state would not be established on his watch.

Awaiting the formation of the next Israeli government, the United States, key members of the European Union and several other countries have stated that they are reassessing aspects of their relations with Israel. For some of those governments, those reassessments could include recognition of Palestinian statehood.

Britain’s Deputy Prime Minister Nick Clegg indicated, for example, that in the wake of Netanyahu’s apparent refusal to back a two-state solution, the world, including the British Parliament, would have no option, inevitably, but to recognise a Palestinian state. 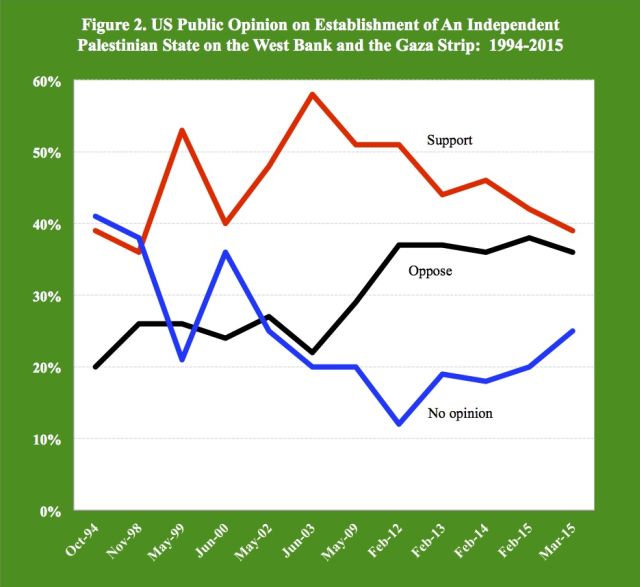 Source: Author’s calculations based on poll data by Gallup and Washington Post/ABC

France’s foreign minister Laurent Fabius indicated recently that his country along with its allies intend to propose a U.N. Security Council resolution in the coming weeks that could present a framework for negotiations toward resolving the Israeli-Palestinian conflict.

The proposal is expected to stress the right of both peoples to live in their respective nation-states and declare that the conflict must end through negotiations between the Israelis and Palestinians.

An earlier informal draft resolution, which was circulated in late 2014 and penned by France, pushes for a lasting, comprehensive peaceful two-state solution. Essentially it aims to achieve two independent, democratic and prosperous states, Israel and a sovereign, contiguous and viable State of Palestine living side by side in peace and security within mutually and internationally recognised borders, no later than 24 months after the resolution’s adoption.

The key elements of the draft framework for the negotiated two-state solution are to be based on: (a) the borders on 4 June 1967 with mutually agreed limited land swaps: (b) security agreements that respect sovereignty of a non-militarized Palestinian state, with a full phased withdrawal of Israeli forces; (c) an agreed, just and realistic solution to the refugee question; (d) Jerusalem as the shared capital of the Israel and Palestine; and (e) agreed settlement of other outstanding issues, including water.

If the U.N. Security Council adopts the French draft resolution, which will require the U.S. not to exercise its veto, an international peace conference on the Israeli-Palestinian conflict is to be convened. This event is then to be followed with France and its other European allies recognising an independent Palestinian state built principally on the 1967 borders.

Achieving a two-state solution today has become considerably more complicated logistically than when originally proposed by the U.N. in 1947 due to changing demographics.

For example, when U.N. Resolution 181 divided Mandatory Palestine into two states, one Jewish and other Arab, their respective populations were approximately one-tenth their current sizes, each less than 0.9 million. Today the Israeli population has grown to 8.3 million and the Palestinian population in the West Bank and the Gaza Strip stands at about 4.5 million, with more than 5 million additional Palestinians residing in neighbouring countries.

It seems abundantly clear that the various peace initiatives to resolve the Israeli-Palestinian conflict over the past 40 years have not achieved the desired goal. With most of the world now recognising the state of Palestine, the world’s major powers need to resolve this nearly 70-year conflict and bring about a lasting peace for Israelis and Palestinians alike.