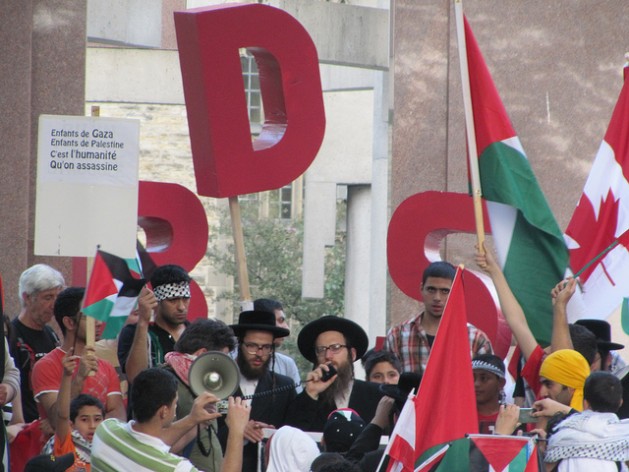 BDS and Rabbis For Palestine. Credit: Mike Gifford/cc by 2.0

WASHINGTON, May 3 2014 (IPS) - The recent suspension of the U.S. -engineered Israeli-Palestinian talks signals a much deeper reality than the immediate factors that caused it. The peace process and the two-state solution, which for years were on life support, are now dead.

It is time for the United States and the rest of the international community to stop the 20-year old quixotic effort to resurrect a dead “process” and to seriously begin exploring other avenues for Israeli-Palestinian coexistence between the Jordan River and the Mediterranean Sea.

The two-state solution has been a convenient policy position that allowed negotiations to go on and on, prompted primarily by the argument that no credible alternatives existed. Many governments, diplomats, negotiators, politicians, academics, NGOs, and consultants on both sides of the Atlantic and in the region have staked their life-long careers on the two-state paradigm.

Dozens of international agreements and declarations and thousands of meetings have been held all around the globe on the so-called modalities of a two-state solution. Unfortunately, all have come to naught.

Whenever the two-state approach was questioned over the years, its defenders would quickly ask, “What’s the alternative?” and would dismiss the “one-state” suggestion and similar options as non-starters. The retort has always been that no Israeli government would dare contemplate any proposal that involves Israelis and Palestinians living together in one political entity.

Palestinian nationalists and ruling economic and political elites, who benefited from their association with the PLO power structure, whether in Ramallah or elsewhere, supported the two-state formula despite their belief that Oslo was a hollow victory that would never lead to statehood. They went along because in the view of one Palestinian at the time, “It was the only game in town.”

The Arab states that advocated this approach drew comfort from the rhetoric because it appealed to Western countries, especially the United States. Yet, these states have failed to commit the necessary resources and political capital and seriously pursue their “Arab Peace Initiative” to its intended conclusion.

Official Arab leaders’ rhetoric continued to extol their unwavering commitment to Palestine, but they gave priority to their separate national interests, which often included unofficial economic, political, and intelligence contacts with Israel.

Successive Israeli governments played a similar game. Whenever the discussions of establishing a Palestinian state got serious, they advanced new conditions and “redlines”, which made it more difficult for Palestinian leaders to accept. The entire negotiating enterprise was reduced to talks about talks, resulting in decoupling the negotiation “process” from the envisioned “peace”.

The pro-Israeli lobby in Washington has successfully erected a solid pro-Israeli stand in the United States Congress. Such support, which has always been identified with right-wing policies in Israel, has severely constrained the diplomatic flexibility of the Executive Branch of the U.S. government.

In lieu of a political settlement, Western countries and the United Nations provided massive aid programmes to Palestinians, and Palestinian leaders and ruling elites benefited disproportionately from the largesse, resulting in newfound wealth and rampant corruption. In the absence of government accountability and transparency, it’s not clear where the huge chunks of the money went.

While rhetorically committed to a two-state solution, high-level PA officials have not been uncomfortable with this arrangement of the political status quo under Israeli occupation. So much so, in fact, that a Palestinian intellectual has described the situation as “The National Sell-out of a Homeland.”

I have supported the two-state solution for almost five decades. Based on my field research in the Occupied Territories in the late 1970s, I published a short book titled “The West Bank and Gaza: Toward the Making of a Palestinian State,” which argued for the creation of a Palestinian state in those parts of Palestine.

In reaction, self-proclaimed Palestinian nationalists, including the current Palestinian negotiator, Saeb Erekat, attacked me publicly for “advocating an American position.” Some pro-Palestinian newspapers in the Gulf derisively described me as a “Palestinian American Sadatist”, a reference to Egyptian President Anwar Sadat’s peace treaty with Israel.

Of course, 10 years later, the PLO formally supported the two-state approach and proceeded with the Oslo agreement.

Sadly, I have come to the conclusion that the two-state option is simply no longer viable. The two parties and the international community must search for other options that could accommodate the two peoples living together.

I reached this position fully cognizant of the realities on the ground – Israeli occupation, Palestinian factionalism, and rising poverty and frustration among Palestinians in Gaza, the West Bank and in Israel – and the lack of credible alternatives to the two-state approach.

As more and more Palestinians search for alternatives, they are transforming their confrontation with the Israeli occupation and anti-Arab discrimination in Israel to a peaceful struggle for human rights, justice, and economic self-sufficiency. BDS (Boycott, Divestment, and Sanctions) has become the global rallying cry against Israeli occupation and continued settlement construction.

Some members of the Israeli cabinet, on the other hand, have begun talking publicly about taking “unilateral actions” on the West Bank, including annexing Area C and the major settlement blocs. Meanwhile, Israeli security forces continue to enter Area A, which is nominally ruled by the PA, at their whim.

In the absence of a Palestinian state, the Israeli government will be faced with a growing Palestinian population in Gaza, the West Bank, and in Israel, which, taken together, constitutes almost 50 percent of the total population between the Mediterranean and the Jordan River.

The international community and the two peoples should begin a serious exploration of new modalities based on justice, fairness, and equality. These could range from a unitary state to confederal arrangements that guarantee Palestinians equal rights, privileges and responsibilities. But all of them require an end to the occupation.

Some critics might consider this approach Pollyannaish, but it’s not unthinkable in light of the demonstrated failure of the two-state approach.

Emile Nakhleh is a former Senior Intelligence Service Officer in the Central Intelligence Agency, a Research Professor at the University of New Mexico, and author of ‘A Necessary Engagement: Reinventing America’s Relations with the Muslim World’.