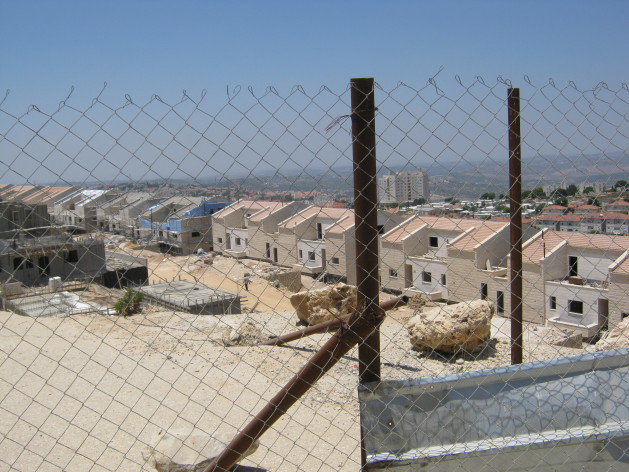 ARIEL, Occupied West Bank, Jul 19 2013 (IPS) - As the European Union delegitimises the settlement enterprise further by officially announcing that, effective Jul. 30, its 28 member states are required to differentiate between pre-1967 Israel and Israeli-occupied territories, Israelis supportive of a two-state solution vigorously lead their own boycott campaign against Ariel, a settlement town of 20,000.

The fresh EU directive bars funding or cooperation with settlements in the West Bank and East Jerusalem. Future agreements with Israel will stipulate that the settlements are not part of Israel, and thus will not benefit from these agreements.

Last month, Mc Donald’s-Israel declined to open an eatery in the first mall to be built in Ariel. With over 170 branches in the country, of which some 40 are kosher, the fast food chain’s franchise is owned by Omri Padan, a founder of Peace Now.

The activist group’s chairman, Yariv Openheimer, qualifies both decisions as “moral and legitimate”.

“The Israeli government is fighting a lost battle against a worldwide understanding that the occupation must end,” Openheimer tells IPS. “Israel can force neither individuals and companies nor diplomats to participate in settlements activities.”

How is the campaign perceived in Ariel?

Having just completed a four-day infantry exercise in the area, conscripts leave a pile of assault rifles on the lawn of the municipal pool and line up in front of the barbecue grill.

“That’s an Ariel burger,” jokes a soldier at the thought that the fast food chain spoiled their chance for a Big Mac delight.

“We’re against any boycott,” declares Ariel Mayor Eliyahu Shaviro. The Council of Jewish Communities of Judea and Samaria, the settlements umbrella organisation in the West Bank, demands that “all European projects (for Palestinians) be stopped until the unilateral EU decision is rescinded.”

“These are not boycotts against Israel,” Openheimer cautions. “Many Israelis also disagree with the settlements enterprise and don’t buy their goods, especially since peace talks hit a dead end (in 2010).”

The Boycott, Divestment and Sanctions movement appeals very little to pro-peace Israelis who suspect the initiative is not directed only at settlements but against Israel proper.

Ariel is the one settlements targeted by the Israel boycott campaign.

In 2011, 145 academics opposed to settlement expansion announced their boycott of Ariel College with its 18,500 students and staff – to no avail. Six months ago, the government officially recognised the college as a fully accredited university.

Several actors, authors and directors refuse to work at the town’s Centre for the Performing Arts inaugurated three years ago.

Many companies, including Barkan Winery, Multilock, Bagel-Bagel, all of whom exported goods manufactured in the Barkan industrial zone near Ariel, Israel’s largest in the West Bank, have relocated their factories.

“Arabs might return to a cycle of violence if they’re unemployed,” warns Shaviro. “We mustn’t harm education, culture or businesses. We’ve got to preserve coexistence and the fabric of life here.”

But why boycott Ariel and not other settlements?

“The settlers invest lots of energy to create a symbol of normalcy, as if Ariel resembled Tel Aviv. Thus most Israelis feel that the settlements are in Israel, which they’re not, and the boycott tells them that.”

“The state sent us here. We’re deep in the heart of the national consensus,” Shaviro tells IPS. “Whoever refuses to visit Ariel, we’re fine without him.”

In return for former prime minister Ariel Sharon’s decision to unilaterally withdraw soldiers and settlers from the Gaza Strip eight years ago this month, former U.S. President George W. Bush stated in a letter the following:

“In light of new realities on the ground, including already existing major Israeli population centres, it is unrealistic to expect that the outcome of final status negotiations will be a full and complete return” to the pre-1967 lines.

The oblique reference to “major population centres” meant that within a two-state solution, the U.S. would eventually consent to the annexation by Israel of east Jerusalem’s Jewish neighbourhoods and of four settlement blocs – including Ariel.

If attached to Israel, the ‘Ariel finger’ would be just that – a finger stuck in the midst of a future Palestinian state, almost dividing it in two subdivisions while being surrounded by it.

A 20-minute drive on Highway 5 exemplifies the finger-like link between Ariel and Israel. The road is insulated by fences.

“The people who built Ariel (in 1978) knew they had the power to prevent a Palestinian state,” reckons Openheimer.

President Barack Obama never endorsed the Bush Letter to the letter, declaring instead in 2011 that “the borders of Israel and Palestine should be based on the 1967 lines with mutually agreed (territorial) swaps”, without referring to settlement blocs.

“There’s a wide national agreement that Ariel is part and parcel of Israel, with or without peace,” claims Shaviro.

When the ten-month settlement freeze ended in 2010, a building project broke ground in Ariel, which now materialises as a cottage neighbourhood with a view.

In all, 650 housing units are currently under construction. The university is putting the final touch on a new library edifice and expanding the campus. There’s a building boom in the air. But it might be short-lived.

“Not a single building permit has been allocated for a whole year,” the mayor says. “I expect the government to expand settlements.”

U.S. Secretary of State Jim Kerry, engaged in a sixth round of Mideast shuttle diplomacy, hopes to bring Israel and the Palestinian Authority back to the negotiation table before September.

Meanwhile, the soldiers enjoy a splashing moment at the pool with a water war game. The municipal host knows it – their guests are more at the heart of national legitimacy than his settlement.