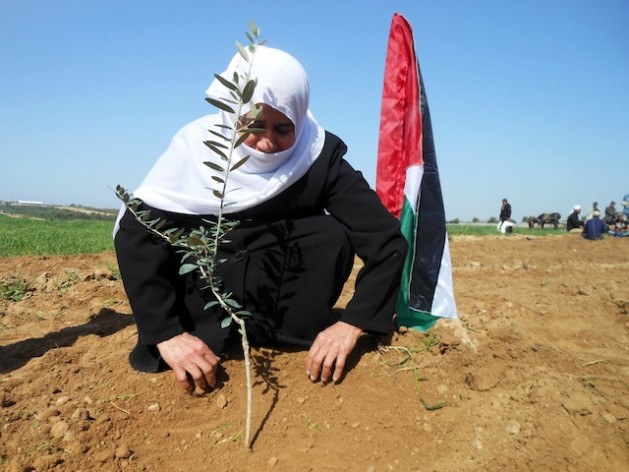 ZEITOUN, Gaza, Feb 10 2013 (IPS) - Tawfiq Mandil, 45, stands amongst hundreds of Palestinian farmers, activists, and international supporters in the Gaza Strip’s eastern Zeitoun district, about half a kilometre from the border with Israel. They are renewing a call for the boycott of Israeli goods.

With signs reading ‘Boycott Israeli Agricultural Products’ and ‘Support Palestinian Farmers’, Mandil and others protesting Israeli oppression of Palestinian farmers joined together Saturday to plant olive trees on Israeli-razed farmland and to implore international supporters to join the boycott of Israeli agricultural produce.

Mandil believes that the boycott is his only hope for justice for Palestinian farmers being targeted by the Israeli army and oppressed by Israel. “We hope that it will put pressure on Israel to stop targeting us and allow us to farm our land as we used to.”

With an Israeli surveillance blimp hovering above and within sight of a remotely-controlled machine gun tower, the significance of the rally’s location near the ‘buffer zone’ was not lost. Israeli authorities prohibit Palestinians from accessing the 300 metres flanking the Gaza-Israel border. In reality, the Israeli army regularly attacks Palestinians up to two kilometres from the border in some areas, rendering more than 35 percent of Gaza’s farmland off-limits.

The Palestinian human rights organisation Al-Haq released a position paper last month condemning the Israeli settlement produce trade. The paper, ‘Feasting on the Occupation: Illegality of Settlement Produce and the Responsibility of EU Member States Under International Law’ highlights the means by which Israeli settlements benefit from the oppression of Palestinian farmers.

“While the EU has been quite outspoken in condemning settlements and their expansion, they continue to import produce from these same settlements and in doing so, help to sustain their very existence,” Al-Haq director general Shawan Jabarin notes in the Al-Haq press release.

“There is simultaneous action happening in the occupied West Bank,” says Mormech. “They’re planting near Yitzhar colony, which is notorious for its violence against Palestinians. Around the world, an estimated 30 countries are holding actions in solidarity with Palestinian farmers and fishers.”

The boycott action follows a growing number of initiatives emerging in recent years from the Gaza Strip.

Palestinian students in Gazan universities stepped up the Boycott call in 2012, releasing Youtube videos calling for political action, not aid, from international supporters.

The Palestinian Campaign for the Academic and Cultural Boycott of Israel (PACBI) has attracted international support, including the backing of numerous UK and North American universities and scholars.

Increasing numbers of cultural and religious associations, such as the Quakers’ Friends Fiduciary Corporation, are divesting from corporations that profit from or support Israel’s occupation of Palestinian lands. The United Church of Canada endorsed the boycott of goods produced in illegal Israeli settlements in August 2012.

“We are calling for implementation of UN Security Council resolution 242, which calls for withdrawal of occupation forces from the Gaza Strip, the West Bank, and east Jerusalem. The second demand is the implementation of the United Nations resolution 194, the return of all Palestinian refugees to the towns and villages from which they were ethnically cleansed in 1948. The third demand is the end to Israel’s apartheid policies in Palestine 1948. We want equality.”

“The Adidas campaign began in March 2012, when Adidas was sponsoring a marathon through parts of Jerusalem, including parts that are internationally recognised as occupied. The Ministry of Youth and Sports here called upon the Arab League to boycott Adidas in response to this, which a number of countries did.”

“Palestinian farmers can grow the fruits we consume,” said marketing director in the ministry Tahsen Al-Saqa. “We need to support and protect our own farmers. They’ve been economically devastated by the Israeli ban on exporting since 2006.”

“Boycott is the key, and it is growing,” says Adie Mormech. “The momentum is so much now that it is not going to stop. It’s going to be like South Africa.”