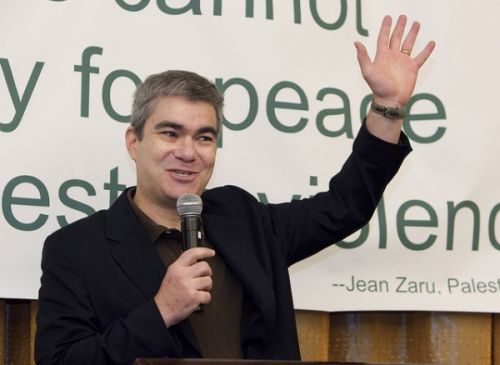 WASHINGTON, Dec 6 2012 (IPS) - Rabbi Brant Rosen leads a congregation in Evanston, Illinois and is author of the new book, Wrestling in the Daylight: A Rabbi’s Path to Palestinian Solidarity.

Speaking with Mitchell Plitnick, Rosen, co-chair of the Rabbinical Council of Jewish Voice for Peace, stressed that the views both in his book and in this interview are his own and do not represent his congregation. Excerpts follow.

Q: How has your personal view of Israel changed in the past four years?

A: I had seen the conflict as two peoples having two legitimate claims to the land of Israel-Palestine and the only way out of the morass is two states for two peoples. I had identified with Israel as a Jew; that was my narrative growing up. I have deep familial relationships there, visited Israel many times, and even considered moving there.

The shift in my views was a gradual thing, but the breaking point was Operation Cast Lead in 2008-2009 (this was the name Israel gave to its assault on the Gaza Strip at that time). I came to realise this was not a conflict between two equal parties but an essential injustice that began with the birth of the state of Israel and has continued since that time. It is a situation of one very powerful party bending the other to its will.

Once I spoke out about Israel’s outrages in Cast Lead, the dominoes really started to fall for me. As a congregational rabbi I was in a difficult place and people looked to me for guidance. About a year after that, I reassessed my relationship as a Jew to Israel, to the entire issue, not just Gaza, but about Zionism in general.

I become more involved in Palestine Solidarity work, reaching out to Palestinians, some of whom were friends and others who were activists in this area. So many of them reached out to me when I spoke out on Gaza, and I wanted to learn from them what their experience of this issue was.

Today, I know where I stand, very much a rabbi in the Jewish community, still serving my congregation, still motivated by Jewish values, but also someone who stands in solidarity with Palestinians in their struggle for human rights, equal rights and dignity in the land they either live in or seek to return to.

Q: Jewish Voice for Peace is one of the leading groups involved in targeted divestment from Israel’s occupation, a part of the Boycott/Divestment/Sanctions (BDS) movement that seeks to bring public economic and political pressure on Israel. How do you see the future of this movement?

A: I think the movement is growing by leaps and bounds, attracting more and more people. When the U.N. vote on Palestine’s non-member status hit, it drowned out another story I thought was actually more important: Stevie Wonder backed out of a fundraising concert for a U.S. group called the Friends of the Israel Defense Forces.

He is the latest celebrity to express his support for the Palestinian cause by cancelling such concerts following a long list of artists and entertainers who have cancelled shows in Israel. Whether they did it because of public pressure or because they believed it to be right, it shows the power of the boycott movement.

To create political change, leveraging people power is the best method; historically, this has consistently been the case. The fact that Israel reacts so harshly against it shows its potential. When Hillary Clinton says 3,000 new settlement units are “not helpful”, that doesn’t get Israel’s attention.

On the other hand, when Jewish Voice for Peace, Students for Justice in Palestine and a wide range of church groups succeed in getting a large holding company to divest from the occupation, that’s front page news in Israel. That is a sign that this has a great impact, when used in a smart and concerted way.

Contrary to the frequent accusations, BDS is not anti-Semitic. I think the argument that it unfairly singles out Israel from other human rights abusers is disingenuous… The question is not whether Israel is legitimate; it exists and is part of the international community. But if Israel acts in an illegitimate way, citizens around the world have the right and responsibility to leverage what power they can to get them to cease.

Q: Do you think the recent call by 15 mainstream Protestant leaders of many different denominations for an inquiry into whether U.S. aid to Israel is in compliance with existing U.S. law is a significant new development?

A: Yes. I think the most important thing is that the leaders are standing firm and are not backing down despite being excoriated and being called everything up to and including anti-Semites. That is important because up until now the covenant on religious relations has been that you can talk about anything BUT Israel, and this time they’ve broken with that.

They have until now been bullied by the Jewish establishment. This can usher in a new relationship where we can talk about anything, not only the things we have in common, but also these issues, like Israeli policy, where we don’t always agree. I’m proud that JVP stood behind the statement.

Jewish leaders said they would walk out of a planned interfaith summit, and demanded a separate summit to discuss these issues. I thought this was very damaging, this is not something resembling dialogue.

The Church leaders have issued a second statement saying they would be happy to meet with Jewish leaders about this, that we’re happy to talk, but we are not going back on what we said. This is very healthy; this is real dialogue, which occurs when you focus on the painful issues you don’t agree on.

It’s very important that Christians see that many Jews do stand with them when they make statements like this. The Jewish establishment does not represent the Jewish community. The Jewish community is much larger and more complex than these unaccountable representatives whose names most Jews don’t even know.