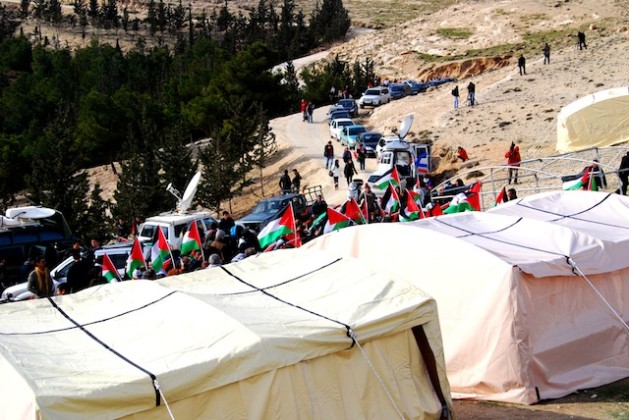 JERUSALEM, Apr 13 2013 (IPS) - Tent cities are being set up by Palestinians all over the West Bank to protest against Israeli settlements, building on a protest during the visit of U.S. President Barack Obama last month.

Holding signs reading ‘Obama: you are on the wrong side of history’ and ‘Obama: you promised hope and change – you gave us colonies and apartheid’, dozens of Palestinian activists set up tents on a hillside just outside of Jerusalem during Obama’s first official visit to Israel last month.

The tent village aimed to draw international attention to continued Israeli settlement building, and to unwavering U.S. support for Israeli policies. It was established in an area of the West Bank known as E-1, where Israel plans to expand the settlement of Ma’ale Adumim settlement.

Activists said in a statement that the village was a step “to claim our right as Palestinians to return to our lands and villages” and “to claim our sovereignty over our lands without permission from anyone.”

Hundreds of Palestinian activists built the first tent encampment called Bab Al-Shams, literally ‘Gate of the Sun’, on privately owned Palestinian land in the E-1 corridor in January. Despite being violently dispersed by Israeli police and soldiers a few days after it was established, Bab Al-Shams inspired the building of even more tent villages throughout the West Bank.

In February, tents were erected in the West Bank village Burin, the site of frequent Israeli settler attacks against Palestinian residents, and then near the southern West Bank town Yatta.

“Our hope is to encourage more and more of this and to build a national movement that brings Palestinians from different parts of Palestine, not only the West Bank, but also the Galilee and other places, to help each other stay on their land,” said Mazin Qumsiyeh, a Palestinian activist who participated in setting up many of the tent villages.

The author of ‘Popular Resistance in Palestine’, Qumsiyeh told IPS that the idea behind the tent villages builds on decades of Palestinian steadfastness in resisting Israeli efforts to displace them from their lands. “It’s not a new phenomenon,” Qumsiyeh said.

“There are six million Palestinians still living (here) after 90 years of ethnic cleansing, 90 years the Zionist movement tried to basically remove Palestinians from their land. The fact that they stayed is a form of resistance.”

According to a recent survey conducted by the Palestinian Centre for Policy and Survey Research of 1,270 Palestinians in the West Bank and Gaza Strip, 71 percent of respondents believed that “creating facts on the ground, such as the placement of tent encampments in area C, would be an effective means of confronting settlement expansion and protecting land threatened by settlers.”

According to Abdallah Abu Rahmah, a leader in the West Bank village Bil’in, which has held weekly demonstrations against the Israeli wall and settlements for eight years, the tent encampments represent a new strategy in Palestinian non-violent resistance.

“We try to use creative ideas and new ideas. We try to build our tents, using this type of non-violent resistance, to stop the plans of the Israelis of building settlements,” Abu Rahmah, who helped build several of the tent villages, told IPS.

“We know about the danger of the plan in E1, in the area of Bab Al-Shams; if the Israelis continue this plan, it will destroy the dream of Palestinians for independence and their country.”

"The fact that they stayed is a form of resistance."

Dena Qaddumi is an architect, and co-founder of arenaofspeculation.org, a website dedicated to exploring spatial resistance in Israel-Palestine. She told IPS that the tent encampments signal a less reactionary form of Palestinian resistance, especially since they sparked critical discussions both locally and internationally.

“Every day, Palestinians are spatially resisting in their particular localities but thus far it has been difficult to bring this together en masse so that they not only make international headlines, but expand the imagination – and this is critical – of Palestinians in Palestine and outside. On this latter point we can say (the tent villages were) a success.”

“We need to find ways to overcome these spatial constraints. Finding a way to bridge these spatial realities together and narrate the injustice of this situation is paramount.”