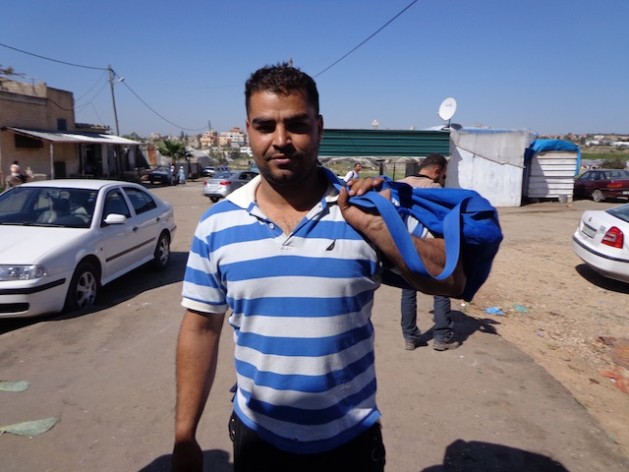 Adnan Omar from Azzun Atme who travels to work every day in Israel speaks of discrimination from Israeli settlers. Credit: Mel Frykberg/IPS.

AZZUN ATME, Occupied West Bank, Apr 6 2013 (IPS) - “At least we are not treated like dogs and made to feel so uncomfortable,” Amjad Samara, 30, a labourer from Nablus in the northern West Bank told IPS as he and a group of Palestinians waited at the checkpoint near Qalqilia to cross into Israel for their day job.

Samara was referring to the new Palestinians-only bus service that the Israeli authorities have introduced in the West Bank to “spare” Israeli settlers travelling on buses from the occupied West Bank to Israel the “discomfort” of having to share their transportation with Palestinians.

Some liberal members of the Knesset, or parliament, however, were not convinced. “This is what apartheid looks like,” stated Meretz party chairwoman Zahava Gal on her Facebook page.

“Instead of fighting racism, this government is actually collaborating with the racist system and creates different buses for Palestinians and for Israeli settlers,” he said. “In the West Bank, it’s not a democracy. It’s much closer to apartheid than to democracy.”

Transport Ministry officials said that Palestinians are not officially banned from riding on settler buses, but the experience of many Palestinian labourers tells a story different from the official policy.

“In the past when I tried to catch buses before with settlers on, often the bus wouldn’t stop for me and just drove past. Or if they stopped for settlers the driver would tell me I’m not allowed to get on,” labourer Adnan Omar, 28, from Azzun Atme told IPS.

“Even when we were allowed on it was a very unpleasant experience having to travel with the settlers who made it very clear we were not welcome. We would get dirty looks and sometimes verbal abuse,” Samara told IPS.

Several journalists who monitored the situation have reported seeing Palestinian labourers denied entry or ordered off.

According to some of the 29,000 Palestinian labourers who travel to Israel daily for work, there are, however, some advantages in the new bus lines.

“These buses are cheaper than the Palestinian mini-buses which are often used by many of my colleagues to travel to the Israeli green line. We also feel safer avoiding the settler buses and are more comfortable not being subjected to hostility from the settlers which at times has led to physical confrontations and assaults,” Omar told IPS.

While some Israeli officials have privately admitted that the introduction of the new bus service was not altogether for altruistic reasons, this development follows accusations of an increasingly apartheid system being perpetrated by the Israeli authorities against Palestinians on land which belongs to the Palestinians according to international law.

The West Bank is divided into Area A under nominal Palestinian control, Area B under joint Israeli and Palestinian control, and Area C (which comprises 60 percent of the occupied territory) under full Israeli control. The more than 300,000 Israeli settlers in this area have privileges denied to the local people.

“Palestinians face systematic discrimination merely because of their race, ethnicity, and national origin, depriving them of electricity, water, schools, and access to roads, while nearby Jewish settlers enjoy all of these state-provided benefits,” said Carroll Bogert, deputy executive director for external relations at Human Rights Watch.

“While Israeli settlements flourish, Palestinians under Israeli control live in a time warp – not just separate, not just unequal, but sometimes even pushed off their lands and out of their homes. By making their communities virtually uninhabitable, Israel’s discriminatory policies have frequently had the effect of forcing residents to leave their communities.”

HRW looked at both Area C and Israeli occupied East Jerusalem and found that the two-tier system in effect in both areas provides generous financial benefits and infrastructure support to promote life in Jewish settlements, while deliberately withholding basic services, punishing growth, and imposing harsh conditions on Palestinian communities.

Such different treatment on the basis of race, ethnicity, and national origin that is not narrowly tailored to legitimate goals violates the fundamental prohibition against discrimination under human rights law. (END)