Obama Visit Settles It a Little for Israel 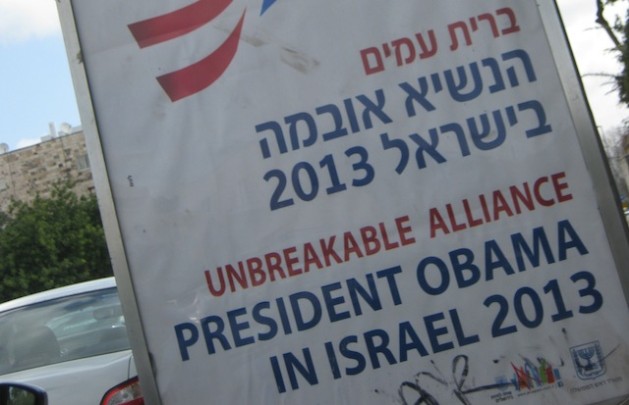 JERUSALEM, Mar 23 2013 (IPS) - On his visit to Israel and the Palestinian Territories, U.S. President Barack Obama laid out his vision for a revival of the long-stalled peace talks. Yet, it was clear from his statements that a settlement freeze is no longer an immediate requirement. And, he carefully avoided mentioning the pre-1967 lines as the basis for a two-state solution, to the Israeli Prime Minister’s delight.

Back in May 2011, on the eve of a meeting with Israeli Prime Minister Benjamin Netanyahu at the White House, Obama made a speech on the broader Middle East.

He then declared: “The borders of Israel and Palestine should be based on the 1967 lines with mutually agreed swaps so that secure and recognised borders are established for both states.” His call was a first for a sitting U.S. president, and a low-point in Israel-U.S. relations.

This week not a single time – neither in Jerusalem nor in Ramallah – did the U.S. President mention the June 4, 1967 ceasefire lines.

“How do we get sovereignty for the Palestinian people, and how do we assure security for the Israeli people? That’s the essence of this negotiation,” said Obama.

“That’s not to say settlements aren’t important. It’s to say that if we solve those two problems, the settlement problem will be solved,” he reasoned, next to a stone-faced Abbas. “So I don’t want to put the cart before the horse.”

“It’s not only our perception that settlements are illegal. Everybody considers settlements… more than a hurdle towards the two-state solution,” Abbas protested.

If that’s so, why such a turnabout in U.S. policy; why such realignment with the Israeli position?

After a ten-month settlement freeze in 2010; after barely three weeks of bilateral negotiations in September of that year; and three-and-a-half years of futile diplomacy nudging the parties to return to the negotiating table, Obama realised he “screwed up somehow” as he candidly said next to Netanyahu.

He now invokes political constraints and recalcitrant constituencies on both sides as impediments to a resumption of peace talks.

“Waiting and longing is the theme of our political agenda – longing for Palestinian unity; waiting for the new Israeli government’s directions,” says Mahdi Abdul Mahdi, founder of the Palestinian Academic Society for the Study of International Affairs (PASSIA).

“We’re only left with our narrative. That is why the PA is losing its credibility.”

The small opening in the Palestinian position could provide an opportunity for U.S. Secretary of State John Kerry, back on Saturday to Jerusalem and Ramallah, to discuss ways to translate the Obama vision into concrete steps for a resumption of negotiations.

For Abdul Hadi, renewed U.S. efforts at brokering talks reflect a tighter convergence of interests with Israel, a result of the two allies’ shared concerns with regard to the Arab Awakening.

“Obama’s visit here was to clarify the U.S. presence in the region and open a fresh chapter of support and enhancement in the strategic alliance with Israel under the new government,” says Abdul Mahdi.

Conscious that the sustainability of the new Netanyahu government depends largely on the Jewish Home party, Obama spoke over Netanyahu’s head. This party, if not opposed to talking with the Palestinians per se, rejects a two-state solution and advocates the annexation to Israel of 60 percent of the West Bank.

He reached out to Israeli university students; inspired them to reach out to their Palestinian neighbours; touched them on the immorality of the occupation – and received a standing ovation which Netanyahu would envy.

“Political leaders will never take risks if the people don’t push to take some risks. You must create the change that you want to see,” Obama urged.

Obama’s call was a first for a U.S. president, but that didn’t seem to trouble the Israeli leader.

Whether or not Obama is trying to ‘do a Cairo to him’, Netanyahu is counting on the fact that an awakening against the injustice of the occupation by the same young generation of Israelis who demanded social justice in the summer of 2011 is far from guaranteed.

“The speech is no problem for Netanyahu unless Israelis buy into its core premise – that if Israel only pushes harder for reconciliation, regional hostility to Israel will gradually melt. On that, as the elections proved in January, Israelis are thoroughly divided,” cautions David Horovitz, the Times of Israel website’s editor-in-chief.

Though Obama tactfully avoided demanding any tactical concession from Netanyahu, there’s little doubt as to what the fulfilment of the U.S. strategic goal entails – eventually, the settlements must stop; a Palestinian state must be created on the basis of the pre-1967 borders through negotiations.

But that’s not for the immediate future.

Meanwhile, so long as the borders of a future Palestinian state aren’t specified, and settlement expansion is not on the agenda, the Israeli Prime Minister has no reason to worry about the future of his new-born coalition, and can even afford to pledge Israel’s commitment to a two-state solution as he did during the presidential visit.