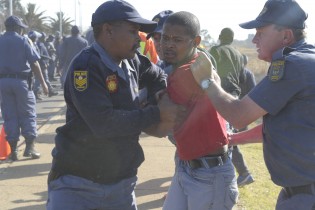 By Karlos Zurutuza
Car accident in Omar Mokhtar Avenue in downtown Tripoli. Nobody was injured but there’s a bumper hanging off the back of a car. In just a few seconds, a group gathers around.

Stopping Uranium to Fight Off Nuclear

By Pavol Stracansky
Local activists have begun protests in Slovakia after a government ministry appeared to give its backing to a controversial uranium mining project despite reassurances to people living near the proposed site that no mining would be allowed to take place.

By K. S. Harikrishnan
An indefinite struggle continues against the Kudankulam nuclear power plant in the southern Indian state Tamil Nadu despite a government crackdown on protests.

By Ranjit Devraj
When India was admitted to the world’s nuclear power industry nearly five years ago, many believed that this country had found a way to quickly wean itself away from dependence on coal and other fossil fuels that power its economic growth.

By Vesna Peric Zimonjic
A popular Serbian proverb quips that when it comes to politics there are as many opinions as there are people in this central European country of seven million.

By Claudia Ciobanu
Romanian President Traian Basescu is close to being impeached after the Parliament suspended him Friday. The political crisis, however, distracts from citizens’ calls for a more responsive political class and a halt to declining standards of living.