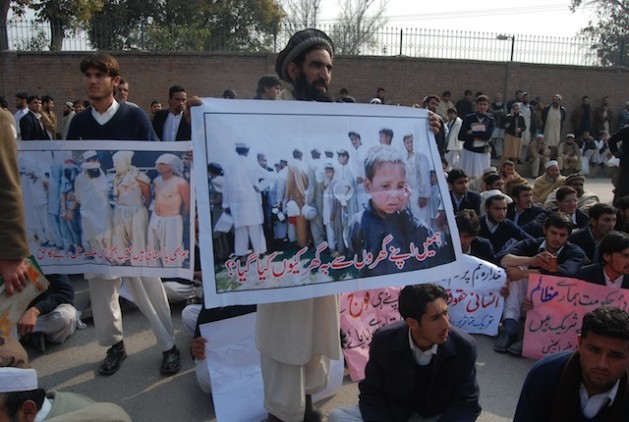 A protest in Peshawar against the killing of civilians by the army. Credit: Ashfaq Yusufzai/IPS.

PESHAWAR, Pakistan, Feb 2 2013 (IPS) - –“We demand an immediate end to the military operation in Khyber Agency because it has not brought any results during the past three years,” says Iqbal Afridi from the Pakistan Tehreek Insaf party. “The military operations are killing the local population while the militants remained unharmed.”

Afridi from the Khyber Agency unit of the party led by former cricketer Imran Khan spoke with IPS near the Governor’s House in Peshawar, the northern Pakistani city adjacent to the Khyber Agency region in the Federally Administered Tribal Areas (FATA). Party members had brought bodies of 18 local people reported killed by Pakistani security forces in nearby Alamgudar village.

Thousands of local tribal people, including students, civil society members and leaders of political parties joined the bereaved families in the protest against the army.

“The military operations have brought lives of the eight million population in FATA to a standstill,” Afridi said. “The seven tribal agencies have remained under curfew and the population has become completely idle.”

Juma Khan Afridi from the family of some of those killed told IPS what happened. “We were asleep when security forces scaled the walls of our home. They asked the women to get aside,” Khan Afridi, a student of the same family told IPS. He said he survived because he put on a veil and stood with women.

This is not the first time the army has killed innocent people in Khyber Agency, he said. “It is because of the growing anger that bereaved families brought the coffins of their dead relatives to protest.”

Wazir Muhammad, political analyst at the University of Peshawar, said people of FATA had been bearing the brunt of the U.S.-led war on terror for the past four years, but had remained silent due to fear of reprisals by the army.

The protest by Hazara communities in Quetta in Balochistan over their dead had given strength to local tribal people in FATA, he said. More than 100 people, including 83 Shias were killed in two bomb explosions in Quetta Jan. 11. The relatives there had refuse to bury their dead immediately in protest.

Only after braving three nights in Quetta’s freezing temperatures next to their slain loved ones did the families of the bombing victims end their protest and bury the bodies amid strict security measures in a Hazara graveyard. They did so after the government imposed governor’s rule in Balochistan.

“Anger is growing over the acts of terrorism everywhere in the country. The people are rightly protesting over the army’s killing of the innocent,” Muhammad said.

The Khyber Agency incident has opened a new chapter of protests against the army. “It is for the first time that people have chanted slogans against law enforcement agencies for their failure to provide protection. It will continue in the future if the army doesn’t mend its ways,” Umar Farooq, whose younger brother was among the dead, told IPS.

“It was not just the brutal killing – the army took away the slain bodies from the site of the protests and buried them on their own. Being Muslims, we wanted to give bath and have funerals before lowering them to the graves.”

The killings come after a dubious army record. In 2009 the Pakistan army, he said, was shown in a video to be shooting from close range at seven boys in Swat. The army had argued that they were Taliban but they looked innocent and juvenile, he said.

“The incident caused international outrage and the U.S. – the main sponsor of the Swat Operation – briefly withheld aid,” Farooq said.

In October 2010 the U.S. sanctioned six units of the Pakistani military operating in the Swat valley under the Leahy Law – which requires the U.S. State Department to certify that no military unit receiving U.S. aid is involved in gross human rights abuses. The law requires that when such abuses are found, they must be thoroughly investigated.

Despite pledges, Pakistan did not take any action to hold the perpetrators accountable as required under the law.

In several instances in Swat, Balochistan and the tribal areas, U.S. aid to Pakistan has continued in apparent contravention of the Leahy Law.

Human Right Watch said in its 2012 report that conditions had deteriorated markedly in the mineral-rich Balochistan, with disappearances of civilians, and an upsurge in killings of suspected Baloch militants and opposition activists by the military, intelligence agencies and the paramilitary Frontier Corps.

“The government appeared powerless to rein in the military’s abuses,” it said. Human Rights Watch recorded the killing of at least 200 Baloch nationalist activists in 2012.

In April 2010, the Pakistan army chief, Gen Ashfaq Kayani, apologised for the deaths of dozens of civilians during air raids near the Afghan border. The civilians were members of a pro-government tribe which had resisted Taliban influence.

On Jan. 17, shortly after the last killings, the army was severely criticised in Khyber Pakhtunkhwa assembly. Lawmaker Saqibullah Khan said such incidents were bound to create anger against the army among the people, and should immediately be stopped.

“The federal government should immediately stop military operations against militants as these have failed to establish peace. They have become the main source of creating problems for the civilians.”

Member of the National Assembly from the Awami National Party Bushra Gohar told IPS that the military campaigns have displaced 1.2 million people in FATA and had adversely affected the lives of tribal people. “Since 2005, we have started military operations in most of the seven tribal agencies of FATA, but militants are gaining strength while the poor people are suffering.

“We demand an end to the military operation in FATA,” she said. (End)