A Hundred Killed, A Community Cornered 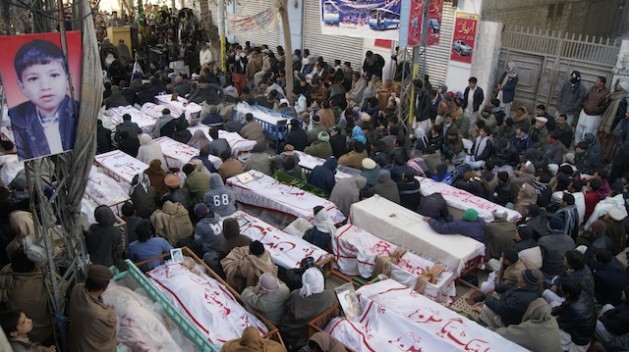 Jamali’s fiance Nadir Hussain, 24, a police officer who was on duty on the night of Jan. 10, was among those killed in blasts in Quetta in the Pakistani province Balochistan. More than 150 were injured.

The night after the killing Jamali sat in protest along with thousands of others – men, women and children – refusing to bury loved ones. “It was perhaps the longest night of my life; we braved the rain and the chilling wind in sub-zero temperature, sitting alongside the coffins,” she told IPS over phone from Quetta.

Most of the dead belonged to Pakistan’s minority Shia Hazara community, numbering less than 600,000 in a population of 180 million. The Sunni militant group Lashkar-e- Jhangvi (LeJ) with links to Tehrik-e-Taliban, and banned in 2001 by the Pakistan government, claimed it carried out the carnage.

A suicide bomber attacked a snooker club in the night on Alamdar Road, a Hazara dominated area. A car bomb detonated a few minutes later as rescuers and media arrived at the scene.

In a rerun of history, the Hazaras are being persecuted again, this time in Pakistan, because of their ethnicity and their history of conflict with Sunni Muslims.

Shias form 20 percent of Pakistan’s population of 180 million, and have regularly been attacked and with impunity by the LeJ. But their most common target are the Hazaras, who are easily recognisable by their Mongol-like features, as opposed to other Shias.

Most of the world’s eight to 10 million Hazaras live in Afghanistan. But some 120 years ago, many fled that country after being persecuted by the dominant Sunni Pashtun tribes. In Pakistan they were well received at first, and some rose to important positions in the government.

Over the years, with space for minorities increasingly shrinking, the more educated and affluent among the Hazara community fled to Europe and Australia. In the last decade or so, more than 25,000 Hazaras have fled from Pakistan.

These tragedies have taken a high toll on Hazara women. “In my lane where four other Hazara families live, mine is the only one which still has men. In all others men have either migrated or been killed,” Dawood Changezi, who runs a non-governmental organisation told IPS.

Taj Faiz, who runs Shohada Welfare Organisation, told IPS that of the 500 or so households that the charity is supporting, a majority are headed by women.

Another charitable organisation called the Nimso Foundation was set up in 2012. “Our main purpose is to ensure that the children of those who have been killed should not end education,” Prof Abdullah Mohammadi, the organisation president told IPS over phone from Quetta.

Jamali said her fiance was the lone breadwinner of his family because his father was sick. “I don’t know who will take care of them now; my father is not alive either and my brothers are much younger than me.”

Where men do head homes, they do not go to work. “The affluent people who had big businesses here have been forced to sell their property after they were threatened with kidnapping,” said Changezi.

Altaf Safdari, who runs a community television channel Mechid told IPS that most professionals belonging to his community have been ghettoised in the Alamdar Road and Hazara Town area of Quetta.

“For the last many months lawyers, doctors, professors, lecturers and even government servants cannot leave their homes for fear of being killed,” said Safdari. “As for government servants, for many their superiors have granted them long leave and they are being provided salary. The not-so-lucky ones who were posted outside the city have had to leave work.”

Rukhsana Ahmed, general secretary of the women’s wing of the ruling PPP, says that on visits to the city graveyard where her husband lies buried, a victim of ethnic killing in 2009, she sees “chadar-clad women sitting along the road, begging.” This, she says, is a new phenomenon because Hazaras never begged before, however destitute they may have been.

“The community pitches in, and there are homes to which people quietly send food rations. But the poverty levels have increased tremendously. I shudder to think what  a woman in desperation may have to resort to.

“The wife of a vegetable vendor who died leaving five young daughters now puts up a vegetable stall outside her home; the two wives of one man await government compensation a year after he died because the man’s body was found without a face. In scores of households there are eight to ten mouths to feed but with no breadwinner; and many young aspiring students have had to leave education half way,” she said.

Ahmed added: “After one college bus carrying Hazaras was attacked, many non-Hazara students refuse to sit with them any more, and many transporters refuse them a seat. A few young girls in my neighbourhood cover their faces with Balochi chadar, wear big sunglasses and use a three-wheeler to get to college for fear of being recognised as belonging to the community.”

“We want the army to take control of Quetta; we want a targeted military operation against the militants and we want the chief minister removed from whom we have no expectations,” said Abdul Khaliq, chairperson of the Hazara Democratic Party (HDP).

While not all their demands have been met, after three days of protest Pakistani Prime Minister Raja Pervez Ashraf dismissed the provincial government and imposed governor’s rule in Balochistan.

Changezi has meticulously been filing away press clippings of every attack on his community since the first in 1998. Since then, he says more than 800 people from his community have been killed in attacks.

“Since the attacks on Hazaras started two decades back, not a single person has been charged. The government and the army know quite well where the militants operate from and their hideouts; then why is it so difficult for them to catch them?” asked HDP’s Khaliq. (END)