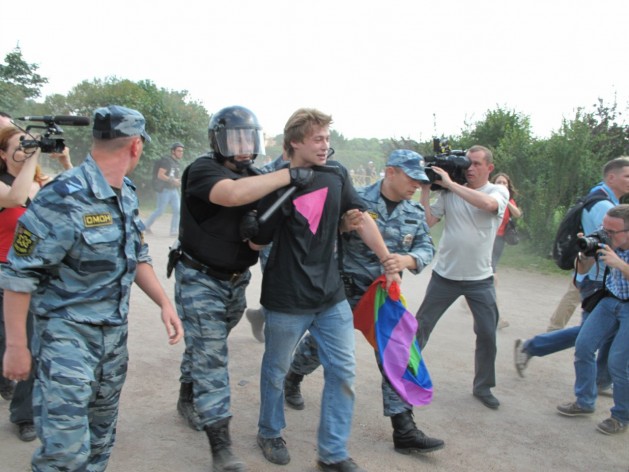 A protestor at an LGBT rights rally in St Petersburg is led away by police. Credit: Alliance of Heterosexuals for LGBT Equality.

MOSCOW, Mar 1 2014 (IPS) - Fears are growing in Russia that the Kremlin is preparing a crackdown on rights activists following the end of the Sochi Winter Olympics.

Activists warn that even under the glare of the world’s media, Russian authorities have shown they are happy to go on committing human rights abuses and muzzle any form of protest and, with the Games over, things could get much worse.

The harassment of ecological activists – which had garnered international attention during the Games – has shown no signs of letting up.

“The Kremlin is likely to tighten the screws and intensify repression against independent thinkers even further if, after the Games, Russia’s international partners turn their eyes away from the country,” Tanya Lokshina, Russia programme director at Human Rights Watch told IPS.

Moscow had been criticised by international organisations for its human rights record in the run up to the Games.

The adoption of controversial legislation on gay propaganda, a crackdown on third sector organisations, repression of political opponents and systematic harassment of activists, among others, were all cited as examples of Russian authorities’ disregard for rights.

Amid the growing criticism, amnesties and pardons were granted for prominent rights campaigners just months before the Games started in what was seen by many as a Kremlin PR exercise. And it was expected that during the Olympics, with Moscow looking to improve its world image, there would be little, if any, of the flagrant rights abuses perpetrated before the Games began.

But arrests of activists during the Olympics as well as the detention and public beating of recently amnestied members of the Pussy Riot punk group by Olympic security guards has sent a worrying signal, say activists.

“The authorities have shown no restraint in their clampdown on the freedoms of expression and assembly while the world’s eyes are on Russia. Given this, we can hardly expect improvement after, and we are concerned there will be more repressions against activists and general dissent after Sochi,” Denis Krivosheev, deputy director of the Europe and Central Asia Programme at Amnesty International told IPS.

“Unless legislation introduced in the past two years to limit the rights to freedom of expression, assembly and association is repealed, the message from the authorities is clear: they have armed themselves with tools to prevent people from exercising their rights. And it is not in their plans to do otherwise,” he added.

According to reports in local media, some NGOs have already contacted foreign diplomats in Russia expressing their concerns over a potential crackdown once the Games had finished.

These fears are being further fuelled by the mass anti-government protests and subsequent revolution in neighbouring Ukraine. Some analysts say Putin may look to stamp his authority by dealing harshly with anyone he sees as a threat and send out a strong signal that dissent will not be tolerated.

“Developments in Ukraine could well be used by ideologists in Russia promoting a crackdown to reassert themselves,” Lokshina told IPS.

The authorities’ hardline stance was already in evidence just a day after the Games ended. More than 200 peaceful protesters were arrested outside a Moscow court building where a group of protesters were handed jail sentences, some of up to four years, for their involvement in a 2012 protest on Bolotnaya Square in the capital.

The high-profile prosecution of the protestors was itself condemned by critics as unjust and politically motivated.

At the same time as the arrests it emerged that the harassment of ecological activists – which had garnered international attention during the Games – has shown no signs of letting up.

Two members of the Environmental Watch on North Caucasus (ENWC) NGO were detained as the Games came to a close.

Both say they were walking down the street in Sochi when officers stopped them and ordered them to go to a police station where they were charged with refusing to adhere to a police order.

One of them, David Khakim, was this week given a four-day jail sentence.

Members of the NGO, which was at the forefront of campaigning against environmental damage caused by the Games to the region around Sochi – part of a UNESCO World Heritage Area – have faced years of harassment for their work.

The group highlighted not just activities which have made life unbearable for some people in villages near the Games sites such as illegal dumping and water pollution, but also the destruction of thousands of hectares of rare forests, spawning sites for endangered fish, hibernation sites and migration routes for animals.

It also drew attention to how legislation had been passed and amended to allow for the construction of Olympics venues and related infrastructure in the Sochi national park – legislation which just last week the Russian branch of the WWF said would allow for the legal exploitation and degradation of the environment for years to come.

But the group’s work came at a price. Members of the group have repeatedly faced arrests, detentions, personal searches and police questioning.

Another ENWC activist, Evgeny Viteshko, was repeatedly arrested in the months before the Olympics, and during the Games was jailed for three years for violating a curfew imposed as part of a 2012 suspended sentence in connection with an environmental protest.

His arrest, trial and sentencing have caused outrage among rights groups and for some his case has become symbolic of the repression rights activists face in Russia.

The group was unavailable for comment but members had previously told IPS that they were not expecting any let up in harassment while they continued their activities.

With the post-Sochi outlook for rights groups in Russia looking grim, some campaigners say these Olympics will be remembered as much for what happened outside as inside the sporting venues.

“People will recall the Games as much for the host nation’s disregard for human rights as for the sporting action that took place during them,” Lokshina told IPS.