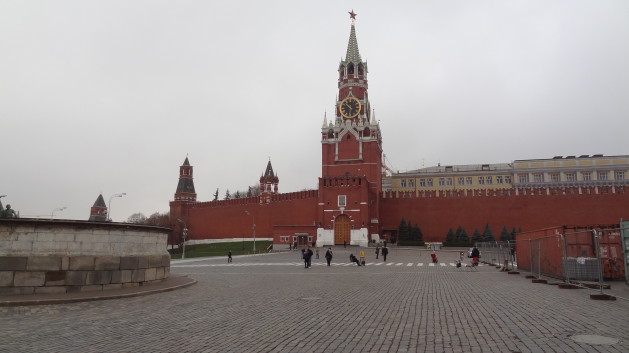 The Kremlin’s pardons have been seen as a public relations exercise ahead of the Winter Olympics. Credit: Pavol Stracansky/IPS.

MOSCOW, Dec 22 2013 (IPS) - An amnesty freeing high-profile detainees and convicts and the pardoning of arguably Russia’s most famous political prisoner have failed to move critics of the country’s appalling human rights record.

To mark the 20th anniversary of Russia’s constitution, lawmakers this week approved a wide-ranging amnesty for thousands of prisoners.

The amnesty applies to, among others, the Arctic 30 – the 30 Greenpeace protestors held for months after boarding a Russian oil rig on spurious charges of hooliganism – and two members of the Pussy Riot punk rock group serving a two-year jail sentence after performing a protest song against President Vladimir Putin in a Moscow cathedral.

In Russia itself some local media and analysts have linked the Games to the amnesty and Khodorkovsky’s pardon.

And on Thursday President Putin made a shock announcement that he would soon be pardoning Mikhail Khodorkovsky, the former oil baron who has spent more than ten years in jail after what critics say was a politically motivated judicial process which saw him tried twice for economic crimes.

But the wave of judicial clemency is no sign of an impending improvement in the country’s poor human rights record, say critics.

Since Vladimir Putin’s return to the presidency last year, international and local organisations say there has been an unprecedented crackdown on rights and freedoms, some of which has prompted outrage among the international community.

Recent legislation forcing foreign-linked NGOs to declare themselves ‘foreign agents’ or face effective closure and possible criminal prosecution and a law banning the promotion of homosexuality have attracted the ire of both foreign governments and international rights groups.

The arrests of the Arctic 30 were met with widespread outrage and the jailing of Pussy Riot members Nadezhda Tolokonnikova and Maria Alyokhina – both young mothers – has been repeatedly condemned by the international community.

Meanwhile, the continued incarceration of Khodorkovsky met with continued calls from international rights to have him freed and remained a prominent blot on Russia’s already poor rights record, serving as a reminder of the regime’s treatment of political opponents and what can happen to people who do not toe the Kremlin’s line.

These and other rights abuses have come increasingly into focus as the country prepares to stage the Winter Olympics in February.

Heads of state from a number of Western nations have already said they will not be attending the Games in the Black Sea resort of Sochi. While not all have said so directly, their non-attendance has been seen as a protest over the apparent active suppression of human rights in the country.

The release of the Arctic 30 and Tolokonnikova and Alyokhina under the amnesty has suggested to some that the move has more to do with creating good PR for President Putin’s regime ahead of the Olympics than a sudden Kremlin u-turn on rights.

“While it is not for us to say what exactly motivated the Russian authorities to adopt this amnesty law, it would indeed appear not unrelated to the growing criticism ahead of the Games.”

In Russia itself some local media and analysts have linked the Games to the amnesty and Khodorkovsky’s pardon.

Under the headline ‘Mikhail Khodorkovsky got an Olympic ticket’, political analyst for news website RBCDaily.ru, Lilit Gevorgian, said: “The pardon for Khodorkovsky is in conjunction with the amnesty. Together with financial assistance to Ukraine, this has a positive impact on Russia’s image.

“This is especially important on the eve of the Winter Olympics in Sochi in which Russia invested a lot of money.”

President Putin has denied any ulterior motive to the amnesty. Speaking at an annual press conference in Moscow on Dec. 19 he said that the arrests of the Greenpeace protestors should “serve as a warning” to anyone else attempting similar action and emphasised the amnesty was “not a revision of the court decision” to jail the Pussy Riot members.

He also made clear that his pardon of Khodorkovsky would be on compassionate grounds.

Activists say the amnesty and pardons are not enough though. Lydia Aroyo, press officer for Europe and Central Asia at Amnesty International, told IPS: “Khodorkovsky’s potential pardon is not the same as releasing him unconditionally. The charges are not written off. It does not put straight the record – Khodorkovsky’s trial was politically motivated and unfair.”

And Ben Ayliffe, head of Greenpeace’s Arctic oil campaign, told IPS: “While there is relief that the Arctic 30 are being freed we are not popping open the champagne corks in celebration. They should never have been arrested and detained in the first place. The charges against them were a fantasy.”

Even with the amnesty and apparent Khodorkovsky pardon, there are no signs that the Kremlin crackdown on NGOs and activists is going to ease up.

Just this week the promiment St. Petersburg-based anti-racism group Anti-Discrimination Centre Memorial was told by a court that it had to register as a foreign agent.

Meanwhile, activists promoting minority rights in the Krasnodar region, where Sochi is located had their homes searched and computers and mobile phones taken from them by police. Some of them had spoken out about abuses connected to the Games.

Also, many of the Bolotnaya 27 – arrested after street protests last year against President Putin on Bolotnaya Square in Moscow and now facing 13 years in jail for mass rioting and violence against public officials despite little evidence against them – remain behind bars as their trials continue.

The detention of the Bolotnaya protestors in particular is symptomatic of Russian authorities’ approach to human rights, say activists.

Amnesty’s Krivosheev told IPS: “The failure to immediately and unconditionally release them, along with other prisoners of conscience, signifies the authorities’ continuing disregard for basic human rights.”