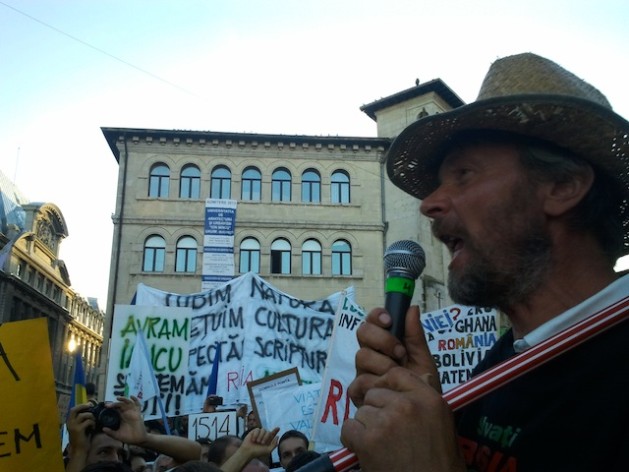 BUCHAREST, Sep 17 2013 (IPS) - Street protests are snowballing in Romania against a Canadian-led gold mining project in the Rosia Montana area in the Apuseni Mountains. More than 20,000 people joined a protest march in Bucharest on Sunday, and thousands in other Romanian cities took to the streets.

The Sunday marches represent the third major countrywide weekend mobilisation to oppose the project since Sep. 1. They drew the biggest numbers of participants so far. Smaller numbers of people have been protesting daily in Bucharest, in the western city of Cluj, and in others cities.

The protests erupted after the Romanian government proposed a draft law Aug. 27 that gives extraordinary powers to the project promoter, Rosia Montana Gold Corporation (in which Canadian group Gabriel Resources is the majority stakeholder).

“It is also about the right of people to keep their properties, about our duty to safeguard a patrimony that belongs not only to us, but also to the world and to future generations." -- Claudiu Craciun, an active participant in the protests

According to the text, the company can relocate people whose homes are on the perimeter of the mine. Additionally, the law asks state authorities to grant the company all necessary permits within set deadlines regardless of national legislation, court rulings or public participation requirements.

Gold Corporation plans to build Europe’s largest gold mine at Rosia Montana to extract 300 tonnes of gold and 1,600 tonnes of silver over 17 years. The operation would involve the destruction of three villages and four mountains.

In all, 12,000 tonnes of cyanide would be used yearly and 13 million tons of mining waste produced each year, according to a project presentation submitted by the company to the Ministry of Environment.

The proposed law is meant to give the project a definitive green light after over 14 years in which Gold Corporation has not been able to secure all necessary permits.

In 2004, the Romanian Academy of Science – the most authoritative scientific body in the country – called for the project to be scrapped because environmental and social costs far outweigh benefits. Apart from environmental risks and displacements, the large-scale mining proposed by Gold Corporation would threaten the cultural heritage in Rosia Montana, a mining area since Roman times.

Hundreds of people in the 3,000-strong village have been opposing the project for years, setting up the NGO Alburnus Maior and successfully battling the corporation and state authorities in courts.

Contributing to the growth in public sympathy for the movement has been the seemingly close alliance between Gold Corporation, politicians across the political spectrum and mainstream media.

Political arch-rivals, such as centre-right President Traian Basescu and Socialist Prime Minister Victor Ponta, have at various points declared themselves in favour of the project.

Most major media outlets in the country have run Gold Corporation advertisements while failing to cover arguments against the exploitation. In a country where corruption is a big feature of public life, this consensus in favour of gold mining at Rosia reeked of backroom deals.

The predominant discourse about Rosia Montana in the public sphere has been that gold mining would create employment and enrich state coffers. According to the most recent agreement between the Romanian government and the company (annexed to the Aug. 27 draft law), Gold Corporation would employ 2,300 people during the two-year construction phase and 900 during the 17 years of exploitation. Over the duration of the operation, the Romanian budget is set to win 2.3 billion dollars while other benefits for the Romanian economy are estimated at 2.9 billion dollars.

The popular mobilisation now targets the Parliament, whose vote will effectively decide the fate of Rosia Montana. If the law is approved, even if it is challenged as unconstitutional in the Constitutional Court (the premises for such a procedure exist since a judicial committee in the Senate issued a negative opinion on the draft law), construction could begin immediately, pending the supreme court ruling.

“We cannot tell what will happen with this project, but all that we can say is that we keep fighting, that united we will save Rosia Montana,” Eugen David, leader of Alburnus Maior told IPS. “We are under siege right now in Rosia Montana, but in the end we will manage to lift it.”

The protests that began on Sep. 1 are remarkably strong for Romania. Since their start, misinformation in the public space has been abundant: the main television channels originally failed to cover the protests despite their size; on Sep. 10, media wrongly announced that the draft law had been rejected by the Senate; and Ponta declared that the project could not go ahead against popular will, only to later express again support for the project.

In spite of this, protesters – who function according to a non-hierarchical structure and have no official leaders – have skillfully kept the public informed and engaged via Facebook. The weekly hours-long marches go through neighbourhoods with the goal of spreading the word about opposition to the project and showing that protesters are not hooligans as depicted on TV.

Their strategy seems to have worked since numbers this Sunday were bigger than ever. The first days of mobilisation brought mostly youth to the streets, but older participants and youth-parent couples are increasingly visible. After two weeks of well-mannered street actions, police presence on Sunday can be considered symbolic.

“It is very interesting that such a revolt began with a case of protecting the environment, but this is not only about the environment,” Claudiu Craciun, an active participant in the protests, told IPS. “It is also about the right of people to keep their properties, about our duty to safeguard a patrimony that belongs not only to us, but also to the world and to future generations.

“The Rosia Montana case – in which you see legislation custom made to serve the interests of a corporation – highlights some failures of both democratic institutions and of the economic system, capitalism in a broader sense,” Craciun added.

“Rosia Montana is the battle of the present and of the next decades,” the activist said. “It illustrates the end of post-1989 cleavages [communist vs anti-communist, European vs. non-European] and the emergence of new ones. People today confront a corrupted political class backed up by a corporation and a sold out media; and they ask for an improved democratic process, for adding a participatory democracy dimension to traditional democratic mechanisms.”