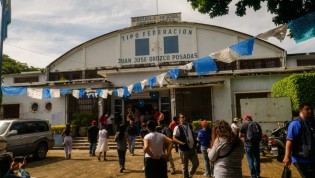 By Carey L. Biron
A multilateral arbitration panel here began final hearings Monday in a contentious and long-running dispute between an international mining company and the government of El Salvador.

By Asel Kalybekova
A generation after independence from the Soviet Union, most villages in Kyrgyzstan are ramshackle, broken places, scenes of hopelessness and despair. Able young people leave – for Bishkek, the capital, or for menial jobs in Russia. But thanks to a secret gold mine, one little mountain hamlet is different.

By Jane Regan
Outraged that they have not been consulted, this week Haitian senators called for a moratorium on all activities connected with recently granted gold and copper mining permits.

By Bert Wilkinson
As regional delegates meet to discuss a legally binding ban on the use of mercury this week, Guyanese officials are arguing that an exception should be made for the South American country's lucrative gold mining sector until an acceptable alternative is found.
Next Page »
ADVERTISEMENT ADVERTISEMENT