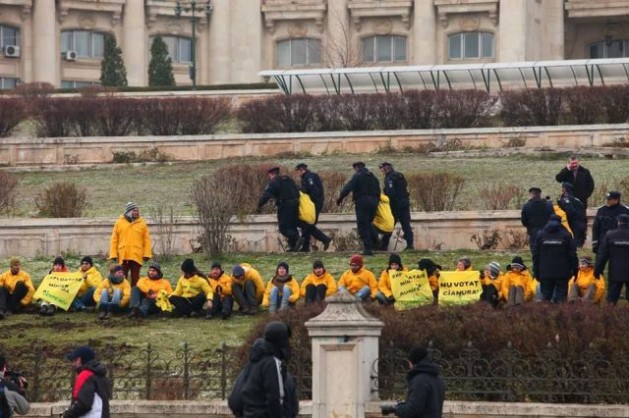 Fifty Greenpeace activists were arrested on Dec. 9 during a symbolic action of "digging for gold" in front of the Romanian parliament. Credit: Courtesy of Greenpeace Romania

BUCHAREST, Dec 10 2013 (IPS) - Authorities in Romania have been attempting to bulldoze through public opposition to push through controversial extractive projects such as gold mining at Rosia Montana and shale gas drilling at Pungesti.

However, amendments to the national mining law, which would have given Rosia Montana Gold Corporation extraordinary powers to implement its project to build Europe’s biggest gold mine in the Apuseni mountains, failed to be passed by the Romanian parliament Dec. 10 mainly because of a lack of quorum.

Tuesday’s vote was part of a long-term strategy by the Romanian government to give the project a green light despite public opposition and legal objections.

While the parliament voted, hundreds of protesters occupied the headquarters of the ombudsman in Bucharest and camped outside the offices of political parties in the western city of Cluj.

If the law had been adopted, projects involving the extraction and processing of mineral resources could have been declared “of exceptional public interest” allowing project promoters to receive extraordinary powers, such as the right to conduct expropriations, skip permitting procedures for working on archaeological sites, and be reissued permits within 60 days if they were cancelled by courts.

The new law represented a means for the authorities to push the Rosia Montana project – and potentially others like it – in a less than transparent manner after a previous attempt to give special powers to Gold Corporation had been dropped due to public pressure.

The draft law sparked massive protests in Romania starting Sept. 1, with tens of thousands taking to the streets for weeks in a row across the country.

Faced with such discontent, the special parliamentary commission analysing the Rosia Montana law rejected the text in November, arguing that the project would be illegal on multiple counts.

In appearance, the decision by the special commission meant the project had been rejected.

Yet as the commission announced its conclusions, the Romanian parliament – dominated by Ponta’s party – was preparing amendments to the mining law which meant potentially giving all mining companies the same controversial extraordinary powers intended to be granted to Gold Corporation.

The political bet was that the amended mining law would be passed under the radar, as the text did not single out Rosia Montana and some of the public thought the project dead with the rejection of the first law.

It was only on Monday Dec. 9 that the public learned that the mining law would be voted on by parliament the next day. The full text of the new law was not available to the public at the time of the Tuesday Dec. 10 vote.

On Monday, the mining law was debated by parliamentary commissions. According to Stefania Simion, a lawyer who has been working for years on the Rosia Montana case and who observed the proceedings, most of the parliamentarians did not have a chance to study the amendments and there was virtually no debate.

In the Rosia Montana case, Romanian authorities are using secrecy and legal artifice to try to push through a project facing significant public opposition.

In the case of drilling for shale gas at Pungesti, in the eastern county of Vaslui, they are relying instead on policing.

During the months of battle over Rosia Montana, at the other end of the country a new campaign was born: in October, as U.S. energy giant Chevron was preparing to start exploratory works for shale gas in Pungesti, locals mobilised to stop the company’s operations. They set up a camp next to the land where Chevron was preparing to install exploratory drills and tried to block access by machinery to the site.

The villagers, mostly farmers, were worried about the impacts that fracking – hydraulic fracturing, the technique used to extract natural gas from shale – on a perimeter inside their village could have on their lands and water. Some told the Romanian media they had seen movies about the negative effects of fracking in U.S. communities.

Opposition to shale gas exploration – albeit not massive – has grown gradually in Romania over the past two years as successive governments gave exploration permits to several companies; rejecting fracking was one of the themes brought up by protesters during the January 2012 anti-austerity protests and this year’s Rosia Montana demonstrations.

When locals in Pungesti started protesting against Chevron in October, anti-Rosia Montana activists were already mobilised in major cities and ready to offer some support.

The villagers’ attempts to block Chevron operations and the police response were broadcast live on the internet from the early days. The national media also reported on Pungesti, after being criticised for failing to properly cover the anti-Rosia Montana mobilisation.

In their turn having learned from the Rosia Montana case, Romanian authorities responded decisively from the start to prevent the opposition from escalating. For weeks now, the hundreds of villagers protesting at Pungesti are outnumbered by military police deployed on the ground. Tens of people have been arrested. Protesters complain of police brutality and systematic harassment.

“As I camped at Pungesti last Friday, I saw the police attacking people, I witnessed at least four people who had to be saved by the crowds from police abuse,” retired engineer Gherghina Vladescu told IPS.

Responding to the accusations of police brutality in Pungesti, Romania’s minister of interior, Radu Stroe, told the national media Dec. 8: “Others were violent too, they broke down fences…Everyone is free to protest in this country as long as they do it peacefully.”

The minister was referring to the protesters’ tearing down Dec. 7 of a wire fence protecting the area for which Chevron was granted the exploration permit.

In November, villagers from Pungesti submitted an official complaint to the National Anti-Corruption Agency in which they accuse the mayor of Pungesti, who leased land to Chevron, of obtaining property rights over it through an illegal land exchange.

Since protests began at Pungesti, Chevron has suspended operations repeatedly saying that it “is committed to having constructive and positive relations with communities where it conducts operations”. Each time, it resumed works; this month, it filed criminal complaints against villagers for destruction of property.

On Dec. 8., Romanian authorities declared Pungesti “a special public safety zone”. This was needed to justify the ongoing police practices of checking all cars coming into Pungesti, keeping guard outside homes, ID-ing people at will and removing protesters from the site.

Claudiu Craciun, one of the prominent figures in the Rosia Montana and shale gas protest movements, said the situation in Pungesti brought to mind a dystopian future: “Imagine for a second a country where hundreds of industrial perimeters are permanently guarded by tens of thousands of police and private contractors.”

Resistance will continue, he said, adding, “The more the government tries to appear in charge of things, the weaker it is. Legitimacy and the use of force are in an inverse proportionality relation to one another.”