BUCHAREST, Jul 16 2010 (IPS) - Canadian company Gabriel Resources has managed to resurrect a cyanide-based gold exploitation project which had been declared illegal in courts, and is opposed by most Romanians. 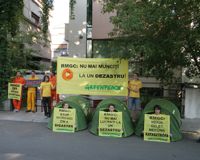 The gold exploitation planned by the Canadian company in Rosia Montana (Alba county, northwest Romania) is set to be the largest in Europe. Three hundred tons of gold and 1,400 tons of silver are to be extracted over 16 years from four quarries in Apuseni Mountains.

Toronto-registered Gabriel Resources owns 80 percent of the stakes in Rosia Montana Gold Corporation (RMGC, the entity set up to build and run the operation), while Romanian state-owned Minvest Deva has most of the remaining shares.

With the price of gold more than doubling since the project was planned, profits from the exploitation are set to be huge. Over the past couple of years, RMGC has been claiming that the Romanian state alone would gain between 2 and 4 billion dollars from this project.

The project has been opposed since 2002 by locals and activists across the country. The Save Rosia Montana campaign has grown into the strongest civic movement in contemporary Romania.

The project would involve the resettlement of all villagers from Rosia Montana (situated between the quarries) and relocating churches and cemeteries. Even though RMGC has bought close to 80 percent of the property in Rosia Montana village, the remaining villagers are determined not to sell their lands.

The gravest concern is over the extraction technology: gold is to be separated using sodium cyanide, a highly toxic substance. According to the group Romania Without Cyanides, over 10 million kilograms of sodium cyanide are to be used yearly. A study of the Romanian Academy (the largest academic body in the country made up of scientists from all fields) shows that further dangers exist: heavy metals resulted and sulfur dioxide used in the process could severely pollute the surrounding lands and waters.

The Academy advises against the RMGC project, quoting previous disastrous cyanide spills at other exploitations, one of which took place in 2000 in Romanian county Baia Mare.

According to RMGC, however, “the project will stop pollution and protect the environment.” The company claims it will clear the existing pollution (there has been mining in the area since Roman times) and clean up everything once they finish extraction: the company website shows pictures of green pastures with animals grazing, indicating these would replace the exploitation 25 years after the start of the project.

The company also says the project would create over 3,000 jobs in an area with high unemployment rates.

But these claims have not persuaded opponents of the project. According to a poll conducted in 2007 by the Romanian Chamber of Deputies, 95 percent of respondents said they did not want the gold mine to open. Figures provided by environmental group Greenpeace indicate 80 percent of Romanians oppose the project.

Villagers remaining in Rosia Montana are arguing that the area could be developed for tourism as it hosts valuable archeological sites dating back to Roman times and is surrounded by beautiful forests. They argue employment generated by the RMGC project would be temporary while the environmental damage and displacement of people, permanent.

A year back, the opposition seemed to have won. The project was blocked by court decisions suspending the urban plans submitted by RMGC. The Ministry of Environment also suspended the procedure of granting authorisation for construction.

In May this year, a resolution voted by the European Parliament gave further hope to Romanian activists: the European Parliament asked for the complete banning of cyanide-based mining across the continent. The parliament pointed out that cyanide is a highly toxic chemical qualifying as a main pollutant under the EU Water Framework Directive and that “cyanide mining provides few jobs, and only for a period of eight-16 years, while it runs the risk of causing enormous cross-border damage, the cost of which is usually not met by the responsible operating companies.”

RMGC has already invested 300 million dollars in Romania, according to its executive director, Dragos Tanase. It appealed all court decisions against it and submitted three new versions of the urban plan.

The company’s increased confidence was obvious during a conference it organised in early July in Bucharest. There, private experts hired by RMGC explained that the project could bring Romania 19 billion dollars in direct and indirect revenues — four times the amount previously announced by the company.

While opponents of the project held hope for the EU ban, the European Commission has refused to endorse the European Parliament resolution, with Environment Commissioner Janez Potocnik saying Jun. 23 that a total ban would be “detrimental to employment without additional environmental and health added value.”

“While the resolution of the European Parliament is an important political decision, the reaction of the Commission is decisive,” Franziska Keller, a Green MEP from Germany told IPS. “Mr. Potocnik’s reaction is short-sighted and not in line with his commitment to resource efficiency. He has opted for the destructive path of primary mining of gold instead of leading the way to a far more environmentally friendly — and most likely more job intensive — recycling society.”