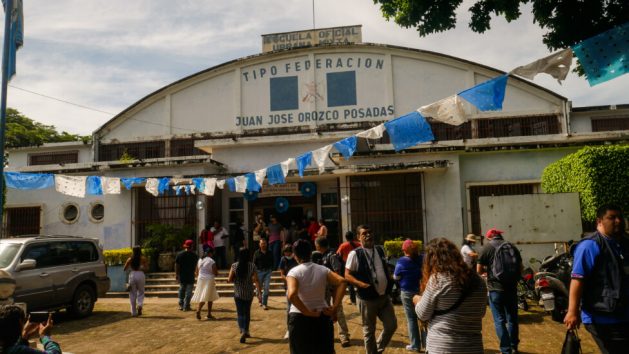 One of the voting centers of the popular consultation held on Sunday, Sept. 18 in Asunción Mita, a town of 50,000 people in eastern Guatemala. The majority of the people who voted said no to the Cerro Blanco mine, due to its environmental impacts. CREDIt: Edgardo Ayala/IPS

ASUNCIÓN MITA, Guatemala , Sep 21 2022 (IPS) - The majority of the Guatemalan population continues to oppose mining and other extractive projects, in the midst of a scenario of socio-environmental conflict that pits communities defending their natural resources against the interests of multinational corporations.

The most recent rejection of mining projects in this Central American country took place on Sunday Sept. 18 in the town of Asunción Mita, 350 kilometers southeast of the capital of Guatemala, in the department of Jutiapa.

The “No” vote wins

Here, through a citizen consultation, 88 percent of the more than 8,503 people who voted said “no” to the operations of the Cerro Blanco gold mine, owned by Elevar Resources, a subsidiary of Canada’s Bluestone Resources.

“In my view we can’t allow this to go ahead, we are getting older, but we don’t want the children and young people to suffer from the environmental impact of the mine,” said Petronila Hernández, 55, after voting at a school on the outskirts of Asunción Mita.

Hernández added to IPS that “we don’t agree with the mine, it affects our water sources, we carry the water from the water source, and the mine contaminates it.”

Hernández was accompanied by her daughter, Marilexis Ramos, 21.

“Hopefully our ‘No’ vote will win,” said Ramos during the voting. At the end of the afternoon the counting of votes began, and by Monday Sept. 19 the results began to be clear.

Mother and daughter live in the Cerro Liso hamlet, on the outskirts of Asunción Mita, very close to the mine. 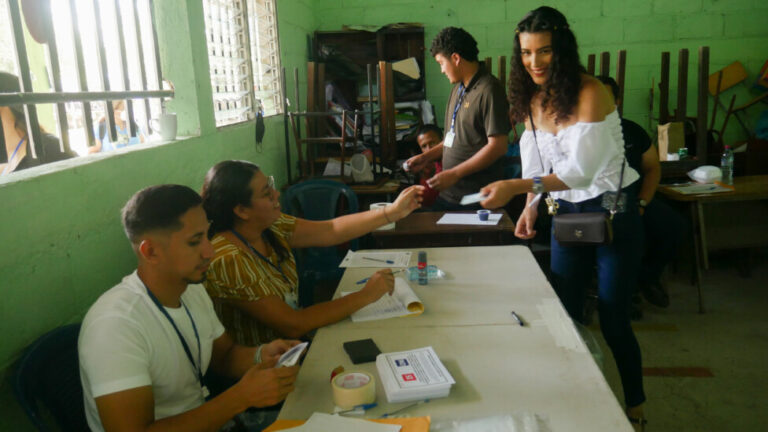 Marilexis Ramos (r), 21, voted on the continuity of the Cerro Blanco mining project, located near Asunción Mita, 350 kilometers southeast of the Guatemalan capital, in the department of Jutiapa. A full 88 percent of the more than 8,503 people who voted said “no” to the gold and silver mine. CREDIT: Edgardo Ayala/IPS

The Cerro Blanco underground mine was licensed to operate in 2007 for a period of 25 years, but since then it has not been able to extract gold and silver, due to unforeseen issues.

The project encountered thermal water veins in the subsoil that released heat that made it impossible to work for long enough inside the two tunnels built in the mine, activist Juan Carlos Estrada, of the Water and Sanitation Network of Guatemala, told IPS.

“The mine has been stranded for almost 15 years without extracting a single ounce of ore,” Estrada said.

However, the community struggle continues because, despite the setback it suffered in Sunday’s vote, the company still intends to operate the mine and to do so it aims to modify the original plan and turn it into an open pit mine.

Guatemala, a nation of 17.4 million inhabitants, has experienced socio-environmental conflicts in recent decades as a result of the communities’ defense of their territories against the advance of mining and hydroelectric projects and other extractivist activities.

Many of the conflicts have taken place in the territories of indigenous peoples, who make up 60 percent of the total population. Members of affected communities have put up resistance and have faced crackdowns by police and soldiers.

This has earned them persecution and criminalization by the authorities. 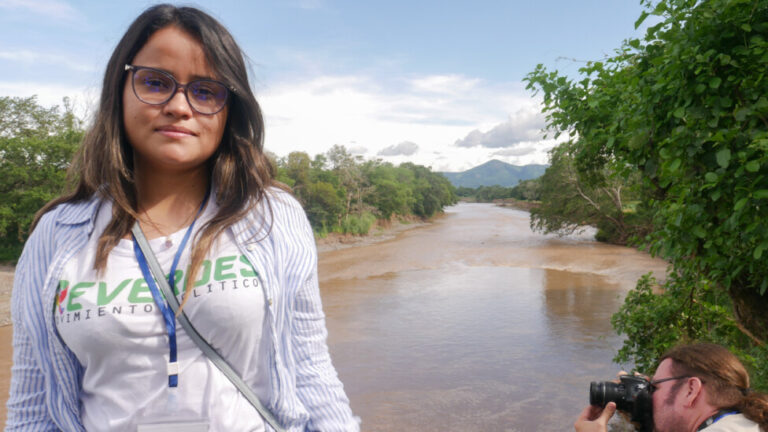 Dalia González, of the Salvadoran movement Green Rebellion, on the banks of the Ostúa River in eastern Guatemala, talks about the impact that pollution from the Cerro Blanco mine will have on the river, which in turn will end up polluting the Lempa River in El Salvador. CREDIT: Edgardo Ayala/IPS

In February, IPS reported on the struggle of indigenous Maya Q’eqchi’ communities in the municipality of El Estor, on the outskirts of Lake Izabal, in the department of the same name in eastern Guatemala.

The only active mine in Guatemala operates there, as similar projects have been blocked by the communities through citizen consultations or by court rulings, after the communities requested injunctions complaining about the lack of such votes, which are required.

The nickel mine in El Estor has been operated since 2011 by the transnational Solway Investment Group, headquartered in Switzerland, after purchasing it from Canada’s HudBay Minerals.

“Almost 100 consultations have been held, in 100 municipalities around the country, and in all of them mining and hydroelectric projects, mainly, have been rejected,” said José Cruz, of the environmental collective Madreselva.

The high number of consultations expresses the level of struggle of the population and the companies’ interest in the country’s natural resources.

“The only mining project currently operating is El Estor,” Cruz told IPS. And it is still active thanks to a “mock” consultation, manipulated by the company, which apparently endorsed the mine.

The Oxec I and Oxec II hydroelectric projects have also been a source of socio-environmental conflict.

The first plant began operations in 2015 and the second has been under construction since two years later. Both are owned by the Energy Resources Capital Corporation, registered in Panama.

In 2015, local Q’eqchi indigenous communities launched a struggle against the two hydroelectric power plants on the Cahabón River, located in the municipality of Santa María de Cahabón, in the department of Alta Verapaz in northern Guatemala.

After suffering persecution for his active participation in defense of his people’s territories, Q’eqchi leader Bernardo Caal was imprisoned in January 2018 and sentenced the following November to seven years in prison by a court “without any evidence,” as denounced at the time by Amnesty International, which considered him a prisoner of conscience.

However, he was released in March 2022 for good behavior and because there was essentially no evidence against him. 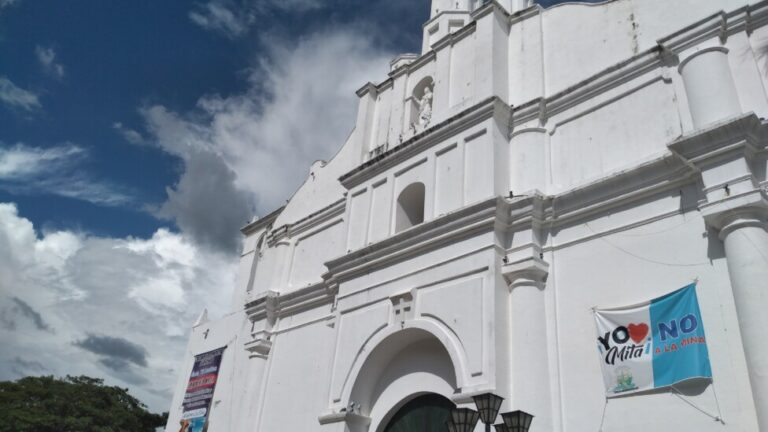 An anti-mining banner hangs on the façade of the church in Asunción Mita, in eastern Guatemala. The company operating the Cerro Blanco mine called the consultation process held in the town on Sept. 18 illegal. CREDIT: Edgardo Ayala/IPS

Projects that pollute across borders

Although the victory of the “no” vote in Asunción Mita represents an achievement for local residents, the project still presents a pollution risk, not only for this town of 50,000 people, but also for neighboring El Salvador.

Asunción Mita is located near the border with El Salvador.

Environmental organizations in Guatemala, Honduras and El Salvador have warned that heavy metal pollution from the mine would end up impacting the Ostúa River on the Guatemalan side.

The waters of that river, in turn, would reach Lake Guija, on the Salvadoran side. And a segment of that lake is reached by the Lempa River, which provides water to more than one million people in San Salvador and neighboring municipalities.

The Lempa River is 422 kilometers long and its basin covers three countries: It originates in Guatemala, crosses a small portion of Honduras and then zigzags through El Salvador until flowing into the Pacific Ocean.

El Salvador passed a law in March 2017 prohibiting mining, underground or open pit, but the proximity to the Cerro Blanco mine makes it vulnerable to pollution.

“We are concerned, our main source of water is under threat,” Salvadoran activist Dalia González, of the Green Rebellion movement, told IPS.

González added that the governments of Guatemala and El Salvador have an important role to play in protecting natural resources and the health of the local population.

“Because the effects of the mines cross borders,” said the young activist on the banks of the Ostúa River, where she had arrived along with Salvadoran environmentalists and journalists after witnessing the consultation process.

González called on Salvadoran President Nayib Bukele to engage in a dialogue with his Guatemalan counterpart Alejandro Giammattei to find a solution to the problem of pollution that would also affect El Salvador.

“The situation is serious and requires urgent action,” said the Salvadoran activist.

After learning the results of the citizen consultation in Asunción Mita, the company behind the Cerro Blanco mine, Elevar Resources, called the process illegal, according to a press release made public on Monday Sept. 19.

The company’s managing director, Bob Gil, said, “this consultation process is clearly illegal and full of irregularities,” according to the statement.

In the company’s view, the process was flawed by what it called “anti-mining groups”.

“We are disappointed with the actions of these groups who use biased referendums to create doubt and uncertainty regarding responsible mining projects such as Cerro Blanco,” he added.

The consortium said the aim is to continue developing the project and to produce 2.6 million ounces of gold during the life of the mine.

Due to the problems it has had with the tunnels and the heat that prevents it from working and extracting the minerals, in November 2021 the company submitted a request to the authorities to transform the current underground mine into an open-pit mine.

The company “spoke of updating the Environmental Impact Study, but what was needed was a new study, because it was a completely different project,” said Madreselva’s Cruz.