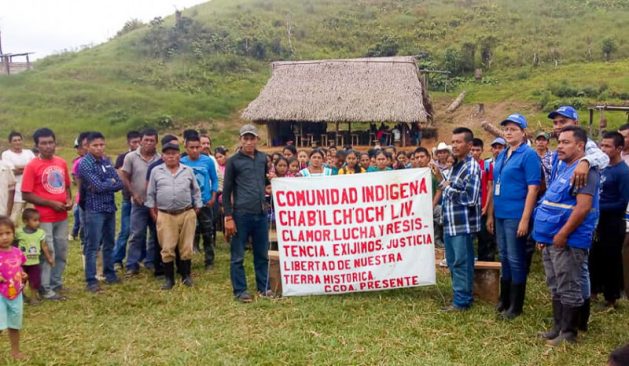 Mayan indigenous communities in eastern Guatemala are waging an ongoing struggle for the defense of their lands and resources, in the face of encroachment by mining, power and oil corporations. These struggles have resulted in protests on behalf of the affected communities and against the Guatemalan government's repression of activists and indigenous inhabitants, and have now reached the Inter-American Court of Human Rights. CREDIT: Courtesy of Raúl Ico Pacham/FB

SAN SALVADOR, Feb 21 2022 (IPS) - A struggle for the defense of their territories waged by indigenous Maya Q’eqchi’ communities in eastern Guatemala could set a historic precedent for Latin America’s native peoples because it would ensure not only their right to control their lands but also their natural resources, denied for centuries.

This could happen if the Inter-American Court of Human Rights based in San José, Costa Rica rules in favor of these communities involved in litigation for the defense of their ancestral territories and for control over their own future and development.

The struggle is against a nickel mine operated since 2011 by the Switzerland-based transnational Solway Investment Group on lands in Guatemala that these communities consider their own, in the municipality of El Estor near Lake Izabal, in the department of the same name in eastern Guatemala.

"We hope it will be a historic decision, that the Court can decide for the first time on the permanent sovereignty of indigenous peoples over their natural resources.” -- Leonardo Crippa

The mine is a private venture over which the local indigenous communities had no say. Furthermore, they argue that there is evidence that it is contaminating the area’s natural resources, lawyers and activists told IPS.

The mine “pollutes the rivers, destroys the hills, without regard for the lives of the people in the municipality,” said activist Abelino Chub of the Maíz de Vida Association, in an interview with IPS from El Estor.

Chub, of the Mayan Q’eqchi indigenous people, lives in El Estor and has worked for years in defense of indigenous territories in Izabal, in the face of inroads made by international consortiums in the production of nickel, bananas, electricity and oil, he said.

Because of his involvement in that struggle he was arrested and imprisoned in February 2017, as part of a pattern of persecution that other people who have fought against the transnationals have also experienced firsthand.

Solway Investment has been operating the mine since 2011, after purchasing it from the Canadian corporation Hudbay Minerals, which obtained the exploration permit in 2004 and the mining permit in 2006.

However, work on the mine came to a halt when Guatemala’s Constitutional Court accepted an appeal for legal protection from a union of fishermen from Izabal, who alleged that fishing had been hurt by pollution from the mine.

In addition to Guatemala, Solway Investment operates in Ukraine, Russia, Macedonia and Indonesia, and in 2019 reported more than one billion dollars in total assets, according to its official website. 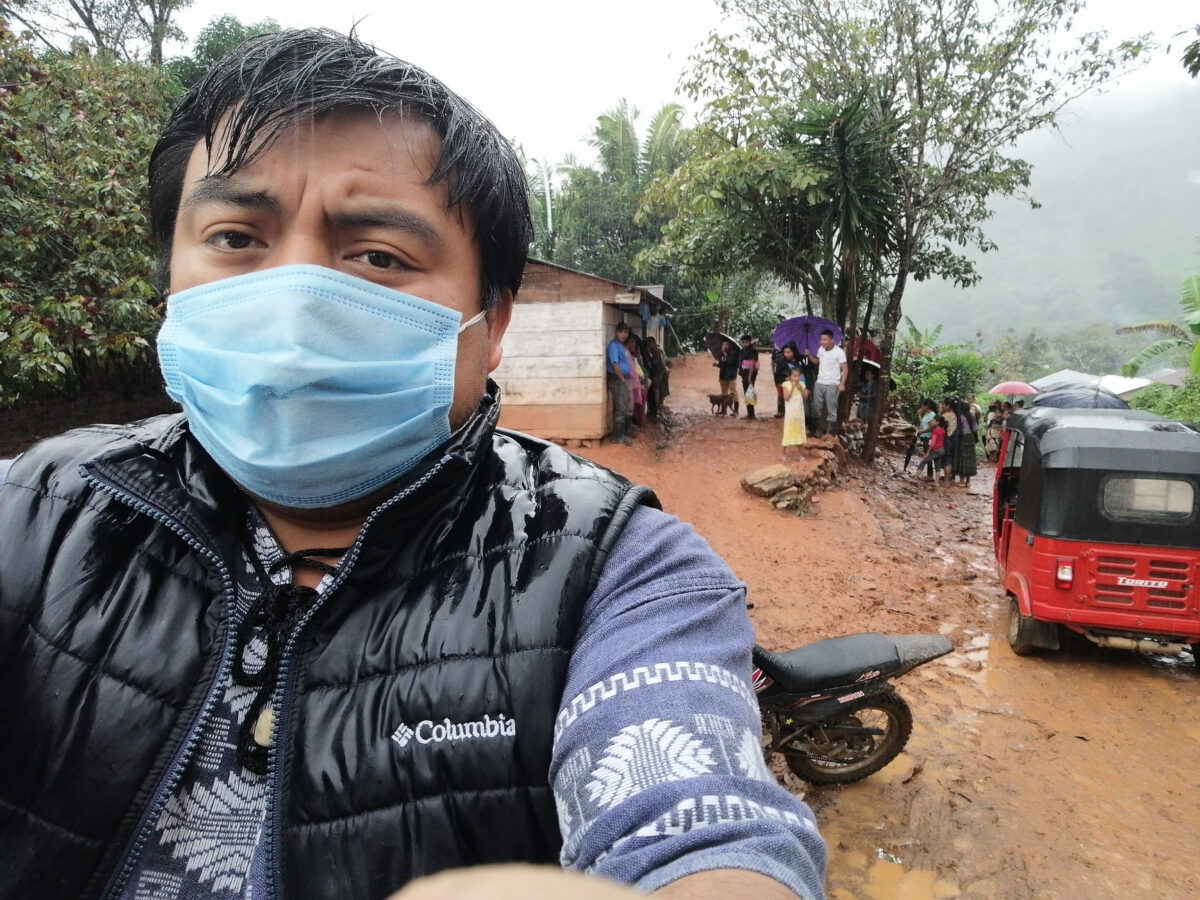 Abelino Chub, a Mayan Q’eqchi’ activist from the Maíz de Vida Association, who is part of the struggle in defense of the Mayan territories located in the area of El Estor and surrounding municipalities in the eastern Guatemalan department of Izabal, was arrested and imprisoned in February 2017 for opposing extractivist projects granted concessions by the Guatemalan government in the area. CREDIT: Courtesy of Abelino Chub/FB

In the hands of the Court

Since 1974, more than a dozen Q’eqchi’ Mayan communities have been trying to obtain a collective land title from the government’s National Land Fund (Fontierras).

But the government of that time and subsequent administrations denied them that right, despite the fact that since that year they have met all the legal requirements.

In 2002 the communities met the last of the requirements: the payment to Fontierras of a quota on the value of the land, Crippa said from the U.S. capital.

But they were denied their right to collective title as a result of obscure legal maneuvering.

The General Property Registry claimed that documentation on the provisional title had been lost, and demanded that the communities themselves make the effort to replace it, despite the fact that by law it was the responsibility of the government agency.

“The Registry allowed a page from a document to be extracted that made the registry entry disappear and that prevented the land titling agency from granting the definitive title in due time and form,” Crippa said.

As a result, the communities were not only denied their right to collective ownership of their land. In addition, extractive industry projects were imposed on them in their territory, and in other indigenous communities in the country, without carrying out the consultations required by law, or without conducting them properly.

In the case of the nickel mine, “they never asked the communities, they only asked the workers to sign some forms in support of the supposed consultation,” said Chub, 39.

The mining activities are carried out on overlapping lands, i.e., the boundaries are unclear and intermingle with those of the indigenous villages, due to problems in the land registry, and to date the discrepancy is still in place.

Following the struggles of the Mayan communities to defend their territories, which included the seizure of land in eastern Guatemala, the Guatemalan government authorized evictions that turned violent. Now the Maya Q’eqchi’ communities await an Inter-American Court of Human Rights ruling. CREDIT: Courtesy of Raúl Ico Pacham/FB

These indigenous communities, where the majority of the population speaks only their ancestral Mayan language, Q’eqchi’, did not stand idly by.

In August 2018, following legal action in Guatemala, they brought the case before the Inter-American Commission on Human Rights (IACHR), based in Washington.

The ILRC had been working with them since 2005 and three years later they had a clear strategy: to focus on one of the 16 communities, known as Agua Caliente, because it best represented the indigenous cause.

In a March 2020 report, the IACHR recognized the responsibility of the State of Guatemala for the violation of the indigenous community’s right to property, and violation of due process, among other rights protected by the American Convention on Human Rights.

Furthermore, the IACHR added that the State does not have a law that recognizes the right of indigenous peoples in Guatemala to collective ownership or dominion of their lands and the resources under their possession, as guaranteed by international agreements to which the country is a signatory.

The IACHR also said that the titling procedure to which Agua Caliente was subjected for more than 45 years had not been effective because it did not grant a definitive title within a reasonable period of time.

As the basis of the litigation still remains, regarding the overlapping of the Agua Caliente and mine lands, the case has been referred to the Inter-American Court of Human Rights, which together with the IACHR make up the inter-American human rights system created by the Organization of American States (OAS).

In a Feb. 9 hearing the parties were heard, and final arguments will be presented in writing on Mar. 11.

“We hope it will be a historic decision, that the Court can decide for the first time on the permanent sovereignty of indigenous peoples over their natural resources,” said Crippa. As an Inter-American Court verdict, this would have regional effects, especially since its rulings are not subject to appeal and set a legal precedent. 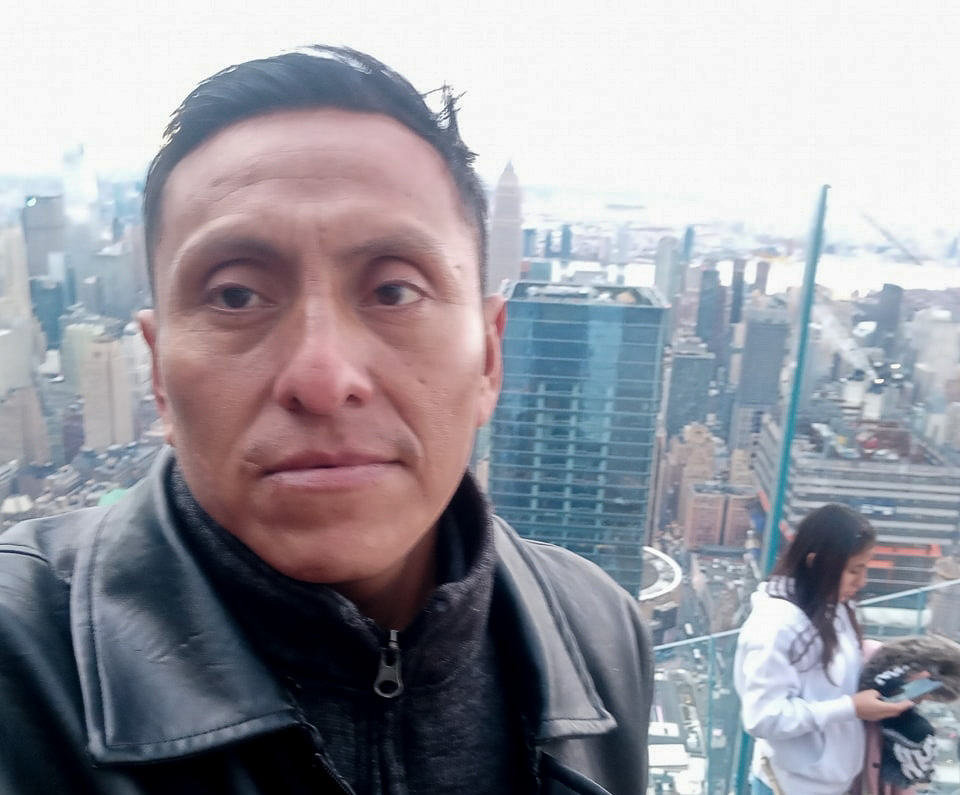 Raúl Ico Pacham, a Mayan Q’eqchi’ native of the Chab’ilch’och’ community in the municipality of Livingston, in the eastern Guatemalan department of Izabal, had to flee the country following the persecution of activists in defense of their ancestral territories. He is now living as an undocumented immigrant in New York and has applied for political asylum in the United States. CREDIT: Courtesy of Raúl Ico Pacham/FB

In the midst of this struggle, in October 2021, the State of Guatemala, through the Public Prosecutor’s Office and police forces, persecuted people who led protests against the government for granting the concession, and against the mine.

The government also declared a one-month state of siege in the area.

“They did that to scare people,” said Chub, who had to flee because he feared for his life, mainly because of his involvement in the fight against banana companies in the area.

He added, however, that in this area there are several major companies that band together to persecute activists regardless of whether they are fighting against mining, oil or banana companies.

Chub’s home was raided on Oct. 26, during the state of siege. But he had already fled to another part of the country.

“They broke the lock with a sledgehammer and entered. The only thing they found there was water, corn and beans,” he said.

Raúl Ico Pacham, who also belongs to the Q’eqchi’ Mayan people, had to leave Guatemala, fleeing persecution by the State. He is a native of Livingston, one of the municipalities in the department of Izabal, and has been an activist with the Guatemalan Comité Campesino del Altiplano (CCDA).

“My struggle was, more than anything, for the recovery of our ancestral lands that had been taken from us long ago by landowners and the military,” Pacham, 35, told IPS in an interview from New York, where he arrived without documents in April 2021 and has requested political asylum.

In 2016 the activist participated with other members of the affected indigenous communities in a takeover of ancestral lands. But the government ordered their eviction, a process that turned violent in October 2017.

In August of that year they broke into his house and stole, he said, documents from investigations they were carrying out on the land that had been taken from the indigenous people.