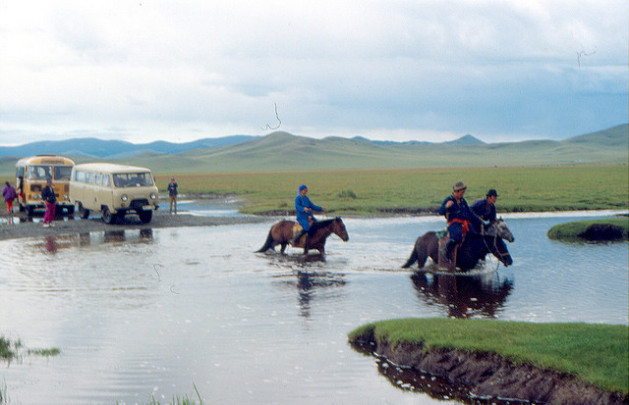 The mining project has been the focus of longstanding complaints from local herder communities. Credit: Zingaro/cc by 2.0

WASHINGTON, Mar 7 2013 (IPS) - The United States has refused to vote for involvement by the World Bank Group in a massive but controversial mining project in Mongolia.

In abstaining, the U.S. representative cited concerns over the potential environmental consequences and an inadequate impact study of the mine plan.

The Oyu Tolgoi mine, a 12-billion-dollar project, is looking to massively expand copper-and-gold extraction in the South Gobi Desert. Its parent company, the London-based Rio Tinto, is currently fielding funding proposals from multiple international investors, including the World Bank Group.

If the four-billion-dollar expansion goes forward, income from the mine could make up a third of the gross domestic product in Mongolia, which has significantly expanded its mining sector in recent years. On Wednesday, Rio Tinto stated that it was on track to begin operations by June.

Criticism of the plan has been widespread, however, with local communities and international civil society warning that concerns are being pushed aside and that the World Bank’s own safeguard guidelines are not being followed. It now appears that the U.S. backs some of this apprehension.

“[T]he United States’ review of the Environmental and Social Impact Assessment (ESIA) for the project has raised concerns in a number of areas,” a position paper, dated late February but publicly released this week, states.

“First, the United States believes the ESIA has gaps in critically important information, particularly related to the operations phase of the project and mine closure … Second, the ESIA does not provide a sufficiently detailed analysis of associated facilities and cumulative impacts.”

In particular, the policy statement notes that the impact assessment, which currently focuses almost exclusively on the project’s construction rather than its potential operation, covers this planned expansion “only lightly”. (The U.S. Treasury declined request for additional comment.)

The document also draws attention to longstanding complaints from local herder communities, currently pending before a World Bank Group auditor. The U.S. says it is “keenly interested in the outcome” of this review.

The U.S. position will not halt the funding proposal, which was greenlighted last week by the board of the International Finance Corporation (IFC), the World Bank’s private sector arm. The institution will now work with Rio Tinto to decide on a funding package.

The IFC, which is reportedly offering up to 900 million dollars in loans for the project, is joined in its interest by numerous other multinational donors and investors. These include the European Bank for Reconstruction and Development (EBRD, which also approved a 1.4 billion dollar loan last week), the U.S. Export-Import Bank, Standard Chartered Bank and several others.

Yet the U.S. explanation for its abstention may now strengthen civil society recommendations on how to improve the Oyu Tolgoi project.

“Without valourising the U.S. government, what they have said on this project is important – they have made some very reasonable recommendations, many of which overlap with our own,” Jelson Garcia, manager of the Asia programme at the Bank Information Center (BIC), a Washington-based watchdog, told IPS.

“The challenge is how these recommendations will be reflected in the loan agreement and in the updated management plan. Otherwise, it will be hard to hold the company accountable.” (BIC has an extensive resource on the project here.)

As noted in the U.S. policy statement, one of the major complaints by critics is that the IFC only entered the Oyu Tolgoi project very late. By the time the IFC’s required ESIA was filed, more than 90 percent of construction had been finished, and the assessment only covered the construction phase.

Nonetheless, when the project came up for a vote last week, as the United States noted, “the Boards of the IFC and EBRD [were] being asked to make a decision on this project without seeing the agreed commitments contained in the forthcoming Operations Phase Environmental Management Plans”.

Extensive civil society analyses of the probable impacts of the full-scale operation are available, however. These detail the mine’s intensive use of water in a desert area, as well as its plan to divert the Undai River, the major waterway in the area, which flows through the mine’s planned open pit.

In addition, environmentalists are disturbed over a reported plan to build a 750-megawatt coal-fired power plant at the site, with which to power operations. According to a November brief prepared for the Sierra Club, a U.S. conservation group, this would contravene both IFC and World Bank Group guidelines.

Last month, the IFC released an extensive public response to many of these concerns. It notes that the Oyu Tolgoi management has not made a final decision on long-term power sources, that the mine would be allowed to use only 20 percent of the water in a major local aquifer, and that the ESIA does include content on the mine’s operation.

The response also points out that the nomadic herders are not formally considered indigenous peoples, and hence are not covered under more stringent safeguards.

The project “is compliant with our sustainability policy and environmental and social standards,” the IFC said in a statement e-mailed to IPS. “The financing will not be concluded before certain key environmental management plans have been agreed to and publically disclosed. During the span of our proposed financing, IFC will actively monitor the project to ensure continued compliance with our standards.”

Alongside, the Compliance Advisor/Ombudsman (CAO), an independent body charged with response to complaints from communities affected by IFC projects, has accepted two cases (here and here) stemming from the Oyu Tolgoi project, including one last week.

These relate particularly to the project’s use of land and water, including the plan to divert the UndaiRiver. “The complainants contend they have not been compensated or relocated appropriately, and question the project’s due diligence, particularly around the issue of sustainable use of water in an arid area,” CAO notes.

Both assessments are ongoing.

According to BIC’s Garcia, such concerns raise questions about IFC’s involvement in the project in the first place.

“Given that IFC is not a major source of financing for this project, the main argument from the institution is over the ‘additionality’ it brings, specifically its performance standards and requirements for environmental and social issues,” he says.

“But we and many others have identified multiple flaws in exactly those assessments, even though the project has now been accepted. So the additionality here is highly questionable.”