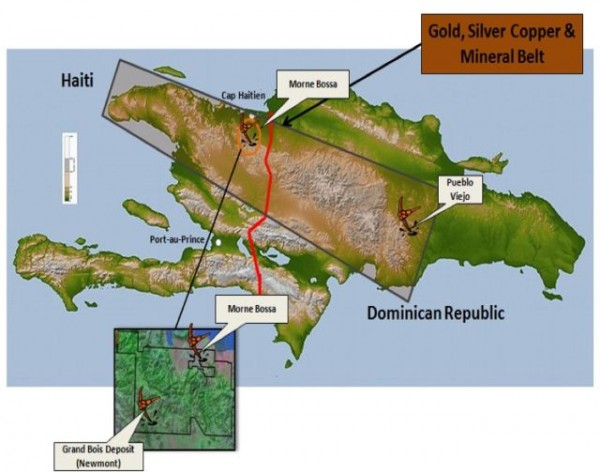 PORT-AU-PRINCE, Feb 24 2013 (IPS) - Outraged that they have not been consulted, this week Haitian senators called for a moratorium on all activities connected with recently granted gold and copper mining permits.

In a resolution approved by 15 of 16 senators present, the lawmakers also demanded the establishment of a commission to review all of the current mining contracts and “a national debate on the country’s mineral resources”.

For a country with a weak state, the royalty is the safest place to get your money. Anything under five percent is just really ludicrous.

The resolution – voted Wednesday in reaction to three new gold and copper mining permits issued late last year by the government – decried “the genocide that accompanied the pillage of our mineral resources in the 15th century”, “the waste of resources… since the January 12, 2010 earthquake”, the foreign mining experiences of the 20th century which caused “trauma”, and “the incapacity of our country to calmly undertake negotations related to its mineral resources in a context of political disequilibrium”.

News of the permits first caused an uproar in January. Journalists, experts and politicians speculated on what Haiti had lost or would gain, and accused the state mining agency (the Bureau des Mines et d’Energie – BME) of granting “illegal” contracts.

The senators say that the three new permits violate the Haitian Constitution because they are based on 1997 conventions that were never approved by the parliament.

At a special hearing on Jan. 22, senators accused BME director Ludner Remarais of subverting the law.

“In 20 years the parliament has never ratified any mining conventions,” Senator Steven Benoit (West) thundered, while Senator Andris Riché (Grande Anse) shouted: “We must not accept wacky contracts that seek to bury the people.”*

“I am sorry the Senate was never contacted,” Remarais responded, tears in his eyes.

“Decrees have the same authority as laws. If someone wants to be a demagogue or make political hay, he can call the conventions ‘illegal,’ but they are legal,” Anglade told IPS in a telephone interview on Feb. 6, 2013.

Cadouche, HAITI, 21 February 2013 – The population of Cadouche, a small village about 12 kilometres south of Cap-Haitian in Haiti’s North department, is nervous about three new mining exploitation permits granted last December in an opaque and secretive process.

Located near the Morne Bossa deposit, the Cadouche economy is based mostly on agriculture. Families work day and night to take care of their needs. And they ask themselves if they are invisible to the authorities in Haiti’s capital.

Recently, over a hundred people living in Cardouche met to learn more about the mining industry. One after another, they asked questions and expressed their frustrations.

“Until today, not one single member of the government or of the company has consulted the population to hear our complaints or ask for our agreement to the mining of the Morne Bossa deposits,” said Mezadieu Toussaint, a teacher and farmer in his fifties. “If the mine benefits the population, that would be wonderful. But we are worried that it will poison our environment.”

Steno Chute, a member of the Democratic Movement for the Development of Quartier-Morin (Federation du movement démocratique pour le développement de Quartier-Morin - Femodeq) who grows corn, beans and sorghum, said he is afraid of mining.

“Mining can have disastrous consequences,” he told the crowd. “We are really anxious and nervous. The water and environment will be polluted.”

“The [Jean-Bertrand] Aristide, Préval and [Michel] Martelly governments are opening up the country to pillagers in the name of the untouchable neoliberal plan, without thinking of the devastating consequences,” noted farmer Francisco Almonord, bitterly.

Teacher and farmer Toussaint said he did not know where to turn: “Against whom should we fight? The Haitian government or VCS?”

The three “new” permits – for mining deposits in Morne Bossa, Douvray and “Faille B” in Haiti’s North and Northeast departments – are not new. They are the conversion of permits for “exploration” into permits for “exploitation”.

They were originally granted in 1997 by the René Préval government via two mining conventions with two Haitian companies – St. Genevieve S.A. and Sociète Minière Citadelle S.A. Because they were sold or they changed their names, today the conventions are held by two small firms, also ostensibly Haitian: Société Minière Delta and Société Minière du Nord-Est SA (SOMINE S.A.).

But in both cases, the power rests overseas, in the hands of foreign companies and shareholders.

The Société Minière Delta is the property of VCS Mining, a small U.S. private company registered in the state of Delaware, infamous for its laws which permit firms to hide their profits, keep their operations secret and pay minimal taxes.

SOMINE S.A. is a subsidiary of the Canadian mining company Majescor which says it specialises in “emerging” regions. Last month, Majescor offered for sale over two million dollars worth of shares for “the SOMINE project.” Majescor says it controls SOMINE because it controls a company called SIMACT Alliance Copper-Gold Inc., which in turn controls the majority of SOMINE shares.

The three mining permits are the most advanced of the dozens of permits for one-third of Haiti’s north (about 2,500 square kilometers) handed out in recent years and will convert into concessions once the companies start mining.

VCS Mining, the company working in Morne Bossa, maintains that it has followed Haitian law from the beginning. Last year, VCS submitted the required “feasibility study” for the site, which maps out the steps they will take in order to prepare for mining, and it was finally accepted by the BME in November, a representative told IPS in a telephone interview.

The spokesman – who asked not to be identified by name because his company has decided to keep a low profile until the resolution of the BME-Senate conflict – insisted, “We have done the work as required by law. The permits are legal.”

The VCS representative also said that his company has invested over four million dollars in the Morne Bossa site so far, and that since gold was first discovered by U.N. geologists in the late 1970s, “over 38 million (dollars) has been spent.”

Seeking verification and clarification, IPS requested an interview with BME director Ludner Remarais. The interview was three times promised, and then denied. IPS wanted to confirm what VCS said, to ask for a copy of the feasibility studies and also to ask about the illegality of the original conventions.

IPS also wanted to ask Remarais about the very low royalties in the two mining conventions. Both award the Haitian state only 2.5 percent of the value of the minerals extracted – a number that is “really low,” according to mining royalties expert Claire Kumar.

“Anything under five percent is just really ludicrous for a country like Haiti. You shouldn’t even consider it. For a country with a weak state, the royalty is the safest place to get your money,” Kumar told IPS in 2012.

According to Haitian mining law, the financial agreements in a convention can be “revised”, but so far, no government official has mentioned the possibility.

The other major concerns are lack of transparency, and the lack of participation from and benefits to local communities. See Sidebar: Morne Bossa Neighbours Nervous

The Feb. 20 Senate resolution cannot legally block mining activities, but it will undoubtedly cause the BME and the government to pause, according to Eddy Laguerre, a lawyer and also a member of the editorial staff at the Haitian weekly Le Matin.

“When the Senate votes a resolution, the executive needs to be careful,” Laguerre told IPS in a telephone interview. “If the resolution is not respected, the Senate can find ways to punish the executive, and can even punish it politically by calling for a change in government.”