LIMA, Dec 26 2011 (IPS) - The stiff local opposition to the Conga gold mining project in the northern Peruvian highlands region of Cajamarca revived a long-postponed debate in this country, on the weakness of environmental impact studies in the mining industry. 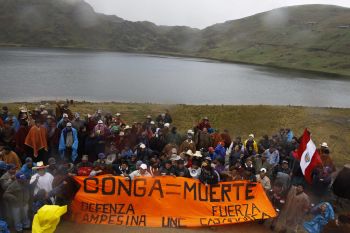 Local residents opposed to the Conga gold mine hold a vigil at one of the lakes that the project would affect in the highlands of Cajamarca. Credit: Courtesy of La República newspaper

In response to the controversy, the country’s new environment minister, Manuel Pulgar, announced a plan to address the problem. However, layoffs of several environmental experts in the ministry of mines who rejected flawed environmental impact assessments (EIAs) have raised doubts about how far the changes will actually go.

“The environmental assessment system must be strengthened, to generate greater confidence,” Pulgar told IPS. He said his ministry has to play a more active role, and added that in early January it would put forth a proposal to improve the process.

Protests in Peru’s mining regions over environmental damages have had a high social coast.

According to the November report by the ombudsman’s office, there were 151 social conflicts in the country this year, nearly 60 percent of which involved environmental issues. And during the government of Alan García (2006-2011), 191 people were killed in clashes between police and demonstrators.

Pulgar said his ministry is still evaluating which part of the EIA process it should be involved in, since it is the ministry of mines and energy that is in charge of fomenting investment in the mining industry and reviewing and approving impact studies.

President Ollanta Humala, who took office in July, announced on Dec. 18 that the offices that review the EIAs would be restructured to avoid protests like the ones that broke out against the Conga gold mining project in Cajamarca.

The projected gold mine, which would destroy four high mountain lakes, is to be run by the U.S.-based Newmont Mining Co, which operates the nearby Yanacocha mine, the largest gold mine in Latin America.

The protests against the mine brought activity in the city of Cajamarca, the regional capital, to a halt for two weeks in November and early December, leading the government to declare a state of emergency and send in troops.

As a result of the social conflict, the government promised that the project’s EIA, which was approved by the ministry of mines and energy in October 2010, would be reviewed by international experts.

The protests also prompted a new review of the EIA by the environment ministry, which found that two of the four lakes were to be emptied out to extract the gold, while the other two would be used to deposit the earth and rock removed.

But no hydrological or hydrogeological studies were carried out for the project, even though they are essential to prevent leakage of toxic waste. Nor was an integral study of the micro-basins that could be impacted by the mining activity carried out, and the local communities that would be affected were not all informed about the Conga gold mining project.

Despite the announcement that the EIA process would be reformed, the ministry of mines and energy recently dismissed three environmental technicians from its general bureau on environmental issues in mining, after they found serious flaws in several studies.

The environmental experts rejected an EIA presented for a mine tailings deposit projected by the Cobriza copper mine run by the U.S.-based Doe Run company. In their final report, dated Oct. 3, the technicians said the EIA could not be accepted because the company had begun to build the tailings facility before presenting the impact assessment, which is illegal.

Doe Run’s large multi-metal smelter in the central Peruvian highlands city of La Oroya has caused such severe pollution that the New York-based Blacksmith Institute included the city on its list of the world’s 10 most polluted places.

The team of technicians who were laid off also rejected EIAs presented for a project to expand a plant run by Volcán, a Peruvian company, in the central region of Pasco.

Medical studies carried out in 2005 and 2007 found that more than 80 percent of children living in the area around the company had blood lead levels exceeding 10 micrograms per decilitre of blood (mcg/dl), the acceptable limit set by the World Health Organisation (WHO).

Fredesbindo Vásquez, who headed the mining ministry’s general bureau on environmental issues in mining from 2007 to 2009, told IPS that the lack of job security and support suffered by the technicians who review the EIAs hinders “ethical and transparent work,” which is essential for monitoring the country’s most profitable economic activity.

Mining, Peru’s biggest foreign exchange earner, brings huge profits to companies in the industry. From 2007 to 2010, the biggest companies took in more than 31 billion dollars, according to Peru’s Securities and Exchange Commission (CONASEV).

Vásquez said the general bureau on environmental issues in mining was the target of heavy political and business pressure, and argued that the office should be transferred to the environment ministry.

The bureau currently has 20 technicians on staff to review the EIAs presented by mining companies, while 41 outside consultants are paid directly by the companies. This system was adopted to expedite the process of reviewing the EIAs.

But in the view of experts like Vásquez, the entire process should be in the hands of professionals working directly for the ministry.

In June 2010, 378 EIAs, submitted since 1993, were stuck in the bureau, and the directors announced that progress would be made in unblocking the bottleneck.

Vásquez, an agricultural engineer with 40 years experience in water management in the mining industry, said the greatest risk is toxic underground leaks that can contaminate the fragile water sources that the highlands population depends on.

“These ecosystems are highly vulnerable,” Vásquez said. “People live in adverse conditions in the highlands, where the state usually does not guarantee basic services, and the only thing they do have is water, to carry out their productive activities and survive.

“If they see that another activity (mining) is going to take away the only option they have left, they will defend it like survivors in the desert,” he said.

A report by the general bureau on environmental issues, presented to some 80 companies in July 2010, revealed that several EIAs underestimated the potential water and air pollution.

The document, made public by IDL-Reporteros, an independent team of investigative journalists, says EIAs do not generally include an inventory of Andean springs or wetlands that could be affected, and do not analyse the cumulative effects on water sources.

But the official report revealed an even more serious aspect: several EIAs drawn up by consultancies hired by mining companies contain entire paragraphs copied and pasted from other reports.

In his interview with IPS, the environment minister said the observations made by the EIAs made sense, because they analyse projects that have not yet been implemented. He also said the ministry of mines and energy is assessing the consultancies that work for the mining companies.

Vásquez said the authorities should not approve any EIA that fails to guarantee risk prevention and that does not include detailed hydrogeological assessments – as in the case of the Conga gold mine and the Tía María copper mine in the southern region of Arequipa, where five protesters were killed in a police crackdown before the authorities cancelled the project in April.

The EIA from the Tía María mine received 138 observations from the United Nations Office for Project Services (UNOPS).

The Red Muqui, a network of NGOs working on mining, human rights, the environment and development, also reviewed the Tía María EIA and issued warnings about the impact on water sources, because the proposal by Southern Peru Copper to extract water from the El Sombrero beach aquifer “has not been studied closely enough,” agricultural engineer Mirella Gallardo, who took part in the network’s review, told IPS.

But aside from the need for sound, transparent EIAs, Vásquez said it was time for companies and the state to act with respect and consideration for the local populations, because while the mines rake in millions of dollars in profits, the indigenous communities live in extreme poverty.

“That is the only way to gain the people’s trust and avoid conflicts,” he argued.