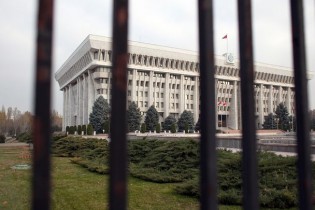 By David Trilling
Kyrgyzstan must protect itself from Arab Islamists and gay-loving Americans; so say supporters of a sweeping draft law that could shutter many non-governmental organisations and, like a Russian bill adopted in 2012, label foreign-funded activists as “foreign agents.”

By David Trilling
The Kumtor gold mine is Kyrgyzstan's lone economic gem. Yet, despite the mine’s vital importance to the Kyrgyz economy, officials appear to be mulling a doomsday option for the Canadian-run project.

By David Trilling
(EurasiaNet) - The Kumtor gold mine is Kyrgyzstan’s lone economic gem. Yet, despite the mine’s vital importance to the Kyrgyz economy, officials appear to be mulling a doomsday option for the Canadian-run project. Officials in Bishkek and executives for Toronto-based Centerra Gold, the entity that owns Kumtor, have been struggling to work out a new operating arrangement.

By David Trilling
Glance at the parking lot outside parliament, at the fleet of Lexus SUVs kitted out with chrome, and you might think Bishkek is the capital of a wealthy country. A block down Chui Avenue, a shiny new Range Rover is parked on the sidewalk. Police drive their own BMWs.

By David Trilling
Authorities at Kyrgyzstan’s Ministry of Culture want to ban a play that discusses domestic abuse and sexual violence because it “promotes scenes that destroy moral and ethical standards and national traditions of the peoples of Kyrgyzstan.”

By David Trilling
Allegations that a member of Kyrgyzstan's KGB-successor agency organised the brutal rape of his wife have outraged women’s rights activists in Bishkek. But what rights defenders call an ordinary crime is having an extraordinary effect because of the victim’s response: she pressed charges.
ADVERTISEMENT ADVERTISEMENT