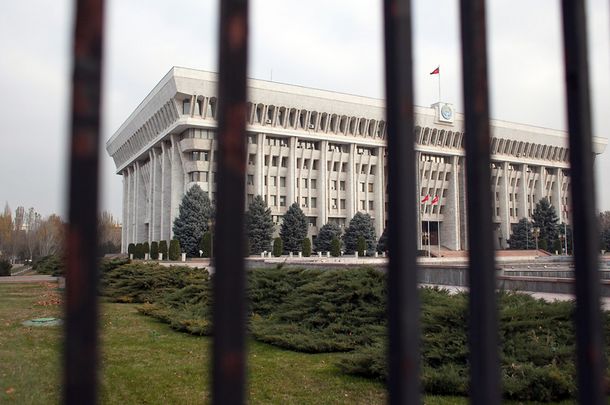 The Kyrgyz parliament, as seen here in November 2014, may vote in December to consider a possible new law that would label foreign-funded organisations “foreign agents.” But some critics of the bill, which closely resembles a similar law already passed in Russia, argue it would add layers of bureaucracy and possibly force some civil society NGOs to close their doors. Credit: David Trilling

BISHKEK, Dec 1 2014 - Kyrgyzstan must protect itself from Arab Islamists and gay-loving Americans; so say supporters of a sweeping draft law that could shutter many non-governmental organisations and, like a Russian bill adopted in 2012, label foreign-funded activists as “foreign agents.”

Kyrgyzstan currently has the most vibrant civil society in Central Asia. But critics of the bill feel that with Russia expanding its grip on the region, and Kyrgyz lawmakers seemingly eager to please Moscow, the walls are fast closing in on free speech and other civil liberties.

Even if this particular bill does not pass, other legislative changes are chipping away at basic rights, they say. In recent weeks, for example, the State Committee for National Security (GKNB) has prosecuted a local anti-torture campaigner and harassed the American watchdog Freedom House for merely distributing an opinion poll that asks sensitive questions.

Questions about Moscow’s influence over the legislature are hotly debated in Bishkek. The city is rife with rumours about the Kremlin buying MPs, local media outlets, and even whole ministries.

Lawmaker Nurkamil Madaliev – a co-sponsor of the bill who promises a vote in parliament as soon as December – says the existing law governing NGO activities, adopted in 1999, was written at a time when Kyrgyzstan was too open to the world.

“Back then, there was a unipolar world order, the Unites States was the dominant country, and now we see that this order was unjust. Not all the funds that finance NGO activities in Kyrgyzstan are aimed at creating a favourable situation,” Madaliev told EurasiaNet.org.

Madaliev says his legislative changes would help protect an embattled nation from two existential threats: Islamic extremism funded by wealthy Gulf Arabs and the efforts by some Western-funded organisations to educate young Kyrgyz about gay rights and reproductive health.

Legal analyst Sheradil Baktygulov contends that an underlying aim of the bill is to weaken checks on governmental authority: officials could use the bill, he says, to settle personal vendettas against a once-thriving watchdog culture. “They can say [to an NGO], ‘If you don’t do this or that you will be closed,’” Baktygulov explains.

Dinara Oshurahunova, the head of the Coalition for Democracy and Civil Society, sees a Russian hand behind the bill, which she says would bury organisations like hers with bureaucratic reporting requirements.

“Russia would like to have its policy and rule here. Our state cannot protect us or [the openness] we had before. Or they don’t want to,” she says.

Some officials have lobbied against the legislation. During a parliamentary debate on Nov. 24, a Justice Ministry official said the bill is unnecessary and would create expensive layers of bureaucracy the state cannot afford. MPs shouted him down.

Local and international NGO representatives also spoke out against the initiative during the hearing. The session resulted in the adoption of a non-binding recommendation to shelve the measure.

The law is “too vague,” says parliament’s vice speaker, Asiya Sasykbaeva, who was a prominent activist before entering politics. Sasykbaeva also fears the bill will be used to silence government critics. She says the “foreign agent” label deliberately evokes a mood reminiscent of the Stalinist terror in the 1930s, when millions were executed or sent to labour camps for allegedly being enemies of the state.

But NGOs are not without fault. “Sometimes they exaggerate and they do it unprofessionally,” Sasykbaeva says, describing avoidable conflicts between several NGOs. “And because of these three or four NGOs others are suffering.”

Questions about Moscow’s influence over the legislature are hotly debated in Bishkek. The city is rife with rumours about the Kremlin buying MPs, local media outlets, and even whole ministries.

Madaliev concedes his bill is based on Russia’s, but denies Moscow has pressured or bought him or his colleagues. “This particular bill gives us an opportunity to resist the influence of all interested parties, including Russia,” he insists.

Over the next month, parliament is expected to rubberstamp changes to dozens of laws and regulations as Kyrgyzstan prepares to join the Russia-led Eurasian Economic Union (EEU).

One opposition-minded politician considering a run in next year’s parliamentary elections says that “fear of Russian influence during the election is a big factor” in why lawmakers are tripping over themselves to back EEU accession. He describes a parliament packed with sycophants afraid of Moscow.

“Our lawmakers think these laws don’t mean anything. They think this is not serious, but it is,” the politician says.

Arguments that Russia is playing dirty are bolstered by negative articles in the local press that use familiar Russian tropes to target American-funded NGOs. And a video currently circulating online is similar in its accusations and insinuations to the specious exposes aired on Russian state-run television.

The video, entitled “Trojan Horses,” accuses Washington of using NGOs to foment revolution around the world and of threatening to destabilise Kyrgyzstan with a Ukraine-style, anti-Russian uprising. Over a montage of violent war footage it names Freedom House, USAID, Human Rights Watch, the local Soros Foundation and others as front organisations that serve the U.S. government’s nefarious purpose of changing regimes and destroying sovereign states.

“We are getting attacked by Russian-funded groups and our government just keeps silent. It is very naïve to hope they will protect us. But after us, I tell them, ‘It will be you next, and there will be no one here to protect you,’” says Oshurahunova of the Coalition.

The state security police’s harassment of Freedom House “makes us very nervous,” says the expatriate head of another NGO. Several NGO leaders also complain that the American Embassy is having trouble helping American-funded NGOs secure visas for their foreign staff. “We’re left to fend for ourselves,” the expatriate says. The U.S. Embassy did not respond to a request for comment.

Oshurahunova believes the “foreign agents” bill will end up not being adopted. She feels that the NGO regulatory measure, along with pending anti-gay legislation that has a much better chance of passage, are distractions to keep civil society watchdogs busy while parliament quietly approves reams of EEU legislation.

“They are changing many laws to come into line with Eurasian Union regulations and doing it without any discussion. They’re changing laws about peaceful meetings, changing laws about free media. They tell us this is only about economics, but they’re taking away our civil rights,” Oshurahunova says.