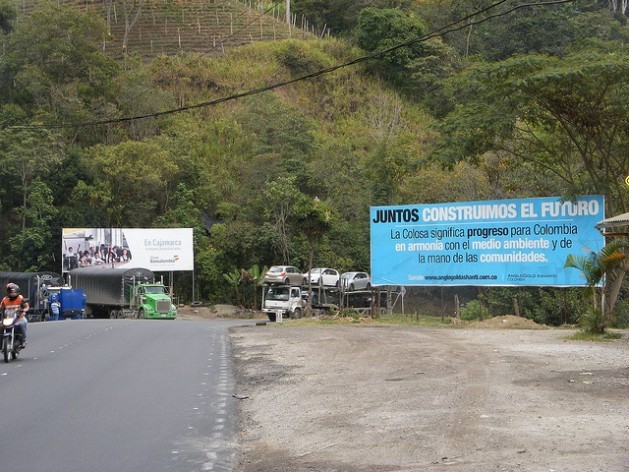 AngloGold Ashanti Colombia billboard on the road from Ibagué, capital of Tolima, to Cajamarca: “Together we build the future: La Colosa means progress for Colombia in harmony with the environment and hand in hand with communities.” Credit: Constanza Vieira/IPS

In a popular vote on Sunday, whose results are binding, 99 percent of the 2,995 people in the municipality of Piedras who cast ballots – out of a total of 5,105 local people eligible to vote – said “no” to the South Africa-based gold mining company’s operations in the area.

Piedras, in the central province of Tolima, is 96 km west of La Colosa, the largest open pit gold mining project in the northern Andes, located in the district of Cajamarca, known as “Colombia’s breadbasket.”

La Colosa, which is still in the feasibility study stage, is the third-largest mining project of AGA, which is the world’s third-largest gold producer, with 21 mining operations in 10 countries.

“In Tolima there is enough water for all economic activities,” says AngloGold Ashanti. Mining uses “between two and four percent” of the water supply – a fraction of what agriculture uses, the company argues.

The firm also says that in La Colosa, it would use rainwater, would create reservoirs for times of drought, and would use a closed water circulation system.

But the “IKV Pax Christi report on the AGA mining project in Cajamarca”, published in 2009 by the Dutch chapter of the Pax Christi international church peace movement, provides more comprehensible figures, based on mining industry statistics.

“AGA anticipates that approximately 1.0 cubic metre of water per second will be required to process each ton of ore,” the IKV Pax Christi report says.

“Given the assumed processing of 20 to 35 million tonnes of ore per year, this would require about 631 million to 946 million cubic metres of process water per year,” it adds.

“[T]he quantities of water needed would be tremendous, and could easily generate increased competition and disputes with other downstream water users, such as the rice growers,” the report warns.

The office of the inspector general says the area around La Colosa is ecologically sensitive and has 161 water sources.

According to the report “Mining in Colombia – Foundations for going beyond the extractivist model”, published this year by the office of the comptroller-general, La Colosa will produce a total of 759 tonnes of gold over 20 years. The estimate is based on 2008 figures from AGA.

AGA Colombia’s director of communications, Sandra Ocampo, told IPS that the material removed would yield one gram of gold per tonne.

AGA estimates the mine’s useful life at 20 years, although Ocampo said it could be longer, since the firm’s technicians “are still making discoveries that increase its size, in the project’s direct area of activities and in surrounding areas.”

The company thus does not rule out the possibility of mining gold in La Colosa for up to half a century.

But that depends on whether “the preliminary exploration can move forward so AGA manages to assess what there is in the area,” Ocampo said.

In the battle over La Colosa, AGA filed a lawsuit in January against Piedras Mayor Arquímedes Ávila, because a roadblock by local residents was blocking the circulation of the company’s employees, vehicles and machines.

But the attempt to sue the local government, which according to the company had failed to take action to prevent the roadblock, did not go anywhere.

The Tolima environmental authority brought AGA’s activities in the area to a halt on three occasions, most recently in March, when it announced penalties for repeated irregularities.

AGA decided to install the processing plant for La Colosa in Doima, a rice-growing village in the municipality of Piedras, whose residents began to mobilise as soon as they found out about the plans, in January.

Activities to block the gold mining project have continued since then. Ávila called on the 5,105 eligible voters in Piedras to come to the polls on Sunday to respond “yes” or “no” to one question: do you support AGA’s mining activities in the area?

The 12-line question asked local residents whether they accepted the “exploration, exploitation, treatment, transformation, transportation and washing of materials” from the company’s large-scale gold mine.

It also asked if they accepted the “storage…and use of materials harmful to health and the environment,” like cyanide and other toxic substances, and “the use of surface and underground water” for gold mining, which threatens the water supply for human consumption and agricultural use.

But AGA argued that “the description included in the question does not reflect the way we operate.” The firm complained that it had not been listened to, and that Sunday’s vote was not “an informed and coherent decision” but one that was “induced by prejudice”.

Under Colombia’s law on plebiscites, the result of the vote is binding if at least one third of voters participate – in other words, a minimum of 1,700 voters in the case of Piedras.

However, different interpretations of the law’s jurisdiction mean a legal battle is looming.

The ministry of mines and energy claims municipalities cannot decide on gold-mining projects within their jurisdictions, and that authorisation by the ministry or by the national environmental permitting authority takes precedence over popular votes or plebiscites.

According to Colombia’s statistics office, 33.5 percent of the people in Piedras and 28.3 percent in Cajamarca were poor – defined as “unsatisfied basic needs” – as of June 2012.

In a communiqué, AGA said mining would generate 1,500 direct jobs and 60,000 indirect jobs, as well as 477 million dollars in taxes and royalties over the next 20 years.

“La Colosa is a golden opportunity for Tolima…that will bring progress and well-being,” it stated.

But many people in Cajamarca who spoke to IPS were sceptical.

“The mining company is buying up farms, and those who don’t want to sell find themselves hemmed in and without a future,” said one mulberry grower who preferred not to give his name.

“Without permission, AngloGold uses private roads to drive in with a hellish number of trucks,” said a local woman who was also fearful of having her name published.

Although her restaurant has benefited from the influx of company personnel, she said she preferred to leave a healthy environment to the young people in her family.

AGA created the civil organisation Sí a la Mina (Yes to the Mine), which divided the community. And the local leaders who have not been won over feel isolated.

The majority of the population in Cajamarca supports mining and believes that everyone will benefit, and that in 30 years, everything will be back to normal, because AGA told them it would cover the mine with greenery after it is finished.

At least, that is what rural children say the mining company has told them.

Local people who spoke to IPS said the children live in remote rural areas of Cajamarca, where they never even see cars, and where they walk several kilometres to school each day.

On Saturdays, AGA sends vehicles to pick them up at their homes to take them to parties it has organised. The company has also distributed laptop computers to local students. When they come home from these events, the children argue with their parents about why they are opposed to the mine.

The mayor of Cajamarca, Evelio Gómez, has accepted the mine. If a school needs painting and reforms, AngloGold pays. It also makes gifts, like ambulances.

“And the mayor doesn’t do anything,” a local resident of Anaima, in Cajamarca, told IPS. Most of the people in that village are united against La Colosa – as are the people of Piedras.