COLOMBIA: Gold vs Preservation in the Central Mountains

CAJAMARCA, Colombia, Jul 13 2009 (IPS) - In a protected area of the Cordillera Central, Colombia’s central mountain range, gold mining plans are clashing with the desire of farmers, activists and environmental officials to preserve forests and water resources. 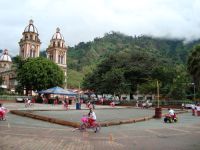 Cajamarca's central square, with a gold-rich mountain in the background. Credit: Helda Martínez/IPS

A movement made up of 25 international, national and local non-governmental organisations is calling on the government to halt the exploration activities of the South Africa-based mining giant AngloGold Ashanti.

The corporation, which has been working in the area since 2006, is awaiting authorisation to conclude explorations of a gold deposit situated in the municipality of Cajamarca in the central-west department (province) of Tolima, and within the Central Forest Reserve.

A 1959 law demarcated the reserve in order to ensure protection of a 1.5-million-hectare strip running north-south through central-west Colombia and passing through 10 departments, Tolima among them.

The area holds important water resources, with 160 headwaters and the Coello River basin, as well as the ecosystems that sustain them: high plateaus, cloud forests and both protected and productive forest areas, according to the department’s top environmental authority, Cortolima (Tolima Autonomous Regional Agency).

In the last decade, the company obtained permits to explore 27 areas of Tolima, including 15 in rural Cajamarca. The authorisations came from the Colombian Institute of Geology and Mining, a division of the Ministry of Mines and Energy. In 2006, AngloGold Ashanti discovered the gold deposit.

In December 2007, the corporation announced that the La Colosa site – initially estimated at 12.3 million ounces of gold – would be one of the world’s 10 largest gold deposits.

The firm hired 400 workers in January 2008 and stepped up exploration, taking water and soil samples from 74 perforations that were “up to 700 metres deep,” said Evelio Campos, coordinator of the NGO Ecotierra de Cajamarca.

In February 2008, Cortolima director Carmen Sofía Bonilla requested the intervention of the Ministry of Environment, Housing and Development to order a freeze on the mining project.

By law, companies must apply to the Ministry of Environment for a permit for economic activities in protected zones. This allows for delimiting an area where there is only grass and stubble, but it is intended for basic works that do not affect protected species, Bonilla explained.

But because the company had failed to apply for the permit, Bonilla’s petition for a freeze was accepted.

“In February 2008, the mining work was suspended by order of the ministry,” economics student Cristian Frasser, of the University of Tolima and member of the NGO Environmental Awareness (Conciencia Ambiental), told Tierramérica.

But in May of last year, the company formalised a request to operate on 515 hectares in order to determine the project’s economic and environmental viability, and the Ministry of Environment gave the green light, but for only 6.4 hectares.

Hiring has been cut down to no more than 30 workers, but it is impossible to obtain precise figures because information about the mining project is restricted and the army is guarding access to the mining site itself.

La Colosa is located 5.5 km from the town limits of Cajamarca and 35 km west of Ibagué, the departmental capital.

The population of Cajamarca is about 25,000, mainly small farmers and rural workers. A few are merchants, with shops around the central square, a required stop when travelling between Colombia’s central and western regions due to its proximity to the Pan-American Highway.

The rural portion of Cajamarca municipality is approximately 500 square km that includes a range of mountain altitudes, where a variety of crops are grown, depending on the temperature: coffee, fruit and vegetables like arracacha (Arracacia xanthorriza), a tuber cultivated in cooler climates.

Critics warn that agricultural development of the area is in danger if the authorities give the go-ahead to mining activities.

The Catholic organisation Pax Christi Netherlands, lawmakers from across the political spectrum, the Attorney General’s Office and the Ibagué environmental prosecutor Diego Alvarado have all joined in the campaign against mining at La Colosa.

At a public hearing held in February, Alvarado argued that “the gold of La Colosa is dispersed in the rocks, in concentrations of just a few grams per tonne, which would require intensive, open-pit mining, with serious consequences for the region.”

That mode of production requires extracting an enormous volume of rock, which then undergoes a chemical process of lixiviation to separate out the gold metal from the rest of the minerals.

“For the lixiviation they will use cyanide, which makes it impossible to believe that this activity could be compatible with soil use in areas that are forest preserve, if cyanide contaminates the groundwater,” said Alvarado.

A study conducted by U.S. hydro-geologist Robert Moran, hired by Pax Christi, estimated that the operation would need “one cubic metre of water per tonne of ore processed per second” in order to separate out the gold.

That level of consumption would exhaust the water supplies that feed “the aqueduct for crops, with 400 kilometres of canals that irrigate rice, sorghum and cotton in the central and south of the department, and which supplies water to five municipal aqueducts,” activist Paola Robayo, a forest engineering student at the University of Tolima, told Tierramérica.

The authorities will have to decide whether to cancel the exploration permit, and thus close off future exploration, or to change the status of the forest preserve in order to lift the environmental restrictions.

“We know the influence that AngloGold Ashanti has in highly corrupt countries like Colombia, which is why we wouldn’t be surprised if they end up changing the legislation,” said activist Campos.

Last month, Rafael Hertz, chair of the company’s Colombia affiliate, told the press that the ministry’s decision is expected in July.

In the meantime, AngloGold Ashanti has invested in community development projects. “They are painting houses, paving streets and making donations to schools,” said Campos. The firm also sponsored the Folkloric Festival of Ibagué, held annually during two weeks in June.

In an ironic twist, the popular festival also provided a venue for critics of the mining project to distribute pamphlets and to display banners of protest against the company.