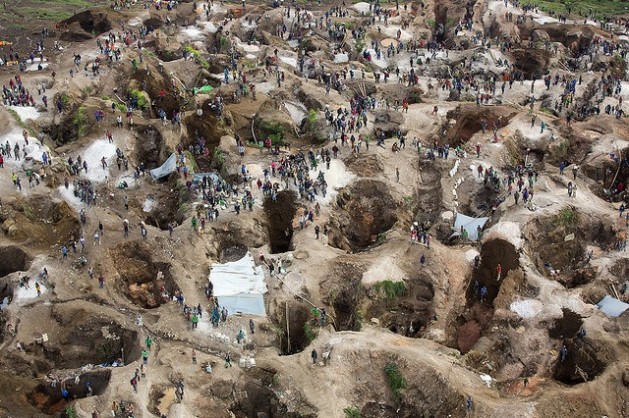 An aerial view of the Luwowo coltan mine, near Rubaya in the northeastern province of North Kivu, DRC. Credit: MONUSCO Photos/ CC-BY-SA-2.0

WASHINGTON, Jun 3 2014 (IPS) - For the first time, nearly 1,300 U.S. companies have filed reports on whether the products they manufacture or sell are made with minerals that have bankrolled conflict in the Great Lakes region of central Africa.

Monday was the deadline for the filings, the first concrete results of a provision passed in 2010 by the U.S. Congress aimed at helping to end the long-running civil war in the Democratic Republic of the Congo (DRC).

Yet the law’s regulatory details have since been the target of sustained legal attacks from companies and lobby groups that have warned that fulfilling the reporting requirements would be onerous and even unconstitutional.

“In general we’re very disappointed with how vague many of the reports are, lacking much description on processes.” -- Carly Oboth, policy advisor at Global Witness
By Tuesday, however, it appeared that most companies expected to file a report on the so-called conflict minerals in their supply chains had done so. Those reports are now publicly available through the Securities and Exchange Commission (SEC), the federal regulator tasked with implementing the rule, formally known as Section 1502.

“This is a historic day. Five years ago this issue wasn’t on anyone’s radar, and now consumers can look under the hood of what’s in a product,” Sasha Lezhnev, a senior policy analyst at the Enough Project, a Washington-based watchdog group, told IPS.

In 2009, the U.N. Security Council formally recognised that revenues from minerals extraction were strengthening multiple armed groups operating in eastern DRC. The electronics industry has been one of the most significant users of these minerals, which include tin, tantalum, tungsten and gold.

Since then, Lezhnev reports, 95 mines in the DRC have been validated as “conflict free”, while two-thirds of the tin, tantalum and tungsten mines in the country’s east have been demilitarised. Gold remains a significant problem, however, and the Enough Project and others are calling for more concerted action in tightening sourcing decisions, particularly from the jewellery industry.

Under the SEC guidelines, companies listed on U.S. stock exchanges must now file annual reports describing their efforts to discern whether their products use conflict minerals and, if so, their plans for stopping this practice. Several thousand U.S. companies have been identified as potentially – and likely unwittingly – selling products containing conflict minerals.

The consulting firm Booz Allen Hamilton has stated that it has been involved in the manufacture of circuit boards, electrical assemblies and surveillance recorders containing conflict minerals. Many of these products, the company noted, were manufactured for the U.S. government.

Yet most companies have reported incomplete results. Microsoft, for instance, states that it “cannot exclude the possibility” that its products contain conflict minerals, but also that it hasn’t yet been able to obtain full sourcing information from its “extensive and complex” supply chain.

Advocacy groups are also concerned that most companies aren’t providing information on what follow-up actions they took after surveying their suppliers, if any.

“In general we’re very disappointed with how vague many of the reports are, lacking much description on processes,” Carly Oboth, a policy advisor at Global Witness, a watchdog group that has supported the conflict minerals regulations, told IPS.

“We’re concerned with how companies have come to their conflict minerals status decision, as many are claiming that they’re ‘conflict indeterminable’ or ‘conflict free’ but not showing how they arrived at that conclusion. This isn’t supposed to be a box-checking exercise, but rather about showing that you’re not sourcing from a conflict zone.”

Global Witness says the majority of the reports that have been filed thus far have been “inadequate”.

For many companies faced with auditing their supply chains, a key chokepoint has been the metal smelters that turn raw resources into workable products. An industry-led initiative, the Conflict-Free Smelter Programme, has been particularly prominent, having so far certified around 40 percent of the world’s smelters, according to the Enough Project’s Lezhnev.

Yet Global Witness’s Oboth says many companies have simply ascertained whether their suppliers have this certification, and then gone no farther.

“Instead, what we want them to do – and what the [SEC] rule requires – is to follow up with the smelters,” she says. “Intel, for instance, has made site visits to smelters to check on their conflict minerals policy, to see how they’re actually identifying risk.”

Indeed, Intel, the microprocessor manufacturer, has in many regards been the most proactive company on the issue. In January, it unveiled the world’s first “conflict-free” product, and ahead of the recent filing deadline was the only company to offer a fully audited report on its supply chains.

Following an April court ruling that altered the original SEC rule, companies are no longer required to state whether or not a product is “conflict free” (though the court may rehear this case in coming months). Yet Intel, echoing advocacy groups and regulators, says such designations are important.

“One of our takeaways is around transparency. Although not required to disclose the status of our products, we believe this transparency shows our commitment on this issue to our customers and stakeholders,” Intel told IPS in a statement.

“We encourage other companies to also share their product conclusions as we all work towards validating our products as DRC conflict free. Product conclusions provide a useful and transparent method to communicate the progress of our due diligence efforts.”

Already the presence of a single conflict-free product on the market has spurred competition, and a similar dynamic is expected to result from Monday’s public filings.

“We’re already seeing other companies racing to make the next conflict-free product, and we’re encouraging consumers to urge the largest aerospace and automotive companies to take part,” Lezhnev stated.

“Intel’s step is a good one, but there are companies out there that are far bigger. For instance, when is Boeing or GE going to make the next conflict-free product?”