WASHINGTON, Jan 8 2014 (IPS) - Major manufacturing and business groups on Tuesday urged a court here to roll back a new U.S. regulation that would soon require major manufacturers to ensure that their global supply chains are free of minerals used to fund violence in the Great Lakes region of central Africa. 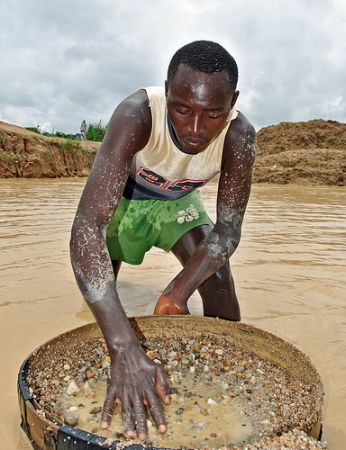 Yet the previous day, Intel, the major computer hardware manufacturer, announced the world’s first product formally dubbed free of such materials, stating that its microprocessors would no longer use “conflict minerals”. The announcement highlights trends that advocates of greater supply chain accountability say are already well underway, and which they suggest belie parts of the legal case against the rule.

“This provision has already catalysed reforms of the minerals trade in the Great Lakes region and has prompted both [U.S.] and Congolese companies to carry out supply chain due diligence and source minerals more responsibly,” Carly Oboth, an assistant policy advisor with Global Witness, a watchdog group, told IPS.

“According to consulting firm Claigan, in September 2013 2,946 companies were identified as having conflict minerals compliance programmes … Despite the appeal, many companies have already publically demonstrated the feasibility of the rule as they begin implementation to meet the May 31, 2014 reporting deadline.”

The U.S. Chamber of Commerce, the National Association of Manufacturers (NAM) and the Business Roundtable, all major lobby groups, say the new rules impose an undue financial burden on companies and infringe on constitutional guarantees of free speech. The groups say they are supportive of the aims of the regulation, known as Section 1502, but want significant tweaks and the inclusion of certain exemptions.

But supporters counter that the Securities and Exchange Committee (SEC), the country’s lead regulator of publicly listed companies, has already thoroughly weighed these issues.

“Generally we’ve been supportive of the SEC’s position and think they did extensive analysis before adopting the conflict minerals rule,” Julie Murray, an attorney currently acting as counsel for Amnesty International, a rights group that has joined the lawsuit in support of Section 1502, told IPS.

“The SEC received some 13,000 letters urging it to promptly adopt this rule, and we think the commission did an exhaustive job of looking at the issues – taking into account the concerns that were raised by these groups, and trying to make the rule cheaper and easier to comply with.”

The appeal follows a detailed and strongly worded legal decision in July that upheld Section 1502, which was mandated by Congress in 2010 but only finalised last year. As the regulation currently stands, by June large companies will need to certify the sourcing of a handful of minerals sourced from central Africa, while smaller companies will have a longer timetable.

In the appeal, a central issue in the court’s decision-making will be the estimates the SEC used to figure out the financial burden that Section 1502 would place on companies, upwards of four billion dollars in initial compliance costs followed by annual costs of 200-600 million dollars. Yet Murray suggests that companies will be able to bring these costs down as they learn how to comply with the new regulations.

“In general we think that it’s important that companies learn about the source of the materials they’re using – most consumers say they should know whether the materials they’re purchasing are responsible for rape, torture and murder in the DRC,” Murray says. “At the same time, this rule isn’t just about human rights, but also serves an important role in informing investors and consumers.”

On Tuesday, however, two of the three judges hearing the case appeared sceptical of several aspects of Section 1502. They raised concerns about the precedent that the regulation would set, the SEC’s capacity to create such a rule, and even the scope of the underlying law.

In 2009, the U.N. Security Council formally recognised that revenues from minerals extraction were strengthening multiple armed groups operating in eastern DRC. The electronics industry has been one of the most significant users of the minerals that have been singled out for scrutiny, which include tin, gold, tungsten and others.

Supporters of Section 1502 say that many businesses are showing strengthening interest in doing the work necessary to comply with the rule, both for brand and financial reasons. In this, Intel is widely seen as having made a uniquely serious effort to clean up its global supply chain.

“Two years ago, I told several colleagues that we needed a hard goal, a commitment to reasonably conclude that the metals used in our microprocessors are conflict-free,” Intel’s CEO, Brian Krzanich, said Monday. “We felt an obligation to implement changes in our supply chain to ensure that our business and our products were not inadvertently funding human atrocities in the Democratic Republic of the Congo.

(An Intel executive sits on the National Association of Manufacturers’ board and is thus technically a party to the current appeal. While a company spokesperson declined to comment on the case, on its website Intel notes that its “positions do not always align 100% with those of the industry and trade organizations to which we belong.”)

Intel called the achievement a “critical milestone”, while Krzanich said the it was “just a start. We will continue our audits and resolve issues that are found.” He also urged the rest of the electronics industry to follow suit.

Others say industry leadership from other sectors is equally important.

“Now that Intel has released the first conflict-free product, it’s time for other companies to do the same,” Sasha Lezhnev, a senior policy analyst with the Enough Project, an advocacy group here, told IPS. “Particularly for gold – it’s important for jewellers to take action, while aerospace companies also need to step up. This problem won’t be solved by just one company.”

Lezhnev recently returned from the DRC, and notes that Section 1502, despite having yet to come fully into force, has already played a “backbone” role in defunding armed groups in the eastern part of the country. Such groups, he says, are also far less present today in the mining areas.

“Smuggled minerals are now about a third of the price of the [certified] minerals, so the new price this rule helped to spur is offering a strong incentive to build up a conflict-free trade,” he says. “You’re seeing the disarmament of many armed groups … and while that is not only because of the new regulation, this rule is offering a strong incentive for them to not restart again.”