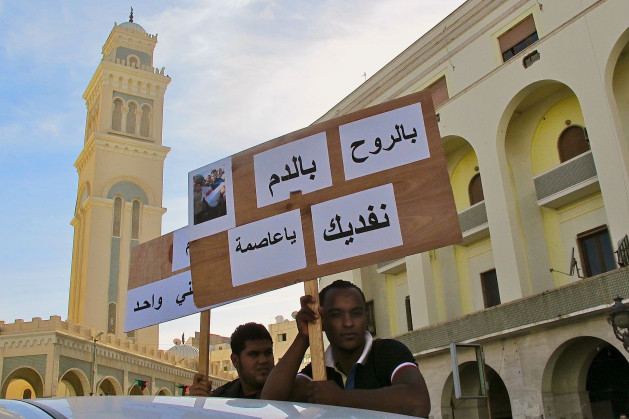 TRIPOLI, Nov 18 2013 (IPS) - Car accident in Omar Mokhtar Avenue in downtown Tripoli. Nobody was injured but there’s a bumper hanging off the back of a car. In just a few seconds, a group gathers around.

“Forget about insurance companies in Libya,” says Mansur, a 30-year-old satellite dish installer. “The main problem is that you can easily run into somebody who produces a gun; everyone carries one in their glove box. In such a case there are two options:

“You can get back to your car smoothly and leave, but you could also call a brother or a cousin of yours in one of those militias so he backs you up with heavy artillery.”

In Libya, the police and the army are names on paper to entities that do not exist on the ground. Security, or the lack of it, comes from the myriad insurgent groups who rose up against former dictator Muammar Gaddafi, but who only pay allegiance to local, or even individual, interests.

“So far we have avoided a new war thanks to a fragile balance of forces, but we are all aware that this cannot last much longer."

Government officials put their number at around 250,000. Nobody knows the exact figure.

But Libyans are increasingly angry since last Friday, when Tripoli witnessed the biggest spike in violence since the end of the war in 2011. A peaceful march meant to protest the impunity with which militias operate in the country’s capital ended up with 48 killed and almost 500 injured.

Local residents have been gathering in renewed protests such as the one in Algiers Square in central Tripoli last Sunday. Abdul Hamid Najah, a local lawyer, was there.

“Gaddafi would have reacted in the very same way, but we all knew he was ready to kill in cold blood. How could we possibly receive the same treatment from the very same people who helped us oust him? One of my neighbours was killed and another had to be taken urgently to Italy after he was badly injured.”

He says the “passivity” of the government is the main source of instability in post-war Libya.

“As long as militias remain in Tripoli, violence can only increase,” Mosarek Hobrara, another among the protesters and a human rights activist working for mediation from the Switzerland-based Centre for Humanitarian Dialogue, told IPS. The sooner they leave, the better for us Libyans.”

The 48-hour emergency declared by the Libyan government after Friday’s killings shut most of the otherwise busy centre of the Libyan capital. Local schools and the university also closed.

“In Tripoli I only feel completely safe in Gorji  (southwest of the capital) because the local militia is Amazigh,” Shokri, a member of Libya’s biggest minority group, told IPS.

“I usually go home on the weekends but always use bypass roads to avoid the main route across Aziziyah (south of the capital). That’s the territory controlled by the Warshafana tribe, who were loyal to Gaddafi.”

Some like Kemal Hassan make things simpler. He is one of the thousands of Tunisians currently working in Tripoli due to a dent in tourism back home. He says he never goes out after six. He hasn’t left the hotel at all since last Friday.

“There’s random shooting in the streets every now and then. Most here got used to it but I’m afraid I can’t.”

In fact, “random” describes much of Tripoli’s daily life. A group of four can suddenly pop out of a rickety car and start asking for “papers” to all those stuck in a rush-hour traffic jam. This IPS reporter was requested to hand his passport to a group of teenagers dressed in plain clothes but armed with assault rifles. But such harassment is a relatively minor problem.

Abu Muntalib was killed last Saturday by militiamen who broke into the Fallah refugee camp south of Tripoli. Muftar, who was displaced from what is now the ghost town Tawargha, shared the details with IPS:

“A group of men came on Friday night in a car with a Misrata sticker on the windshield and asked us whether we were from Tawargha. Four other men came back the following day; they aimed their rifles at our people, killing one and wounding two.”

Once a vibrant city of 30,000, Tawargha was turned in Gaddafi’s last days into his headquarters during a two-month siege of the rebel enclave of nearby Misrata, 187 km southeast of capital Tripoli. Displaced families handed IPS a list of relatives who had been allegedly kidnapped at gunpoint by Misrata militias over the last few weeks, the majority of them at the very entrance of the camp.

“We don’t dare to go outside but, as you see, even inside we can be assaulted,” Yousef Mohamed, a 20-year-old displaced person told IPS from inside the barracks where he was recovering from a gunshot in his left leg.

People from all walks of life complain about the dire security situation in their country. Wail Brahimi is one of those Libyans who returned from exile in the heat of the revolution “to help rebuild the country.” Two years after Gaddafi was brutally killed by rebels, this lawyer from the University of London is considering going back to the UK.

“So far we have avoided a new war thanks to a fragile balance of forces, but we are all aware that this cannot last much longer. Actually, we might well be on the brink of civil war after last Friday incidents.”